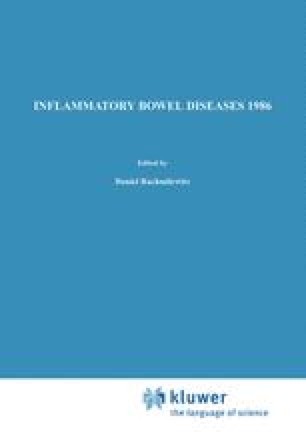 One hundred and twenty-five years have passed since Samuel Wilks of England in 1859 first described ulcerative colitis and probably also Crohn’s disease of the small bowel (inflammatory bowel disease - IBD). While studied in a few medical centers during this period, IBD has attracted worldwide attention only in recent years. The Second International Symposium on IBD, held in Jerusalem, September 9–11, 1985, is the latest such meeting, the previous one having been held in September 1981. Despite the increased clinical and investigative interest, the etiology and the pathogenesis of IBD remain obscure. Medical treatment continues to be largely empirical. Surgical techniques have improved, but ablative procedures, no matter how necessary or skilled, hardly represent the ideal solution.

Inflammatory Bowel Disease Ulcerative Colitis Lamina Propria Lymphocyte Common Enterobacterial Antigen Intestinal Mast Cell
These keywords were added by machine and not by the authors. This process is experimental and the keywords may be updated as the learning algorithm improves.

A11 at present known in medicine is almost nothing in comparison with what remains to be discovered. – R. Descartes (1596–1650)