Counteraction to Chemical and Biological Terrorism in East European Countries 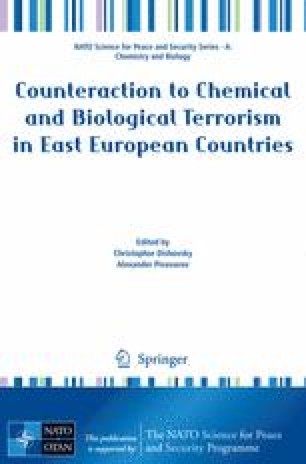 Strategies of Preparedness Response to Biological Warfare and Bioterrorism Threats

Conference paper
Part of the NATO Science for Peace and Security Series A: Chemistry and Biology book series (NAPSA)

Risks associated with deliberate use of biological agents against population and the needs for a strong public health system are well recognized. The potential use of biological agents is mounting every day, especially with growing political dissidence as well as social and economical conflicts in several countries. Countries in Eastern Europe have considerable vulnerability because of economical, social and political difficulties they are facing, along with inadequate response capacity and large number of outfits having continuous low intensity conflicts with established administrative system. There are no doubts that preparedness against biological weapons must be integrated in national disaster preparedness plan, as well as strengthen the core competencies of public health and other national and local authorities to respond to biological crisis, along with strong collaboration with other national agencies, like intelligence, defense and police.

Cite this paper as:
Paul F. (2009) Strategies of Preparedness Response to Biological Warfare and Bioterrorism Threats. In: Dishovsky C., Pivovarov A. (eds) Counteraction to Chemical and Biological Terrorism in East European Countries. NATO Science for Peace and Security Series A: Chemistry and Biology. Springer, Dordrecht