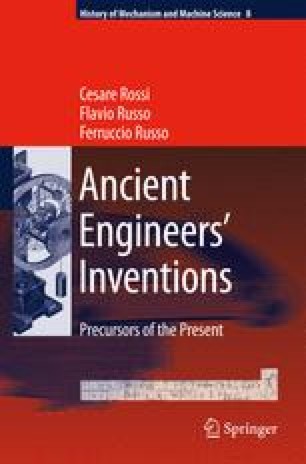 The first non-muscular source of energy used by man was wind energy; examples of wind motors, in fact, are very old. By wind motors we mean all the devices that create energy by using the kinetic energy released by the movement of an aeriform mass.

Since it does not have a specific volume or a precise mass, air occupies all available space, varying its intensity in accordance with the space in which it exists. Considering that warm air is lighter than cold air, the expansion of air is also a consequence of its temperature. Hellenic scientists were perfectly aware of this, although they may not have known that air was not an actual gas, or spirit as they called it, but an unstable mixture of numerous gases. Consequently, they considered it as the third element, without any additional distinctions and specifications apart from acquired certainties: it was indispensable to life, capable of rising when warm, of compressing significantly and of violent expansion, causing fast and whirling currents, actual aerial rivers capable of producing powerful thrusts. This latter characteristic they knew had a variable force, from a soft breeze to a devastating storm, and could facilitate or obstruct the movement of ships, according to whether it pushed in the direction of their progress or in the opposite direction.

Magnus Effect Paddle Wheel Virtual Reconstruction Wind Motor Powerful Thrust
These keywords were added by machine and not by the authors. This process is experimental and the keywords may be updated as the learning algorithm improves.
This is a preview of subscription content, log in to check access.