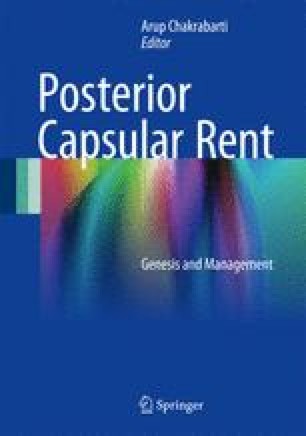 In the 1970s, Binkhorst two-loop and four-loop pupil-supported lenses were frequently used for implantation in Europe, especially in Holland. Intracapsular lens extraction was the common mode of surgery. Extracapsular surgery was being gradually developed. The problem with pupil-supported lenses was their frequent dislocation. To overcome this, Jan Worst introduced Medallion lenses, which carried slots for the passage of a suture which tied the lens to the iris. Earlier, the sutures were nylon that had the propensity to break; later, Jan Worst used vanadium steel. However, the suturing was not an easy procedure as there were no viscoelastic materials at that time. He hit upon the idea of having a lens that tied itself to the iris, an iris claw lens. Binkhorst lens had an optic that stayed in front of the iris, while its nylon loops stayed on the back of the iris. In contrast, iris claw lens was monoplane lens, with optic in the center, flanked by two rings, one on each side. Each ring haptic had a cut that made it work like the claw of a lobster. For fixation, a piece of iris was pushed into the claw. An iris claw lens, when in position, was away from the angle, away from the corneal endothelium; the pupil was free to dilate and contract, and there was no injury to the posterior pigment epithelium of the iris (as happened with Binkhorst lenses and sulcus-fixated lenses introduced in early 1980s). An iris claw lens was most versatile and suitable for most aphakic situations, at any age, any kind of cataract extraction (intra or extra), in any size of eye, primary or secondary implantation. It still remains most versatile as it was in the beginning. The implantation of iris claw lens has become easier than before because of the availability of viscoelastic materials and better control on cataract removal. In 1978, Dr. Pramilla Lall and Dr. Naval Christy used it after intracapsular extraction, in Mission Hospital Taxilla, Pakistan. We started using iris claw lens in 1979, and till today have an experience of nearly 140,000 cases including over 15,000 secondary iris claw lens implants in intracapsular aphakes. Iris claw lens use is now reduced, but remains a lens of choice under special conditions. Preexisting posterior capsule rent and the problems arising out of surgery in these cases bring in the use of iris claw lens.

Anterior Chamber Viscoelastic Material Intraocular Lens Posterior Capsule Lens Extraction
These keywords were added by machine and not by the authors. This process is experimental and the keywords may be updated as the learning algorithm improves.