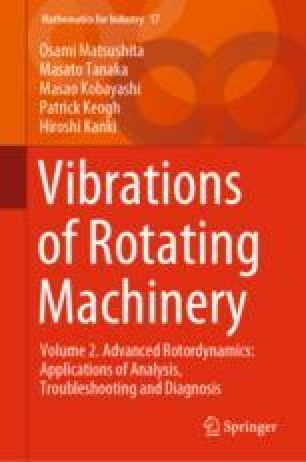 Chapter
Part of the Mathematics for Industry book series (MFI)

Oil-lubricated plain bearings are used widely to support the main rotors of rotating machinery, because the hydrodynamic oil films formed in the bearing clearances can guarantee smooth rotation of shafts and effectively prevent or suppress rotor vibrations. This chapter explains the principles of oil film formation in typical plain bearings, based on conventional hydrodynamic lubrication theory. The circumferential oil film shape at the steady-state equilibrium is determined, so that the hydrodynamic pressure generated in the oil film can balance the oil film reaction force vectorially with the applied bearing load. In other words, the oil film separates the journal from the bearing surface and the journal can float and rotate on the oil film. The oil film shape determines the journal center position represented by the journal eccentricity ratio and the attitude angle in polar coordinates. The steady-state journal center position and in turn the corresponding oil film shape vary with the operating condition of the journal bearing, that is, Sommerfeld number. When the journal center is slightly perturbed at the equilibrium, the oil film is slightly deformed, resulting in the slightly modified pressure distribution. Then, the corresponding oil film force is found to consist of the static reaction force at the equilibrium and also the two mutually perpendicular components of the small dynamic reaction force. Each of the two components is expressed by the linear sum of the two stiffness components and also the two damping components. In total, four stiffness components and four damping coefficients are determined at the equilibrium. These coefficients are the key factors that dominate the vibrational behavior of the rotor supported in the plain bearings. The coefficients obtained for various types of journal bearing are found to vary with the Sommerfeld number. Consequently, journal bearings need to be selected and designed so that the dynamic coefficients of the hydrodynamic oil films can enable satisfactory control of rotor vibration.