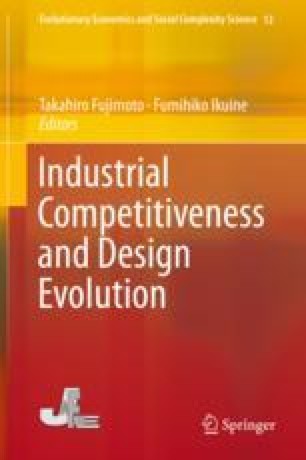 This chapter analyzes the behavioral patterns of genba-oriented firms, which pursue both target profit (markup) rates and stable employment, by using a simple evolutionary economic model with Ricardian cost function and design-based product differentiation, called the PXNW model, as opposed to the standard neoclassical profit-maximizing model of firms. Here, genba refers to a manufacturing site where value-carrying design information flows to the customers.

After illustrating the basic logic of the PXNW model, a process analysis is performed to explain the sequence of events and activities leading from a steady state to another steady state with lower prices or higher wages. Finally, we present several actual cases of Japanese local factories or small and medium manufacturing firms (SMEs) in various sectors whose behavior is consistent with the patterns of firm activities predicted by the PXNW model.

The process analysis shows that, when the production prices are stable, a genba-oriented firm can move from one steady state, achieving both goals of target markup ratio and stable employment, to another one with higher wages or lower prices, provided that it can simultaneously improve physical labor productivities (often through process innovations) and create effective demand (often through product innovations).

In brief, certain evolutionary economic models, such as the PXNW model, may better explain what was happening in the real economy with many genba-oriented firms during the Cold War and post-Cold War periods, particularly between the 1950s and the 2010s.