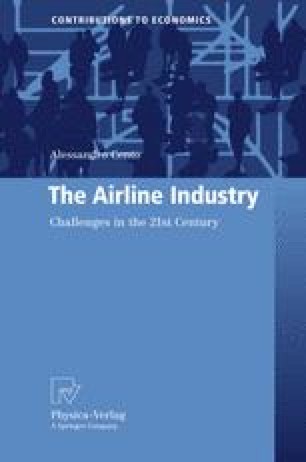 From the mid-1990s to the beginning of the new millennium, the aviation industry faced one of the biggest booms in its history. Worldwide increases in GDP, riding on the wave of the new economy, and a greater demand for travel resulting from globalization stimulated the airlines to healthy growth of around 4–6 percent per year. However, this tendency was not continued in subsequent years. At the beginning of 2000, the economic slowdown brought an end to the growth phase, and the terrorist attacks of 11 September 2001 and the SARS virus in 2003 exacerbated the situation. In 2004, the airline industry probably faced the most difficult period of its existence.

Terrorist Attack Airline Industry Aviation Industry Network Strategy Airline Network
These keywords were added by machine and not by the authors. This process is experimental and the keywords may be updated as the learning algorithm improves.
Download to read the full chapter text

Cite this chapter as:
(2009) Introduction. In: The Airline Industry. Contributions to Economics. Physica-Verlag HD