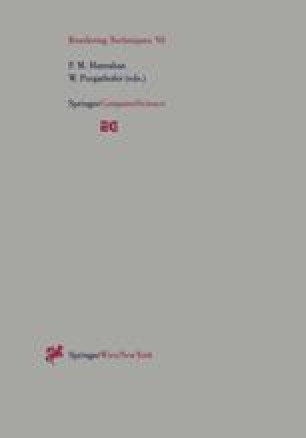 Surface illumination proceeds according to the strict rules of the reflection model, the light characteristics and the geometry of the scene. To get a given illumination effect on a surface in a fixed geometry, a user must determine the surface characteristics that will produce this effect. This process is part of what is called inverse illumination. In most current modeling systems, the user must rely only on intuition to perform this inverse illumination, which can lead to many modeling/rendering cycles to achieve a satisfactory result.

In this paper, we are concerned with the case where lighting effects are not merely a consequence of the geometry, but rather part of the design. We therefore concentrate our efforts on controlling the surface characteristics and present a tool which can reduce considerably the problem of inverse illumination by using a painting paradigm. An interactive system is provided where the user simply applies color points on a surface. The system then attempts in near real time to find the best values for the surface characteristics such that the points will retain their assigned color in the final rendering. Depending on the number of constraints (color points) given by the user, the solution is presented as a non-linear constrained optimization and a constrained weighted least-square fitting. We apply our solution to a simple illumination model using ambient, diffuse and specular components to illustrate our approach.

Initial Guess Specular Reflection Painting System Reflection Model Direct Illumination
These keywords were added by machine and not by the authors. This process is experimental and the keywords may be updated as the learning algorithm improves.
This is a preview of subscription content, log in to check access.