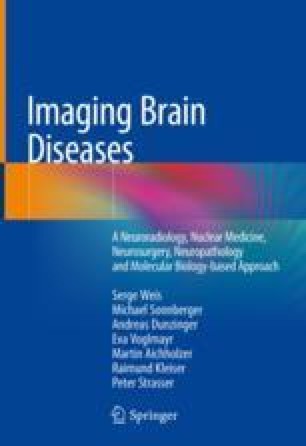 In neuroradiology, a decreased volume or disappearance of pars compacta of substantia nigra is noted; hypointensities of putamen, substantia nigra, and caudate nucleus are possible (as caused by iron accumulation). A presynaptic dopamine transporter deficit with SPECT tracers like FP-CIT or β-CIT is evident upon nuclear medicine examination.

At the light-microscopic level, loss of neurons in the substantia nigra and locus coeruleus, deposition of melanin pigment in the neuropil or macrophages, and surviving neurons with intracytoplasmatic Lewy bodies are the hallmark of the disease.

Lewy bodies are eosinophilic structures with a dense core and a concentric lamellar structure which stain positive for α-synuclein; thus, PD is an α-synucleinopathy. Six stages in the evolution of PD-related pathology are defined.