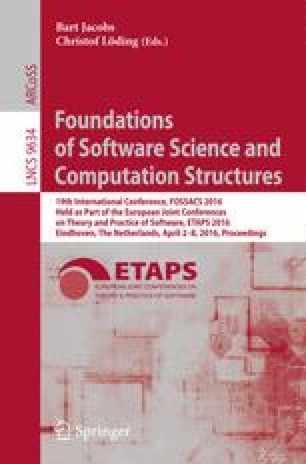 Reasoning About Call-by-need by Means of Types

We first develop a (semantical) characterization of call-by-need normalization by means of typability, i.e. we show that a term is normalizing in call-by-need if and only if it is typable in a suitable system with non-idempotent intersection types. This first result is used to derive a new completeness proof of call-by-need w.r.t. call-by-name. Concretely, we show that call-by-need and call-by-name are observationally equivalent, so that in particular, the former turns out to be a correct implementation of the latter.

There is a real gap between the well-known operational semantics of the call-by-name\(\lambda \)-calculus and the actual implementations of lazy functional languages such as Miranda or Haskell. Indeed, call-by-name re-evaluates an argument each time it is used – an operation which is quite expensive – while lazy languages store the value of an argument the first time it is evaluated, thus avoiding the need for any subsequent re-evaluations. For example, consider the term \(t_0 = \varDelta (II)\), where \(\varDelta = \lambda x. xx\) and \(I = \lambda z. z\). Call-by-name duplicates the argument II, while lazy languages first reduces II to the value I so that further uses of this argument do not need any more to evaluate it again.

However, lazy languages should not be confused with call-by-value: values are only consumed in the former when they are needed/required, thus completely ignoring the other arguments. E.g. if \(t_1 = (\lambda z. I) (II)\), the argument II is evaluated in call-by-value to produce the final answer I, whereas this evaluation does not take place in any lazy language (see e.g. [2, 3, 9, 13]). Said differently, lazy languages do not compute unneeded terms, and terms should not be duplicated unless and until they have been reduced to values.

According to the previous paragraphs, lazy languages cannot be modeled by call-by-name, nor by call-by-value; they are indeed specified by call-by-need, due to Wadsworth [30], and extensively studied e.g. in [1, 2, 3, 9, 13, 25].

Despite the fact that the equational theories of call-by-name and call-by-need are not the same [2], call-by-need is observationally equivalent (i.e. sound and complete w.r.t.) to call-by-name. The completeness result, operationally developed e.g. in [2, 25], is quite involved and makes use of different syntactical tools such as commutation diagrams, sharing, residual theory and standardization.

In this paper we make use of typing systems to provide a semantical argument showing that call-by-need and call-by-name are observationally equivalent. More precisely, we develop a new completeness proof of call-by-need w.r.t. call-by-name which follows from two different implications: every term having a normal form in call-by-name is typable and every typable term has a normal form in call-by-need. The second implication is obtained from a stronger characterization property stating that the set of typable terms and the set of call-by-need normalizing terms are the same. This result is completely new, and quite surprising, and constitutes one of the main contributions of this work.

The following list summarizes the more important points of our work:Related Works: Besides all the aforementioned works that use intersection types to characterize operational properties of \(\lambda \)-calculi, two other works make use of typing systems to reason about lazy languages. In [24], the resource conscious character of linear logic is used to explain call-by-need in the spirit of the Curry-Howard isomorphism. In [16] non-idempotent intersection types are related to needed redexes: a redex r in a term t is needed iff r, or some residual of r, is reduced in every reduction of t to normal form. Despite the use of similar typing techniques to identify needed redexes in well-typed terms, no full characterization of needed normalization is obtained in [16].

Structure of the Paper: Section 2 introduces syntax and operational semantics of call-by-name and call-by-need. Section 3 defines non-idempotent type assignment disciplines for both calculi. Section 4 (resp. Sect. 5) gives a characterization of \(\mathtt{name}\) (resp. \(\mathtt{need}\))-normalizing terms by means of the intersection type systems introduced in Sect. 3. Section 6 presents the completeness proof by using the semantical/logical arguments developed in the previous sections. Section 7 concludes and suggests some further directions of research.

The call-by-need calculus we use in this paper was introduced in [1]. It is more concise than previous specifications of call-by-need [2, 3, 9, 25], but it is operationally equivalent to them, so that the results of this paper could also be presented by using other alternative specifications.

It is well-known that the set of \(\mathcal{T}_{\mathtt{a}}\)-terms that are in \(\mathtt{name}\)-nf can be characterized by the following grammar:
Open image in new window

Similarly, \(\mathcal{T}_{\mathtt{e}}\)-terms in \(\mathtt{need}\)-nf can be specified by the following grammar:
Open image in new window

The proof proceeds by first showing that \(t \in \mathtt{Nae}\) iff t is in \(\mathtt{need}\)-nf and t is not an answer. Then the statement of the lemma follows. \(\Diamond \)

A last remark of this section concerns relevance. Indeed, given \({\varPhi } \triangleright _{\mathcal{S}} {{\varGamma } \vdash t{:}\sigma }\), not every free variable in t necessarily appears in the domain of \(\varGamma \). More precisely, both systems enjoy the following property, that can be easily shown by induction on derivations.

In this section we adapt the (standard) characterization of head-normalizing terms of the \(\lambda \)-calculus to our call-by-name calculus, i.e. we show that a term t is \(\mathtt{name}\)-normalizing iff t is typable in system \(\mathcal{V}\).

The characterization is split in two parts. The first one shows that typable terms in system \(\mathcal{V}\) are \(\mathtt{name}\)-normalizing, a result which is based on a weighted subject reduction property. In contrast to similar results for idempotent intersection type systems, which are typically based on reducibility arguments, quantitative information of type derivations, obtained by means of non-idempotent types, provides a completely combinatorial proof. This is exactly the place where the quantitative approach by means of non-idempotent types makes the difference. The second part of the characterization shows that \(\mathtt{name}\)-normalizing terms are typable in \(\mathcal{V}\), and is based on a subject expansion property.

We start with the subject reduction property which uses the following lemma.

Subject reduction can now be stated in the following form.

In order to show that \(\mathtt{name}\)-normalizing terms are \(\mathcal{V}\)-typable we use a subject expansion property, which needs the following lemma.

We can now state the following full characterization result of this section:

This section gives a characterization of \(\mathtt{need}\)-normalizing terms by means of \(\mathcal{A}\)-typability, i.e. we show that a term t is \(\mathtt{need}\)-normalizing iff t is typable in system \(\mathcal{A}\). At first sight, this result follows the same lines of Sect. 4, however, it is much trickier and requires the development of special tools dealing with need contexts. To the best of our knowledge, this is the first time that call-by-need normalization is characterized by means of typing technology.

The following lemma decomposes a type derivation of a term \(\mathtt{L}[t]\) into one derivation for the context \(\mathtt{L}\) and another one for the term t. Reciprocally, context and term derivations can be combined if their types coincide. The proof can be done by induction on \(\mathtt{L}\).

By induction on typing derivations (a similar proof appears in [17]). \(\Diamond \)

To complete the subject reduction argument we still need to guarantee that every needed variable of a typed term is necessarily typed, a property which is specified by means of the following lemma.

Subject reduction can now be stated in a combinatorial way, by using the \(\mathtt {sz}(\_)\) measure on derivations defined in Sect. 3.

To show that \(\mathtt{need}\)-normalizing terms are \(\mathcal{A}\)-typable we use a subject expansion property, which needs the following lemma.

By induction on t.

We can now state the full characterization result, which is one of the main results of this paper. The implication “typable terms in system \(\mathcal{A}\) are \(\mathtt{need}\)-normalizing” is obtained through the weighted subject reduction, which provides a completely combinatorial argument of this property, as in the call-by-name case. This is exactly the advantage provided by the quantitative approach based on non-idempotent types, which makes the difference with a qualitative system based on idempotent intersection types.

We can thus conclude with the last main result of the paper.

This paper gives the first full characterization of call-by-need normalization by means of intersection types. This result, together with the full characterization of call-by-name normalization, provides a new completeness proof for call-by-need, which is only based on logical arguments and does not make use of any complicated notion of rewriting. The use of non-idempotent types allows us to obtain the result in a combinatorial way, by providing quantitative information about reduction sequences, and without resorting to any reducibility argument.

The paper only considers a core language for call-by-need, but it would be interesting to consider other constructors of lazy languages, e.g. data constructors, case-expressions and Haskell’s seq operators. Moreover, the results in the paper could be extended to the cyclic call-by-need letrec calculus as well as to full (strong) need normal forms (ongoing work).

Last but not least, we would also like to use the ideas in [16] in order to relate call-by-need and needed reduction by means of intersection types.