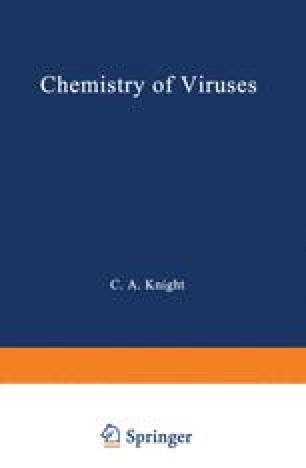 The chemical constituents described in the previous chapter are found in particles of diverse size and shape in the various viruses isolable from animals, bacteria, plants, and fungi. Despite the diversity of size and shape of different viruses, the size and shape of any one virus tend to be much more uniform than do the cells of a bacterium. This uniformity is reflected in the fact that many viruses can be crystallized whereas bacteria cannot. Some examples of virus crystals are shown in Figure 30. Note that a single virus crystal contains millions of virus particles as is nicely illustrated in the electron micrograph obtained by Steere and Williams (1953) of a partially dissolved crystal of tobacco mosaic virus. Thus, although a simple virus particle may consist of hundreds of molecules of protein and one or more molecules of nucleic acid, large populations of these particles often behave as though they were just molecules, crystallization of particles being one manifestation of this characteristic (behavior of virus particles in hydrodynamic tests such as electrophoresis or sedimentation is also molecular in character).

Virus Particle Tobacco Mosaic Virus Protein Subunit Morphologic Unit Icosahedral Symmetry
These keywords were added by machine and not by the authors. This process is experimental and the keywords may be updated as the learning algorithm improves.
Download to read the full chapter text