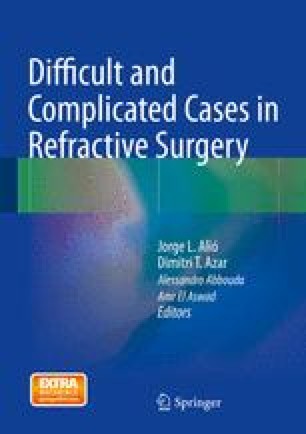 A refractive surgeon should be comfortable with handling complications during phakic IOL surgery, including accidental damage to the iris and crystalline lens.

Retinal Detachment Good Correct Visual Acuity Crystalline Lens Anterior Chamber Depth Anterior Capsule
These keywords were added by machine and not by the authors. This process is experimental and the keywords may be updated as the learning algorithm improves.

A 5.5 mm superotemporal scleral tunnel was used for the surgery from 7 to 12 o’clock. Paracentesis at 9 and 2 o’clock of 1 mm was performed. The anterior chamber was filled with viscoelastic. The Artisan was introduced through the scleral tunnel and was centered with the special implantation forceps (forceps of Worst-Fechner). The enclavation of the nasal and then the iris bridge was performed with an iris enclavation needle. The viscoelastic was removed and the incision was sutured. We decided to perform limbal relaxing incision at 1 mm with 2.4 mm knife. The knife was blunt and inadvertently, during the inferior incision, the knife cut the iris and anterior capsule. Hydro sutures were performed (MPG 72700 kb)