Viruses and the Lung 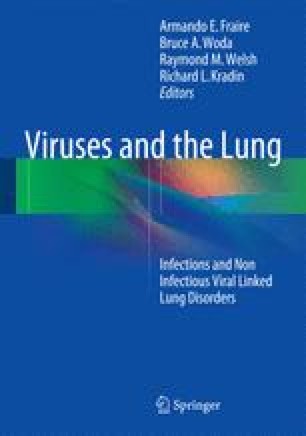 The origin of viruses is not known. It has been hypothesized viruses may have evolved from DNA or RNA nucleic acid components of host cells that became able to replicate autonomously and independently, resembling genes that have acquired the capacity to exist on their own (Brooks et al. 2010). There is no evidence that viruses evolved from bacteria, though other obligately intracellular organisms, e.g., rickettsiae and chlamydiae, presumably did so (Brooks et al. 2010).

The origin of viruses is not known. It has been hypothesized viruses may have evolved from DNA or RNA nucleic acid components of host cells that became able to replicate autonomously and independently, resembling genes that have acquired the capacity to exist on their own (Brooks et al. 2010). There is no evidence that viruses evolved from bacteria, though other obligately intracellular organisms, e.g., rickettsiae and chlamydiae, presumably did so (Brooks et al. 2010).

Viruses are very small infectious agents (ranging from about 20 nm to about 300 nm in diameter) and contain only one kind of nucleic acid encased in a protein shell, which may be surrounded by a lipid-containing membrane. The entire infectious unit, although very small (termed a virion), can be exceedingly complex (Ryan George Ray 2010) (Fig. 1.1). Viruses are inert in the extracellular environment; they replicate only in living cells, being parasites at the genetic level (Brooks et al. 2010). During the replicative cycle, numerous copies of viral nucleic acid and coat proteins are produced. The coat proteins assemble together to form the capsid, which encases and stabilizes the viral nucleic acid against the extracellular environment and facilitates the attachment and penetration by the virus upon contact with new susceptible cells. The virus infection may have little or no effect on the host cell or may result in cell damage or death (Brooks et al. 2010). As noted viruses are exceedingly small in size and are best visualized with the aid of the electron microscope. However, some viral particles may aggregate within the cells they infect forming characteristic inclusion bodies, which are visible with the light microscope and are useful for diagnosis (McAdam and Sharpe 2010). Examples include inclusion bodies of infections secondary to herpes, rabies, small pox, measles, and the well-known inclusion bodies of CMV infection (Figs. 1.2, 1.3, and 1.4). Concurrent with the development of these inclusions, fusogenic properties imparted upon the host cells by the viral particles will often but not always result in multinucleation, a phenomenon appreciated in the same Figs. 1.2, 1.3, and 1.4.
Viruses may preferentially infect tissues and organs of selected systems but are virtually capable of damaging any organ or tissues in the human host. Clinical respiratory manifestations of pneumotropic viruses are varied; some of these are outlined in Fig. 1.5 (Corrin and Nicholson 2006). Viruses primarily affecting the upper respiratory apparatus (rhinoviruses and non-SARS corona viruses) are not discussed here. In this volume, we are primarily concerned with viruses affecting the lung but recognize that pneumotropic viruses have the potential to infect other anatomical sites resulting sometimes in complex multisystem disease entities. Likewise, viruses that primarily target other organs or systems such as the gastrointestinal tract or the central nervous system may also secondarily involve the lung (Table 1.1) (Corrin and Nicholson 2006).
Table 1.1

Acute viral respiratory tract infections remain a leading cause of morbidity, mortality, and economic loss. Although often self-limiting in healthy adults, these infections are responsible for a substantial loss of productive time and are important factors in the illness and death of the very young, immunocompromised individuals, and elderly individuals (Gillim-Ross and Subbarao 2006). In the last 10 years a number of novel human viral respiratory pathogens have been identified, leading to a heightened level of awareness and the development of measures to control them. The identification of novel viruses is both a result of the application of new, more sensitive techniques enabling the detection of viruses that have been circulating in the human population for years and the result of the recent introduction of viruses into the human population (Gillim-Ross and Subbarao 2006).

Interactions between animals and the human host are critical elements in the epidemiology of some viral illnesses (Bhatia and Narain 2010). Diseases transmitted from animals have assumed substantial public health importance. Avian influenza, severe acute respiratory syndrome (SARS), and Nipah virus infection are examples of a growing number of diseases that humans can contract from animals. These diseases can cause huge economic losses in addition to mortality and morbidity. In certain areas of some developing Asian countries, there is a continuous and close contact between animals and humans, especially in rural settings. The prevailing sociocultural practices and weak public health infrastructure further enhances the vulnerability of Asia and the Pacific Islands as the epicenter of outbreaks due to zoonotic infections. There is a clear need for greater awareness and application of a multisectoral and multidisciplinary approach to prevent and control zoonotic infections (Bhatia and Narain 2010). In recognition of said interactions between various animal species and human hosts, this volume contains a chapter of important animal pathogens, including some with potential to generate pandemics (Bhatia and Narain 2010).

The threat of avian influenza to the human population and the potential for the reemergence of SARS-associated coronavirus underscore the necessity for the development of therapeutic and preventive strategies to combat viral infection (Franks et al. 2003). Vaccine development is a key component in the prevention of widespread viral infection and in the reduction of morbidity and mortality associated with many viral infections (CDC 2000; Franks et al. 2003). Regrettably, the efficacy of vaccines has not been as adequate as may be expected in human respiratory infection due to viruses; see  Chap. 11, Respiratory Syncytial Virus. The threat of emerging infectious agents responsible for disease other than influenza and SARS as potential agents of bioterrorism is a major public health concern and is closely monitored by agencies such as the Centers for Disease Control and Prevention (Table 1.2) (CDC 2000).
Table 1.2

Adapted from data derived from the Centers for Disease Control and Prevention. Atlanta, GA

The way in which viruses are characterized changes rapidly, with genomic sequencing now affording accurate identification of new virus families and species. A variety of features other than genomic sequencing have been used as bases for the taxonomic classification of viruses. These features, including antigenicity, virion morphology, and physicochemical characteristics, are useful aids contributing to the classification of viruses and are described in the next chapter, dedicated to the taxonomy of viruses.