Bats (Chiroptera) as Vectors of Diseases and Parasites 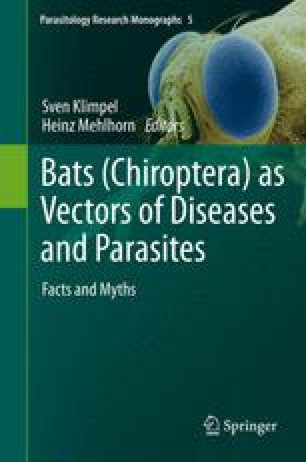 Introduction: The World of Bats

Bats are unique flying mammalians that occur worldwide feeding either on insects, fruits or even on blood depending on the species. Since they are active during the night, many myths have been launched during the last 500 years. All these facets are shortly considered here and prepare for a hopefully intense look into their hidden life.

Bats Chiroptera Vampire bats Vectors of diseases Chupacabras Batman Mammalia Ultrasound Parasites Flies Lice Louse flies Sheep milker Blood sucking Morphology Reproduction
Download chapter PDF
Bats—their English name points to their fluttering up and down wing movements—are a peculiar group of the so-called Mammalia (= animals with breast nipples) in the Zoological System, where they are described as Chiroptera (Greek: cheir = hand, pteron = wing) (Neuweiler 1993; Niethammer and Krapp 2004, Claus et al. 1932). This term refers to their morphological peculiarity that thin portions of leathery skin (Plagiopatagium, Propatagium, Dactylopatagium and Uropatagium) are stretched between the body and all fingers reaching from there to the knuckles of both feet (Claus et al. 1932; Fig. 1.1). These skin portions can be folded, when the bats rest in their typical position: head down under (Figs. 1.2 and 1.3), fastholding by help of the claws and their five toes at each foot. Their size may vary considerably between the different species. There exist rather large species (e.g. Macroderma gigas in Australia), which reach a body length of up to 20 cm, show a “wingspan” of up to 60 cm when stretched and weigh nearly 200–250 g. The smallest species (e.g. Craseonycteris thonglongyai) have a body length of about 3 cm at the maximum and a body weight of only 2 g thus belonging to the smallest mammalians at all. The body of all bats is covered with very fine, shiny (often brownish) hair. Bats are active at night seeking their food, which consists—depending on the species—of insects, fruits or even of blood. Since their rather quick flight is absolutely silent, so that they may approach and pass humans like a dark flash, many fairy tales developed in different human cultures (Chaps. 7, 8). Thus, their hidden way of life caused fear, especially in those cases, when many bats fly simultaneously around houses or around heads of persons, since they live together in groups of often more than 100–150 animals hiding themselves during daytime in the treetops (e.g. plant eating flying foxes e.g. in Australia) or in tunnels of railways, galleries of closed mines, in old, rottening empty buildings on practically all continents except for Antarctica. This peculiar way of life and their strange behaviour at night led to the fact, that for a long time the knowledge on their morphology and their mode of reproduction was scarce. Thus it was a big surprise when it was discovered, that these animals give birth to their offspring and do not lay eggs at hidden places. In general, they bear only one “baby” per year, although they possess two nipples at their breast. During the flight of the mother, the young bats are transported being attached to the hair of mother’s belly often biting into one of the nipples for further stabilisation during the flights.

Absolutely surprising was also the discovery that the bats support their nightly flights not only by excellent eyes, which can catch even remnants of light, but also that they have developed a system of expelling ultrasound waves (Holland et al. 2006; Skiba 2009), a system of perception of the repelled waves and in addition they possess a nerve system, which allows them to react and to steer their muscles in milliseconds in order to avoid crashes with invisible obstacles in the night. These inventions are not unique, however, extremely scarce in the animal kingdom. It is less than 100 years that humans detected these waves, which reach far beyond the border of human hearing ranging up to 200 kHz. Thus the bats are extremely interesting with respect to their abilities and activities. While bats in warm countries are active all year around, the European species hibernate.

On one side most of the bats—especially the insect feeders—are very useful for humans and thus are strictly protected, since their breeding places are endangered, especially in the surroundings of the growing industrial cities. On the other side, some of the species damage fruit plantations by eating fruits or just by biting into fruits in monocultures in Australia and Southeast Asia (Figs. 1.2 and 1.3). A few bat species in South and Central America (Chap. 7) even suck blood of animals staying on meadows at night. These hosts are injured by the sharp and pointed teeth of the vampire bats, suffer from blood loss and even may become infected by pathogens such as those of true rabies (Lyssa virus). Indeed there exist several more of such bat transmitted viruses. Therefore, also the harmless and very useful species that feed on insects have recently been set in the focus of scientific interest, since they are now known also as possible true or mechanical vectors of severe agents of diseases (especially of viruses) that may hit humans and animals (see Chap. 3), if they get in contact with bats or their infected faeces (Drosten 2012). Especially Drosten’s laboratory and the microbiological institute of the University of Hong Kong showed that numerous bat species were carriers of the human-associated Corona virus (SARS-CoV). In total, eight variations had been characterised (http://covdb.microbiology.hku.hk:8080/COV-newpages/index.html).

Thus, this book is designed to present some interesting and important features on the biology, morphology, reproduction and the potential vectorship of bats on one side and to throw a glimpse on the mysterious beliefs that are still whispered today when bats are flying (Fig. 1.4).

Thus this book comprises several chapters of different length that deal with some of the most interesting and most important findings in bat research. However, it is evident that there remain many more surprising news to be detected in the future.