New Frontiers in Engineering Geology and the Environment 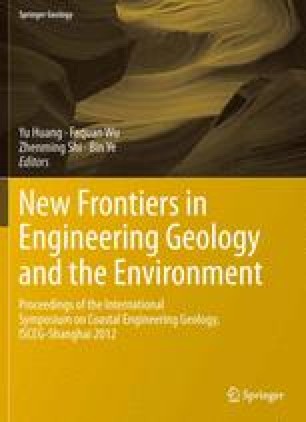 Adipala 1 × 660 MW power plant stands between Serayu River mouth and Bengawan River mouth, about 15 km east of Cilacap city, south Java Island, Indonesia. Marine structures constructed for the coal-fired power plant, include unloading wharf, breakwaters, C. W inlet, C. W outlet and other relevant structures. In order to improve and optimize design plane layout, it is necessary to forecast sediment movement. According to the Hydro-meteorology, sediment survey data and design option, based on the results of wave, current numerical models and sediment movement analysis, the siltation mechanism of harbor basin is analyzed. On the basis of verifying the siltation of opening channel and harbor basin on S2P CFPP (nearby this project), the siltation after project constructed and the effect of alongshore sediment is tested. Because of weakly tidal current (maximum velocity of field survey is less than 0.30 cm/s) and sediment concentration (less than 0.01 kg/m3), the movable-seabed physical model(Horizontal scale is 120, vertical scale is 60) test is carried out under the wave action due to the strong swell and long wave period (exceed 10 s). The results shows that siltation thickness is about 0.02–1.91 m/a (the average value is 0.52 m/a) and the deposition volume is about 16.8 × 104 m3/a in harbor basin after project constructed. And, siltation happened at the root of west breakwater, but it will be more than 30 years when the long-shore sediment transport around the breakwater’s head.