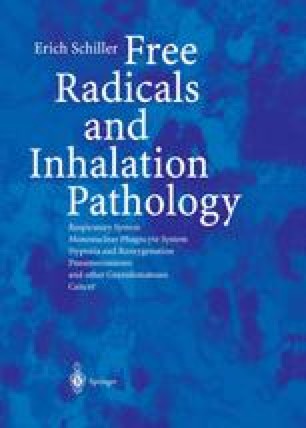 The term “radical” is often used loosely in chemistry to refer to various groups of atoms that behave as a unit, such as the carbonate radical (CO 3 sup2- ), nitrate radical (NO 3 sup- ), and the methyl radical (CH3p-). According to this definition, Lavoisier (1789) has already indicated that the four elements: phosphorus, sulphur, carbon, and hydrogen not only by themselves can take up oxygen, but may also mutually combine to likewise oxidizable compounds. Berzelius (1817) formulated: in inorganic nature all oxides contain a simple radical, while all organic compounds are oxides of composed radicals; the radical of vegetable matter mostly consists of carbon, that of animal matter besides carbon contains nitrogen.

Nitric Oxide Nitric Oxide Singlet Oxygen Xanthine Oxidase Respiratory Burst
These keywords were added by machine and not by the authors. This process is experimental and the keywords may be updated as the learning algorithm improves.
Download to read the full chapter text