Molecular Biology of the SARS-Coronavirus 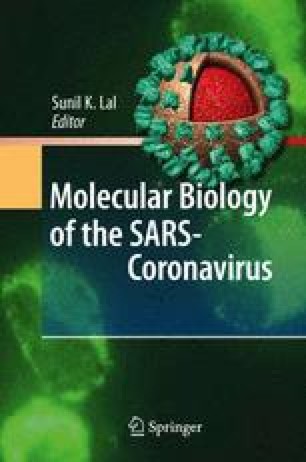 Molecular Biology of the SARS-Coronavirus pp 279-288 | Cite as

Neutralization assays allow for sensitive detection of functional antibody responses directed against the surface protein envelopes of many viruses. For high-containment viruses like SARS coronavirus (CoV), however, these assays are not widely applicable due to the requirement for high biosafety laboratory facilities and specially trained personnel. In order to effectively address this containment issue, retroviral pseudotypes have been used as surrogates of the live virus for neutralization assays. The pseudotype-based neutralization assay system is highly flexible, allowing for a choice of reporter systems, and is readily adaptable to newly emerging virus strains.

Severe Acute Respiratory Syndrome Neutralization Assay Neutralize Antibody Response Pseudotype Virus Virus Neutralization Assay
These keywords were added by machine and not by the authors. This process is experimental and the keywords may be updated as the learning algorithm improves.
Download chapter PDF

The coronavirus that causes severe acute respiratory syndrome (SARS-CoV) is a relatively new human pathogen for which a vaccine will be urgently required should this virus reemerge and new outbreaks occur.

The SARS-CoV genome encodes four structural proteins, the spike (S), membrane (M), envelope (E), and nucleocapsid (N) proteins. The S protein is the major surface antigen of the virus, and the antibody response is primarily directed against this protein. Preclinical studies of SARS-CoV vaccines provide evidence that generating a strong neutralizing antibody response to SARS-CoV S may protect against SARS infection. Many methods of detecting and measuring antibody responses against SARS-CoV have been developed and include IFA, ELISA, ICT, Western blot and virus neutralization (Bermingham et al. 2004; Wu et al. 2004).

Neutralization assays allow for sensitive detection of functional antibody responses directed against the surface protein envelopes of many viruses. For high-containment viruses like SARS-CoV and influenza H5N1, however, these assays are not widely applicable due to the requirement for high biosafety laboratory facilities and specially trained personnel. In order to effectively address this containment issue, retroviral pseudotypes have been used as alternatives to the live virus. These pseudotypes carry the retroviral RNA genome coding for marker genes (GFP, luciferase and beta-galactosidase (β-gal) are the most frequently used). The RNA genome is packaged by retroviral core proteins, but these viral cores bear foreign, often nonretroviral envelope proteins on their surface. Pseudotype infection, i.e. transfer of their genome (containing the transfer/marker gene) to target cells, depends on the function of the foreign envelope proteins and results in integration and subsequent expression of the marker gene. The function of the foreign envelope can therefore be detected/quantified by measuring marker gene expression. Using retroviral particles pseudotyped with the envelopes of high-containment viruses as “surrogate viruses” for use in neutralization assays is highly advantageous. Using a pseudotype approach, only the envelope protein(s) of the high-containment virus is required, with no possibility of recombination or virus escape. These pseudotypes undergo abortive replication and are unable to give rise to replication-competent progeny (Temperton and Wright 2009).

Safety considerations aside, for virus neutralization assays, pseudotypes are excellent serological reagents as they encode reporter genes and bear the heterologous viral envelope proteins of interest. The transfer of these reporter genes to target cells depends on the function of the viral envelope protein; therefore the titre of neutralizing antibodies against the envelope can be measured by a reduction in reporter gene transfer. These assays are also readily adaptable to a high-throughput format for use in vaccine evaluation, antiviral screening/resistance assays, monoclonal antibody screening and large sero-surveillance studies.

SARS pseudotypes are routinely constructed using a three-plasmid transfection approach (Fig. 17.1). Construction of retroviral pseudotypes is achieved through the concurrent introduction of a SARS spike (S) envelope gene, core retroviral genes and a marker/reporter gene into producer cells, normally HEK 293T cells as they transfect efficiently, although other cell lines may be used;

Plasmid 2: The retroviral gag–pol construct. These are the two genes that encode the structural proteins (e.g., matrix, nucleocapsid and p7 expressed from gag) that comprise the core, and the enzymatic proteins (reverse transcriptase, protease and integrase expressed from pol) responsible for processing the structural proteins and ensuring integration of a dsDNA copy of the marker/reporter gene. Additionally in a lentiviral gag–pol construct, the rev gene is included for efficient processing.

Plasmid 3: The marker/reporter gene construct. This is the gene that is stably integrated into the target/assay cell DNA. Where it is expressed via a single plasmid, a packaging signal is engineered upstream of the gene to ensure efficient incorporation of full-length RNA copies of that gene into the pseudotype capsid. Once integrated, the gene is expressed via various cis-acting transcriptional elements. It should be noted that the marker/reporter gene construct is not required for pseudotype production and mature particles will be produced by a two-plasmid transfection of a gag–pol construct and a SARS spike (S) envelope construct. Also, pseudotypes lacking the SARS spike (S) envelope will bud but will be noninfectious.

As an alternative to using the three-plasmid transfection system for producing SARS pseudotypes, all of the necessary genes can be transfected via either one or two plasmids. Using three plasmids as detailed here, however, offers the greatest ease and flexibility (switch of plasmids, minimal cloning required), and safety (less chance of recombination) as the envelope, core and reporter genes are expressed from different plasmids. The flexibility of the system enables tailoring construction of the SARS pseudotypes depending on experimental requirements. After transfection the pseudotype virus is harvested and stored at −80°C until required for neutralization assays (Fig. 17.2).

Spike (S) proteins from other coronaviruses have also been efficiently incorporated into pseudotypes. Retroviral pseudotypes have been used to study receptor-mediated entry of the feline coronavirus, FCoV (Dye et al. 2007) and human coronaviruses NL63 and 229E (Hofmann et al. 2005). This powerful system is likely therefore to have pan-coronavirus applicability for virological and immunological studies.

If SARS-CoV were to reemerge and result in new human outbreaks it would be straightforward to update these neutralization assays to measure responses against newly emerging antigenic variants. Upon availability of viral RNA/cDNA or sequence information of the newly emergent SARS virus (from public nucleotide sequence databases such as the National Center for Biotechnology Information database held at http://www.ncbi.nlm.nih.gov/), the spike gene can be PCR-amplified or synthesized and retroviral pseudotypes prepared for use in downstream neutralization assays. With the cost of whole gene synthesis decreasing year on year, this is a viable proposition for the development of such serological assays, as access to the wild-type virus is often severely limited to a small group of laboratories (WHO, CDC, HPA etc.). These newly developed assays can be used to address the cross-clade neutralizing potential of candidate human vaccines and immuno-therapeutics (monoclonal antibodies etc.). They can also been used for the evaluation of anti-S virus entry inhibitors and could readily be adapted for sero-surveillance studies in new outbreak locations.

Other methods for the titration and standardization of these retroviral pseudotypes are RT-PCR to determine virus particle number, ELISA to determine Gag levels (HIV or MLV Gag) in the retrovirus cores, and the measurement of surface envelope (SARS-CoV spike) content. Surface content may be measured by ELISA, as was recently shown for influenza H5N1 pseudotypes (Su et al. 2008).

In order for these pseudotype-based assays to have wide applicability within different laboratories, the availability of different reporter systems is highly desirable (Fig. 17.3). The HIV GFP reporter module pCSGW described recently for use in viral neutralization assays (Temperton et al. 2005, 2007; Wright et al. 2008) has been modified by PCR subcloning to express alternative reporters. These are firefly luciferase (Temperton et al. 2008; Wright et al. 2008), renilla luciferase (Capecchi et al. 2008) and β-gal. Of the three assay types, those based on luciferase reporter are the simplest to use in terms of operator time and data evaluation. However, due to the high cost of the necessary reagents (luciferase assay kits) and necessity for specialized equipment (luminometer), these assays may have limited applicability for laboratories in resource-poor regions. GFP and other fluorescence protein-based assays (RFP, YFP) do not require any additional assay reagents but do necessitate the availability of specialized equipment (fluorescence microscope with interchangeable colour filters, or a 96-well plate flow cytometry/FACS facility). The β-gal-based assays are the most cost-effective, as the required assay reagents are readily available at low cost, and specialized equipment is unnecessary. The expression of β-gal can be quantified by counting infected cells using a microscope following staining with X-gal (5-bromo-4-chloro-3-indolyl-β-d-galactopyranoside). However, there are two colorimetric substrates, ONPG (o-nitrophenyl-β-d-galactopyranoside) and CPRG (chlorophenol red-β-d-galactopyranoside) that allow the assays to be evaluated using a microplate reader. Alternatively an automated procedure using an ELISPOT reader to count X-gal stained blue cells may be used (Han et al. 2004). Finally, the availability of multiple reporters for use in these assays also lends itself to the development of multiplex assays which would facilitate the measurement of neutralizing antibody responses against surface glycoprotein envelopes derived from two (or more) different virus families (e.g., SARS-CoV and H5N1 for sero-surveillance in wet markets).

17.7 Correlation with Other Immunological Assays

Once suitable SARS-CoV pseudotype neutralization assays have been established, studies can be readily performed comparing these new surrogate assays with conventional live virus neutralization assays and other parameters of immune responses to SARS-CoV infection. Nie et al. have compared titres of neutralizing antibodies in 12 serum samples analyzed with pseudovirus and live SARS-CoV neutralization assays and found a strong correlation between the two (Nie et al. 2004a). Temperton et al. showed correlation data for neutralizing antibody titres measured by plaque reduction assay versus titres measured with a pseudotype assay at both 50% and 90% inhibition of virus entry end-points. Correlation coefficients for live virus versus 50% and 90% pseudovirus inhibition were 0.78 and 0.69 respectively (Temperton et al. 2005). Zhang et al. studied temporal changes in N protein-specific (by quantitative ELISA) and S glycoprotein-specific neutralizing antibody responses (by SARS-CoV pseudotype assay) in infected patients who had either recovered from or succumbed to SARS-CoV infection (Zhang et al. 2006). A good correlation between strong antibody responses to N and S proteins and disease outcome of infected individuals was shown. In a large comprehensive study on 128 SARS convalescent patient sera, strong T-cell responses were shown to correlate significantly (p <0.05) with higher neutralizing antibody titer as measured by an MLV(SARS) assay (Li et al. 2008).

In conclusion, SARS pseudotypes will enable much work that currently needs to be performed in Category III/IV laboratories to be undertaken with pseudotypes in a Category II environment. They represent a highly flexible and sensitive system for the evaluation of neutralizing antibodies against the spike surface glycoprotein.

Given that Research Councils UK and the Health Protection Agency (HPA) are currently inviting consultation on the UK national need for investment in high containment laboratories, it should be emphasized that the application of pseudotypes to highly pathogenic enveloped viruses such as SARS, H5N1 influenza A, rabies, West Nile and other high containment viruses can help to some extent to alleviate the pressure on expensive containment facilities.

I would like to thank Edward Wright for invaluable assistance in the preparation of the figures, and Robin Weiss for his encouragement and mentorship.

Cite this chapter as:
Temperton N.J. (2010) The Use of Retroviral Pseudotypes for the Measurement of Antibody Responses to SARS Coronavirus. In: Lal S. (eds) Molecular Biology of the SARS-Coronavirus. Springer, Berlin, Heidelberg