Humidification in the Intensive Care Unit 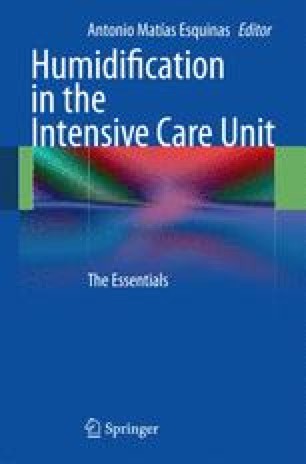 Humidification in the Intensive Care Unit pp 171-177 | Cite as

Dead Space Filtration Efficiency Breathing Circuit Anesthesia Machine Inspiratory Limb
These keywords were added by machine and not by the authors. This process is experimental and the keywords may be updated as the learning algorithm improves.
Download chapter PDF

Respiratory filters (also known as bacterial or microbial filters) are devices with a high capacity to prevent the passage of microorganisms [1] and are placed in the breathing circuit in order to protect the patient from possible respiratory infections carried by the respirator.

The use of respiratory filters was proposed after the reports between 1952 and 1972 of several outbreaks of respiratory infection attributed to contamination of anesthesia machines [2, 3, 4].

However, the results of later studies showed no contamination of patients by anesthesia machines, and vice versa [5, 6, 7, 8, 9], and that they could have undesirable effects [10] and did not decrease the incidence of ventilator-associated pneumonia (VAP) in clinical studies [11, 12, 13]; therefore, its usefulness is questioned.

The internal component of the filters can be composed of different materials [1]: wool, foam, paper, polypropylene, polysulfone, ceramics or glass fibers.

20.5 Insertion in the Respiratory Circuit

20.6 Functions of the Filters According to Their Location in the Breathing Circuit

20.7 Disadvantages of the Respiratory Filters

20.8 Advantages and Disadvantages of the Different Types of Respiratory Circuits Based on the Location of the Filters

The different breathing circuits used, based on the location of respiratory filters in the circuit, have different advantages and disadvantages. In a breathing circuit with one filter, the filter is interposed between the “Y” part and the endotracheal tube. The advantage of a filter circuit with one filter is that the initial economic cost is lower (because there is only one filter). The disadvantages of using one filter are the increased dead space in the circuit and that the filter has to be changed often as it gets contaminated by patient secretions from coughing.

The advantages of circuits with two filters are that there is no increasing dead space and no risk of having to change filters because of contamination by patient secretions. The disadvantage of using two filters is that the initial breathing circuit is more expensive (because there are two filters).

The issue of whether contaminated ventilators and anesthesia machines are the origin of nosocomial pneumonia is controversial, with some data implicating them [2, 3, 4] and others not [5, 6, 7, 8, 9].

Reports from 1952 to 1972 on several outbreaks of respiratory infections attributed the contamination to anesthesia machines [2, 3, 4]. However, none of the reports presented a bacteriological demonstration of a cause-and-effect relationship; however, the study by Tinne et al. reported that the same isolate of Pseudomonas aeruginosa responsible for an outbreak of postoperative pneumonia was cultured from the corrugated tubing of an anesthesia machine and from Ambu bags [3].

20.10 Efficacy of the Respiratory Filters to Reduce the Incidence of Ventilator-Associated Pneumonia (VAP)

In an attempt to prevent ventilator-associated pneumonia by contamination of respirators and anesthesia machines, inserting respiratory filters in the breathing circuits has been proposed.

However, in clinical studies respiratory filters have failed to reduce the incidence of ventilator-associated pneumonia in patients on anesthesia machines [11, 12] and in critically ill patients [13]. In 1981, Garibaldi et al. [11] examined 520 patients on anesthesia breathing circuits with filters (inspiratory and expiratory) or without filters, and found no difference in the cumulative incidence of ventilator-associated pneumonia (16.7% vs. 18.3%). In 1981, Feeley et al. [12] studied 293 anesthetized patients, a group with a filter circuit in the inspiratory limb and one without filters, and no differences in the cumulative incidence of ventilator-associated pneumonia between the two groups (2.2% vs. 2.5%) was found. In one study carried out by our team, 230 critically ill patients were randomized to receive mechanical ventilation with and without respiratory filters. We did not find significant differences between patients with and without respiratory filters in the percentage of patients who developed VAP (24.56% vs. 21.55%), in the incidence of VAP per 1000 days of mechanical ventilation (17.41 vs. 16.26 without BF) or in the incidence of exogenous VAP per 1000 days of mechanical ventilation (2.40 vs. 1.74) [13].

20.11 Recommendations of the International Guidelines for the Use of Antimicrobial Filters in Respiratory Circuits

In the guidelines of the Centers for Disease Control and Prevention (CDC) for the prevention of VAP published in 2004 [14], no recommendation was made for or against the use of respiratory filters in breathing circuits of respirators, either with hot water humidifiers or with heat and moisture exchangers, or in breathing circuits of anesthesia machines, because there is insufficient evidence or consensus on their effectiveness.

The guidelines of the Canadian Critical Care Society published in 2008 did not recommend using respiratory filters [15].

The guidelines of British Society for Antimicrobial Chemotherapy published in 2008 recommended the use of expiratory filters for patients suffering from highly communicable infections (e.g., human coronavirus) and who require mechanical ventilation to reduce the contamination of ventilator circuits (although they do not reduce the VAP risk) [16].

In the guidelines published in 2008 by the Society for Healthcare Epidemiology of America/Infectious Diseases Society of America (SHEA/IDSA) [17] and in those published by two different European working groups in 2009 [18] and 2010 [19], there were no reviews of the issue of preventing VAP.

The CDC guidelines for preventing the transmission of Mycobacterium tuberculosis recommend the use of respiratory filters in patients with suspected or confirmed bacillary pulmonary tuberculosis undergoing mechanical ventilation [20].

Outbreaks of VAP were associated with the contamination of anesthesia machines from 1952 to 1972; however, none of the reports presented a bacteriological demonstration of a cause-and-effect relationship.

Bacterial filters have been interposed in respiratory circuits to avoid VAP caused by contamination of ventilators and anesthesia machines.

The use of respiratory filters has not decreased the incidence of VAP in patients using anesthesia machines and in critically ill patients.

The use of respiratory filters is not routinely necessary; however, they should be used in patients with suspected or confirmed highly communicable respiratory infections (such as bacillary pulmonary tuberculosis) and who require mechanical ventilation.