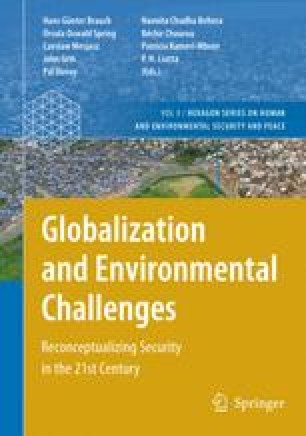 The debate over the linkages between security and environment has evolved since its high profile articulation as a factor in the case for sustainable development in the World Commission on Environment and Development in the 1980’s (WCED 1987). Sceptics and advocates have tangled repeatedly on conceptual, methodological, and political grounds while simultaneously the context for the discussion has evolved both as geopolitical events occurred and as science, and particularly research on climate change, has progressed (Brauch 2002, 2003). This chapter focuses on the innovations in thinking in the early years of the 21st century, suggesting that the linkages between security and environment are now understood in a number of ways, all of which show that matters are much more complicated than early assumptions in the 1980’s about scarcity leading to violence (Hagmann 2005).

Ecological Footprint Global Environmental Change Resource Extraction Environmental Security Human Security
These keywords were added by machine and not by the authors. This process is experimental and the keywords may be updated as the learning algorithm improves.
This is a preview of subscription content, log in to check access.