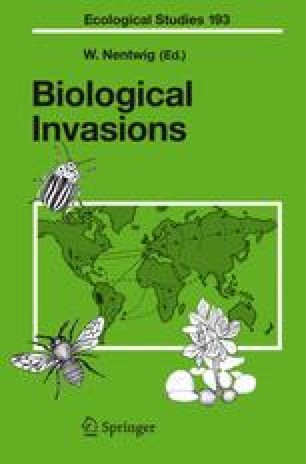 Plant,Animal, and Microbe Invasive Species in the United States and World

Approximately 50,000 plant, animal, and microbe invasive species are present in the United States, and an estimated 500,000 plant, animal, and microbe invasive species have invaded other nations of the world. Immediately, it should be pointed out that the US and world agriculture depend on introduced food crops and livestock.Approximately 99 % of all crops and livestock in all nations are intentionally introduced plants, animals, and microbes (Pimentel 2002). Worldwide, the value of agriculture (including beneficial non-indigenous species) is estimated to total $ 30 trillion per year. Other exotic species have been introduced for landscape restoration, biological pest control, sport, and food processing, also contributing significant benefits.

Calculating the negative economic impacts associated with the invasion of exotic species is difficult.For a few species, there are sufficient data to estimate some impacts on agriculture, forestry, fisheries, public health, and the natural ecosystem in the US and worldwide. In this article, we estimate the magnitude of the economic benefits, and environmental and economic costs associated with a variety of invasive species that exist in the United States and elsewhere in the world.

Exotic Species Zebra Mussel Alien Plant Cane Toad Living Resource
These keywords were added by machine and not by the authors. This process is experimental and the keywords may be updated as the learning algorithm improves.
Download to read the full chapter text