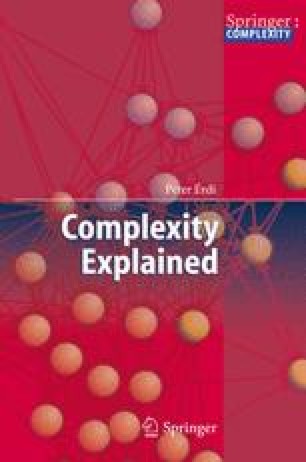 The Dynamic World View in Action

The dynamical system is a mathematical concept motivated first by Newtonian mechanics. The state of the system is generally denoted by a point in an appropriately defined geometrical space. A dynamical system operates in time. Typically, we take the time set T to be the real line R (a continuous-time system) or the set of integers Z (a discrete-time system). We then formalize an autonomous system as a ordered pair (Q, g), where Q is the state space, and g : T × Q → Q is a function that assigns to each initial state x0 ∈ Q the state x = g(t, x0), in which the system will be after a time interval t if it started in state x0. A fundamental property of g, then, is the validity of the identity g(t + s, x0) ≡ g(s, g(t, x0)) (4.1) for all states x, and times t, s. Loosely speaking g is a fixed rule which governs the motion of the system.

Genetic Network Spiral Wave Severe Acute Respiratory Syndrome Turing Instability Replicator Equation
These keywords were added by machine and not by the authors. This process is experimental and the keywords may be updated as the learning algorithm improves.
Download to read the full chapter text

Cite this chapter as:
(2008) The Dynamic World View in Action. In: Complexity Explained. Springer, Berlin, Heidelberg