Pluralisms in Truth and Logic 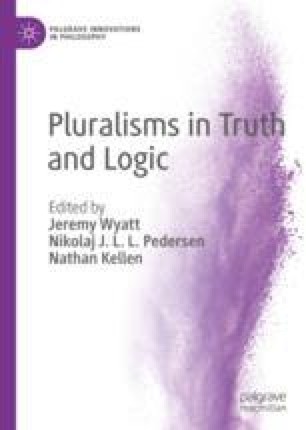 Alethic pluralism is the view that there are different ways of being true. Propositions about riverbanks might be true because they correspond with reality whereas propositions about the law might be true because they cohere with the body of law. According to strong alethic pluralists there is no such thing as truthassuch, that is, no single truth property applicable across all truthapt domains of discourse. Truth is many, not one. Moderate alethic pluralists, on the other hand, endorse a generic truth property applicable across all truthapt discourse. However, propositions belonging to different domains may possess this generic truth property in virtue of having distinct properties such as correspondence or coherence. Truth is both one and many. This chapter has two aims. The first aim is to present and develop a version of strong alethic pluralism in some detail. This task has been somewhat neglected in the literature, as strong pluralism is widely regarded as a nonstarter due to a battery of seemingly devastating objections. The problem of mixed compounds has been regarded as being particularly pressing—and difficult—for the strong pluralist to deal with. The second aim of the chapter, then, is to give a strongly pluralist response to the problem of mixed compounds