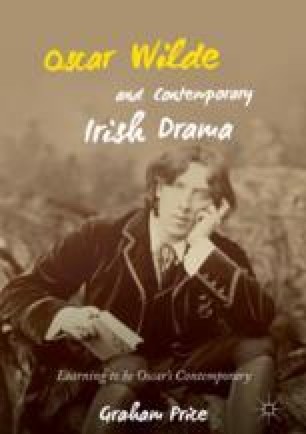 Epilogue: Being Wild(ean) in the Twenty-First Century

This study has examined the importance of Oscar Wilde’s life, literature, and aesthetic theories to contemporary Irish drama from the twentieth to the beginning of the twenty-first century by focusing on arguably the five most preeminent and representative dramatists of contemporary Ireland. The epilogue shall focus on two playwrights who represent the continuing influence of Wilde upon Irish drama: Martin McDonagh and Mark O’Halloran. The work of these writers may not have proven, thus far, to be as influential as the five playwrights who have had chapter-length studies devoted to them in this book, but they are important Irish dramatists who have contributed to Wilde’s legacy in contemporary Irish drama. Regardless, the quality of their dramas and their definite engagement with the legacy of Wilde’s life and works certainly make them deserving of a shorter examination in this study. McDonagh’s drama, because of its tendency towards repetition of character traits, themes, and dramatic style, means that it does not need as extensive an examination in this study as playwrights whose usage of the Wildean legacy can be regarded as being more multi-faceted. It is certainly the case, however, that a study of Wilde and contemporary Irish drama does need to reckon with and examine the strand of Wildeanism that exists in the dramatic trilogies of McDonagh and his most contemplative and artistically aware play, The Pillowman. Mark O’Halloran’s play Trade (2011) shall be considered as a drama which also encapsulates, via its depiction of the love between an older and a younger man’s usage of several Wildean themes and theatrical devices, the importance that Wilde’s various texts and status as an LBTQ icon still hold for the artistic and cultural zeitgeist in twenty-first-century Ireland.

Cite this chapter as:
Price G. (2018) Epilogue: Being Wild(ean) in the Twenty-First Century. In: Oscar Wilde and Contemporary Irish Drama. Palgrave Macmillan, Cham