Clinical Manual of Fever in Children 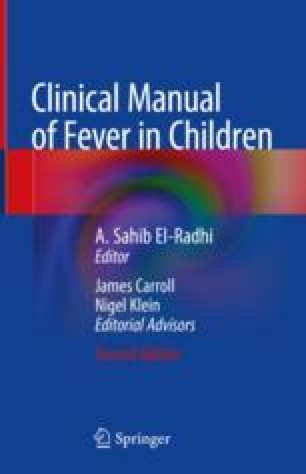 Clinical Manual of Fever in Children pp 53-68 | Cite as

The generation of fever involves the following steps: numerous substances from outside the body, exogenous pyrogens, initiate the fever cycle. Endotoxin of Gram-negative bacteria, with their pyrogenic component lipopolysaccaride, is the most potent exogenous pyrogen. Fever is also a common finding in children without obvious evidence of infection, for example hypersensitivity reaction, autoimmune diseases and malignancy.

Exogenous pyrogens initiate fever by inducing host cells (primarily macrophages) to produce and release endogenous pyrogens such as interleukin-1, which has multiple biological functions essential for the immune response. Endogenous pyrogens are transmitted to the hypothalamic thermoregulatory centre, specifically organum vasculosum of the lamina terminalis (OVLT), where they induce synthesis of prostaglandins, of which PGE2 is the most important. These raise the thermostatic set point to initiate the febrile response.

The hypothalamic thermoregulatory centre accomplishes heat production by inducing shivering and heat conservation through vasoconstriction. At an established degree, fever is regulated (even at a temperature of over 41.0 °C) and heat production approximates loss, as in health, though at a higher level of the set point. Therefore fever does not climb up relentlessly.

In addition to the function as an endogenous pyrogen, IL-1 activates T-lymphocytes to produce various factors, such as INF and IL-2, which are vital for immune response. The production of fever simultaneously with lymphocyte activation constitutes the clearest and strongest evidence in favour of the protective role of fever.

The induction of fever results in inhibition of bacterial growth, increased bactericidal effects of neutrophils, production of acute-phase protein synthesis and other physiological changes such as anorexia and somnolence. These changes suggest that fever has an adaptive role in the host’s survival during infection.

Research in fever has been centred on the hypothesis that fever results from physiological processes that are set in motion by an external stimulus. Egyptian scholars recognized that local inflammation was responsible for fever. In 1868, Billroth (1829–1894) attempted to confirm this ancient observation by injecting pus into animals, thereby producing a febrile response. In 1943, Menkin carried out similar experiments and isolated a product termed “pyrexin” [1]. Beeson in 1948 isolated a fever-inducing substance from a leukocyte, leukocyte pyrogens, which later became known as endogenous pyrogen (EP). Interleukin-1 (IL-1) was first identified as a cytokine by Gery and Waksman and proved to be identical with EP [2].

Exogenous pyrogens (e.g. bacteria, viruses, toxins) initiate fever, usually within 2 h of exposure, by interacting with macrophages or monocytes, leading to cytokine induction. Other mechanisms to initiate fever include:

Mononuclear cells are leukocytes (3–8% of the leukocytes) and are largely responsible for the production of IL-1 and fever induction. Polymorphonuclear granulocytes are no longer thought to be responsible for IL-1 production because fever may occur in their absence, e.g. agranulocytosis. The mononuclear cells are either circulating monocytes in the peripheral blood or tissue macrophages (histocytes) scattered in organs such as lung (alveolar macrophages), lymph nodes, placenta, peritoneal cavity and the subcutaneous tissue. The origin of both monocytes and macrophages is the granulocyte-monocyte colony-forming unit (GM-CFU) in the bone marrow. Monocytes enter the circulation either to remain there for a few days as circulating monocytes or to migrate to the tissue where they undergo functional and morphological transformation into macrophages, when their life span is several months. These cells play an important role in:

IL-1 consists of three structurally related polypeptide, two agonists (IL-1α and IL-1β) and an antagonist (IL-1 receptor antagonist = IL-1ra), which inhibit the activities of the two powerful agonists. Anakinra is a naturally IL-1ra. IL-1α is produced in:

IL-1β is not present in cells of healthy people and is mainly produced by monocytes, macrophages and dendritic cells.

Interleukin-1 has important roles in the following conditions (Fig. 3.3):

TNF-α, discovered in 1975, is a pro-inflammatory cytokine produced by immune cells, e.g. monocytes and macrophages (TNF-α), lymphocytes (TNF-β), natural killer cells, Kupffer cells, astrocytes and microglia of the CNS, in response to invasive or injurious insults. TNF-α is an endogenous pyrogen acting on the hypothalamus to induce fever. Unlike IL-1, TNF has no direct effect on stem cell and lymphocyte activation. TNF-α has diverse beneficial biological effects, including:

The initial enthusiasm to use TNF-α as a systemic antitumour treatment has waned because of its significant toxicity and lack of therapeutical benefit. However, TNF-α blockers (monoclonal antibodies, infliximab, adalimumab and etanercept) have altered the outcomes for children with inflammatory bowel disease, such as Crohn’s disease and ulcerative colitis and rheumatoid arthritis. According to a systematic review of literature [7], the treatment has resulted in a variety of infections in the treated children including bacterial, fungal, viral and TB. Few children died.

The antigen-specific cells of the immune system are lymphocytes, of which there are two main types:

IL-1 has an essential role in the activation of lymphocytes. The T-lymphocyte recognizes antigen only after the antigens are processed and presented to them by macrophages; only then do T-lymphocytes become active.

Interferons are known for their ability to “interfere” (hence the name) with viral replication in infected cells. In addition, these cytokines have pyrogenic effect, antitumour and immuno-regulatory functions. There are three types, type 1 (IFN-α, IFN-β), type II (IFN–γ) and type III (IFN-λ). Only type I is used as therapy. Type I and III are produced by a variety of cells (such as leukocytes, dendritic cells, fibroblasts and macrophages), whereas synthesis of type II is restricted to T-lymphocytes.

The functions of the interferons include:
Type I INF is used as a treatment for a variety of diseases, including:

Toxic effects of INF preparations are numerous and include fever, chills, arthralgia, myalgia, severe headaches, somnolence and vomiting. Fever may occur in over 50% of the patients who receive INF and may reach 40.0 °C. These side-effects are responsive to paracetamol and prednisolone. Severe side-effects include hepatic and cardiac failure, neuropathy and pancytopenia. INF therapy is contraindicated in pregnancy owing to its anti-proliferative effect.

IL-2 is probably the second most important lymphokine (after INF), which is released by activated T-lymphocytes (in particular CD4+ and CD8+) in response to exogenous pyrogen. It has a crucial effect on the growth and function of T cells, natural killer cells and B cells and for the development of CD4+ T cells. Cases of severe congenital combined immunodeficiency due to a specific defect in the production of IL-2 have been reported. Effects of IL-2 include:

IL-6 is the third most studied cytokines that has the following characteristics:
Other cytokines with their main effects are shown in Table 3.1.
Table 3.1

Main lymphokines produced by T cells and their main effect/use

The administration of GM-CSF may be associated with the development of fever, which is blocked by non-steroidal anti-inflammatory drugs such as ibuprofen.

In response to a rise in body temperature above 37 °C (or ambient temperature above 30–31 °C), heat is lost from the body via the four physical modalities: evaporation, radiation, convection and conduction. When the body core temperature rises (e.g. fever), heat loss through evaporation (causing sweating) becomes the primary mechanism of heat loss. This is associated with cutaneous vasodilatation via acetylcholine-mediated relaxation of the vascular smooth muscles. The following are the mechanisms by which heat loss occurs at rest:

In a warm environment or when core temperature is elevated, the hypothalamic thermoregulatory centre activates efferent fibres of the automatic nervous system to produce vasodilatation. The increased blood flow to the skin causes heat loss from the core through the skin surface to the surroundings in the form of sweating. The hypothalamus stimulates vasodilatation to increase insensible loss (for every 1 °C elevation of body temperature, there is a 10% insensible loss) and activates the sweat glands to increase perspiration production.

Physical factors obviously affect the ability to respond to temperature changes. The greater heat loss in the newborn infant is mainly due to a greater surface area compared to that of an older child. Failure of heat loss occurs in anhidrotic ectodermal dysplasia and during anticholinergic drug overdose.

3.7.3 Temperature Regulation at the CNS Level

In the classical model of pathogenesis, fever induction includes the following stages:

The generation of fever involves the following steps:

Cite this chapter as:
El-Radhi A.S. (2018) Pathogenesis of Fever. In: El-Radhi A. (eds) Clinical Manual of Fever in Children. Springer, Cham