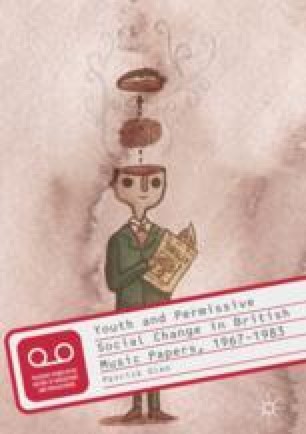 Too Much Paranoias: The Beginning of the End for the Inkies

This chapter analyses the music press from 1979 to 1983, the last time the NME and Sounds had significant increases in circulation while Melody Maker had begun its slow decline. It evaluates why music papers, particularly the NME, had to a large extent abandoned the idea that popular music can engender profound social change. It considers how some journalists explored themes of alienation shaped, to some extent, by the lived experience of social problems and urban blight. This again gave the opportunity to question how permissiveness had changed society. The chapter then demonstrates how conversations in music papers became more esoteric, pointed and angry; Sounds, for instance, was embroiled in the aftermath of a race riot and accused of encouraging racist skinheads.

Cite this chapter as:
Glen P. (2019) Too Much Paranoias: The Beginning of the End for the Inkies. In: Youth and Permissive Social Change in British Music Papers, 1967–1983. Palgrave Studies in the History of Subcultures and Popular Music. Palgrave Macmillan, Cham