Exercise and Sporting Activity During Pregnancy 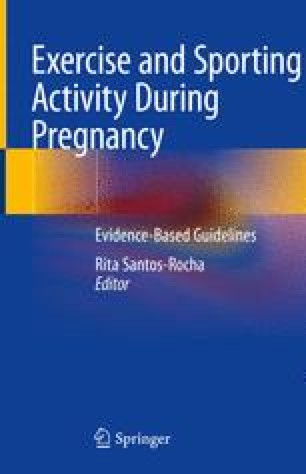 Exercise and Sporting Activity During Pregnancy pp 231-308 | Cite as

Exercise Selection and Adaptations During Pregnancy

There are several guidelines supporting the benefits of exercising during pregnancy. Those documents contain very general recommendations on physical activity and exercise during pregnancy, such as general guidelines for health screening and exercise prescription of aerobic exercise and strength training. They also include examples of safe physical activities during pregnancy, such as walking, running, swimming, stationary cycling, low-impact aerobics, modified yoga, and Pilates. However, those guidelines contain little information that exercise professionals could use when programming the contents of targeted exercise classes for pregnant women. This chapter addresses the steps for planning, conducting, and monitoring prenatal exercise classes and explains how to select and adapt the exercises regarding the suggested safe physical activities during pregnancy.

Technique considerations: Head up, shoulders down and back, chest up, abdominals lightly contracted, and buttocks gently tucked under the hips. Knees and back should never hyperextend at any time. When stepping up the body should lean from the ankles. The entire sole of the foot should contact the bench, stepping softly and quietly to avoid unnecessary high impacts. When hopping or jumping, softly contact the bench or the floor. The heel should not land over the edge of the bench to avoid Achilles tendon injury. When “touching” the bench, the toes should be used. During knee lift, leg curl, and leg abduction, avoid hyperextending the other knee and the back. When stepping down, the step should be close to the bench (no more than one shoe length away), and the heel should contact the floor. Keep a comfortable distance between the body and the bench (neither too close nor too far).

Suggestions for Exercises in the Presence of Diastasis Recti Abdominis

The following exercises are recommended for both pregnant and postpartum women with the separation of abdominal muscles.