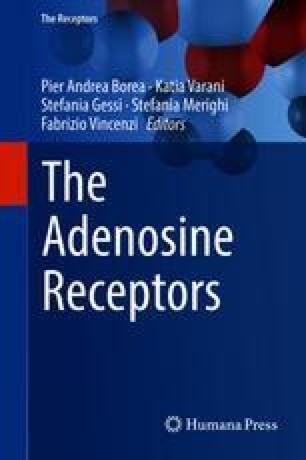 Adenosine Receptors in the Lungs

Chapter
Part of the The Receptors book series (REC, volume 34)

The ubiquitous adenine nucleoside adenosine (Ado), which plays an important role in cellular energetics, is released from cells under physiologic and pathophysiologic conditions. Another source of extracellular Ado is rapid degradation of extracellular adenosine 5′-triphosphate (ATP) by ectoenzymes. Extracellular Ado acts as an autocrine and paracrine agent by the activation of G protein-coupled cell surface receptors (GPCRs), designated as A1, A2A, A2B, and A3. Almost four decades ago, published data have indicated that Ado could play a role in immune-mediated histamine release from pulmonary mast cells. Since then, numerous studies have indicated that Ado’s signal transductions are involved in various pulmonary pathologies including asthma and COPD. This chapter is a succinct review of recent studies in this field.

The ubiquitous adenine nucleoside adenosine (Ado) plays a major role in cellular metabolism and energetics. The levels of extracellular Ado are determined by its release from cells under physiologic and pathophysiologic conditions as well as the degradation of extracellular adenosine 5′-triphosphate (ATP) by ectoenzymes, CD39 and CD73 in particular (Zimmermann 2000; Zimmermann et al. 2012). Extracellular Ado is eliminated from the extracellular space by ecto-adenosine deaminase (ADA) (Franco et al. 1997) and active Ado transporters that transport Ado into cells (Thorn and Jarvis 1996). Extracellular Ado acts as an autocrine and paracrine agent, the effects of which are mediated by four different G protein-coupled receptors: A1, A2a, A2b, and A3 (A1AdoR, A2aAdoR, A2bAdoR, and A3AdoR, respectively). These receptors, which are expressed to various degrees by different cell types throughout the body including the lungs (Burnstock et al. 2012; Zhou et al. 2009), manifest variable affinity to Ado (Fredholm et al. 2001). AdoR are coupled to cascades of intracellular cellular-response pathways, mainly through the activation or inhibition of adenylate cyclase and the subsequent alteration of intracellular cyclic adenosine monophosphate (cAMP) levels (Karmouty-Quintana et al. 2013). The activation of AdoR can lead to both pro-inflammatory and anti-inflammatory effects, depending on the type of receptor and the experimental setting (Schepp and Reutershan 2008).

This chapter is a succinct review of recent studies in this field. The large number of relevant publications and the limited scope of this review inevitably impose selective articles’ citation. We thus apologize if our selection of articles does not include article(s) that others may feel should have been cited.

A1AdoR , which has the highest affinity to Ado, is expressed at low levels in the lung; relatively higher levels were detected in the newborn mice (Metsola et al. 2014). The activation of A1AdoR reduces adenylate cyclase’s activity via the activation of pertussis toxin-sensitive Gi and Go proteins, stimulates phospholipase C via Gβγ subunits, and activates pertussis toxin-sensitive K+ channels (Pelleg et al. 1996) and KATP channels (Schepp and Reutershan 2008). Activation of the A1AdoR could be pro- or anti-inflammatory depending on the specific pathophysiologic conditions and the levels of extracellular Ado.

Early studies have shown that ischemia-induced constriction of the pulmonary vasculature is mediated by the activation of A1AdoR, which results in thromboxane release (Neely et al. 1991) as well as pulmonary ischemia-reperfusion injury (Neely and Keith 1995). Subsequent in vivo studies using a mouse model have shown that physiologic doses of Ado decrease alveolar fluid clearance (AFC), probably by means of an A1AdoR-dependent mechanism that causes Cl− efflux through CFTR, whereas lower doses increased AFC via the A2aR and/or A3R (Factor et al. 2007). Similarly, alcohol decreases alveolar fluid clearance and impairs survival from acute lung injury. Alcohol induced increases Ado levels in the lung, which may be responsible for reduction in AFC and associated worsening of lung injury (Dada et al. 2012).

The expression of A1AdoR in the airways of asthmatic subjects is upregulated (Wilson et al. 2009). Ado-induced bronchoconstriction in human subjects is indirect (see above); however, in rodents this action is mediated by A1AdoR and a central vagal reflex (Wilson et al. 2009). Although A1AdoR activation affects “different cell types to produce bronchoconstriction, inflammation, mucous gland hyperplasia, angiogenesis, and fibrosis, all of which are important in the pathophysiology of human asthma” (Wilson et al. 2009), the exact role of Ado and A1AdoR in asthma has not been fully delineated, and accordingly none of the drug candidates targeting A1AdoR signal transduction has been approved by the FDA (see, e.g., Gottlieb et al. 2011).

Adenosine activation of leukocyte A1AdoR plays a significant role in their recruitment to lungs infected with an influenza virus and thereby contributes to influenza pathogenesis (Aeffner et al. 2014).

A2AAdoR is expressed by various inflammatory cell types, and its activation results in broad anti-inflammatory effects (Hasko and Pacher 2008). A2AAdoR signaling attenuates acute lung injury by enhancing alveolar fluid clearance in mice (Eckle et al. 2008). The expression of A2AAdoR was decreased significantly by an allergen challenge in a mouse model of asthma suggesting that A2AAdoR deficiency leads to airway inflammation and airway hyperresponsiveness in this setting (Nadeem et al. 2007).

In contrast, it was recently shown that the activation of A2AAdoR modulated the activation of fresh human alveolar inflammatory cells in patients with interstitial lung disease (Alfaro et al. 2017). A2AAdoR plays a role in the regulation of different stages of immune responses, including antigen presentation, T-cell activation, expansion, survival, and memory (Ohta and Sitkovsky 2001). Specifically, Ado suppresses the immune response by activation of A2AAdoR expressed by T-cells. Indeed, a selective antagonist of A2AAdoR reduced the tumor burden in a mouse lung cancer in vivo model and restored immune responsiveness ex vivo (Mediavilla-Varela et al. 2017).

Chronic lung inflammation is associated with fibroblasts proliferation, beginning to proliferate, the formation of new blood vessels, and the increase in extracellular matrix resulting in the development of pulmonary fibrosis (Della Latta et al. 2013). Genetic knockout of A2AAdoR in mice significantly exacerbates, while activation of A2AAdoR attenuates the progression of pulmonary fibrosis induced by bleomycin (a chemotherapeutic agent used to treat several neoplastic diseases and widely used ones for the induction of lung fibrosis (Della Latta et al. 2015; Chen et al. 2017). The beneficial effects of A2AAdoR activation in this setting are mediated at least partially via the stromal cell-derived factor-1 (SDF-1)/C-X-C chemokine receptor type 4 (CXCR4) pathway, the inhibition of which protects the lungs from fibrogenesis in BLM-exposed mice (Chen et al. 2017).

A2BAdoR was found to play an important role in mediating lung inflammation after an ischemia-reperfusion challenge by stimulating cytokine production and neutrophil chemotaxis in a mouse model in vivo (Anvari et al. 2010). In contrast, several studies have shown that Ado and A2BAdoR play an important role in the resolution of pulmonary edema and inflammation during ALI (Eckle et al. 2009). For example, in a mouse model of ALI (intratracheal LPS treatment followed by injurious mechanical ventilation), it was found that alveolar epithelial A2bAdoR signaling contributes to lung protection (Hoegl et al. 2015).

Stromal cell-derived factor (SDF)-1 is a chemokine that regulates the release of neutrophils from the bone marrow into the circulation; during inflammation, the concentration of SDF-1 in the bone marrow decreases, and polymorphonuclear neutrophils enter the circulation from where they can migrate to the lungs during ALI (Konrad et al. 2017). SDF-1 is expressed in the human lung during acute lung injury (Petty et al. 2007). The effects of SDF-1 are mediated by two receptors: CXCR4 and CXCR7 (Rath et al. 2014), the inhibition of which results in an anti-inflammatory effect during ALI (Konrad et al. 2017). Using a mouse model of ALI and an in vitro preparation of human epithelium/endothelium, it was found that the anti-inflammatory effects of CXCR4 and CXCR7 antagonism in terms of PMN migration, chemokine release, and microvascular permeability are linked to adenosine A2BAdoR signaling in hematopoietic cells (Konrad et al. 2017).

Previous studies have shown that extracellular purine nucleosides and nucleotides are potent modulators of human lung mast cell (HLMC) degranulation and histamine release (Pelleg and Schulman 2002; Polosa et al. 1995). Low and high concentrations of Ado enhanced and suppressed, respectively, the release of histamine from FcεRI-stimulated HLMC; this action was mediated by A3AdoR (Gomez et al. 2011). The dose-dependent contrasting effects of Ado on histamine release associated with an allergic reaction were confirmed in a subsequent study using cultured HLMC (Nishi et al. 2016). Rudich et al. examined whether the activation of A3AdoR modulates rather than mediates the effects of Ado in human mast cells, presumably at a transcriptional level (Rudich et al. 2015). Using the HMC-1 cell line, Rudich et al. found that A3AdoR activation represses the expression of genes involved in tissue remodeling and that is coupled to downregulation of the receptor expression, both at protein and mRNA levels (Rudich et al. 2015). Furthermore, since in this study, dexamethasone, a commonly prescribed asthma medication, exerted a synergistic signal that increased Cl-IB-MECA induced gene upregulation and facilitated cytokine secretion, it was speculated that this interaction might underlie the resistance to corticosteroids that is experienced in severe refractory asthma (Rudich et al. 2015).

Although the prevailing school of thought is that the production of Ado and its activation of AdoR play largely beneficial roles in acute pathophysiologic condition and sustained elevated Ado levels can become detrimental by activating pathways that promote tissue injury and fibrosis (Karmouty-Quintana et al. 2013), many studies challenge this concept. Specifically, it seems that even in the acute phase of injury, the resulting effects of elevated extracellular Ado levels critically depend on the targeted cell type and the localized Ado level at the receptors’ sites. This could explain why, until now, neither selective agonists nor antagonists of AdoR subtypes have been approved by the FDA for the treatment of either acute or chronic lung injury and inflammation (Borea et al. 2016).