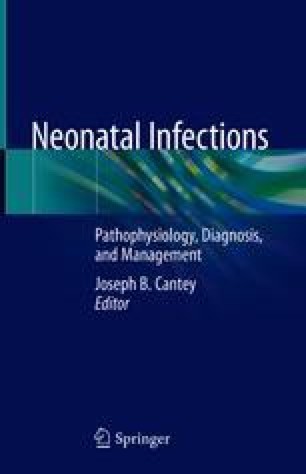 Respiratory viral infections (RVIs) pose a unique challenge for clinicians in the neonatal intensive care unit (NICU) due to preterm infants’ increased susceptibility to infections (Maitre NL and Williams JV, Res Rep Neonatol. 6:41–49, 2016). RVIs often present with nonspecific symptoms and currently lack effective treatments (Baraldi et al., Ital J Pediatr. 40:65, 2014). Death due to viral bronchiolitis is a major cause of morbidity and mortality in developing nations and industrialized nations alike, and patients with bronchiolitis frequently require intensive care and use of mechanical ventilation (Thompson et al., JAMA 289:179–186, 2003). Infants who acquire RVI during their birth hospitalizations have significantly longer length of stay and are more likely to develop chronic respiratory disease, particularly bronchopulmonary dysplasia (Bennett et al., J Pediatr 161:814–818, 2012). Furthermore, infants with RVIs are often placed on empiric antibiotic therapy, which can frustrate antimicrobial stewardship efforts (Bennett et al., J Pediatr 161:814–818, 2012; Cantey et al., Lancet Infect Dis 2016;16:1178–1184). RVIs are also associated with increased costs to both health systems and families due to increased care and lost productivity. In 2016, Zinna et al. (Pediatrics 138:e20161675, 2016) showed that infants with hospital-acquired RVI in the United Kingdom had hospital charges more than double those of uninfected infants. Similarly, the Sentinel-1 Study (Anderson et al., Am J Perinatol 34:51–61, 2017) in the United States demonstrated that each hospitalization for respiratory syncytial virus (RSV), the most common etiological agent of viral bronchiolitis in children age <1 year, costs more than $55,000, even excluding the additional outpatient visits before and after hospitalization. The goal of this chapter is to address the epidemiology, pathogenesis, diagnosis, treatment, and prevention of respiratory viruses in the highly vulnerable patient population in the NICU.

The “usual suspects” causing RVI are well-known and include the following pathogens: human rhinovirus, influenza A and B, adenovirus, human metapneumovirus, parainfluenza, coronavirus, and—most importantly—RSV [1, 2]. In countries with temperate climates, such as the United States and Western Europe, late autumn until spring represents the “epidemic season” in which patients are most likely to acquire an RVI [1]. The introduction of reliable and fast polymerase chain reaction (PCR) assays in the recent years has allowed for rapid detection of viruses in the NICU, which has in turn challenged the previously held assumption that infants within NICUs are protected from community pathogens [3]. These findings highlight the importance of hand hygiene and other preventive strategies during the epidemic season.

The clinical presentation of patients with RVI—typically rhinorrhea, cough, cackles, wheezing, retractions, or respiratory distress—can prompt diagnoses of “culture-negative sepsis” and initiation of antibiotic therapy [1, 2]. Prospective studies in which respiratory viral testing has been performed during late-onset sepsis evaluations demonstrate that 5–10% of suspected late-onset sepsis is actually due to RVI infection [2, 4, 5]. These findings support the use RVI screening by PCR when sepsis is suspected to bolster antimicrobial stewardship efforts in the NICU.

While the exact cause of preterm infants’ increased susceptibility to RVI remains unknown, the current literature points to a combination of inflammatory conditions, both in utero and after birth, immaturity and dysfunction of the immune system, and genetic and epigenetic factors [6, 7]. RVI in the first year of life has been associated with recurrent respiratory morbidity, including asthma and wheezing, though it remains to be determined if respiratory viruses cause these morbidities or exacerbate an underlying genetic predisposition in these children [1].

RSV , in particular, has been strongly associated with the development of respiratory sequelae, though rhinovirus and human metapneumovirus have been implicated as well [1, 8]. For patients with RSV infection, the normal immune response follows a three-step pattern: the innate epithelial response at the nasal mucosa, the antibody response (specifically, IgG) at the upper airway for protection against infection of the lower respiratory tract, and the T cell response, which is responsible for viral clearance [1, 6]. Preterm neonates have deficient immune responses to some pathogens and overly aggressive, unregulated responses to others [1, 6, 8].

Along with preterm infants, those with congenital heart disease, Down syndrome, congenital neuromuscular diseases, cystic fibrosis, or congenital immunological deficiencies are at particularly high risk for severe RVI, particularly RSV [1]. In infants with congenital heart disease, RSV infection of the lower respiratory tract may cause a variety of potentially fatal complications including sinoatrial block, tachyarrhythmias, atrioventricular block of varying entity, pericarditis, and myocarditis [1, 9]. The importance of palivizumab prophylaxis in this population has been well documented (see chapter “Immunizations in the Nursery”) [10, 11]. Similarly, children with Down syndrome are considered to be high risk for severe RSV infection due to the underlying heart disease that frequently accompanies the condition [1]. Infants with congenital neuromuscular disease are also at high risk from RVI due to reduced vital capacity in the lungs, weak cough and dysphagia inhibiting clearance of respiratory excretions, compromised ability to comply with physiotherapeutic interventions, and recurrent aspiration due to gastroesophageal reflux disease or vomiting due to coughing [12].

Preterm infants with cystic fibrosis are also at risk of accelerated decline in respiratory function over the course of their lives due to RSV infection. These patients are extremely susceptible to recurrent wheezing and bacterial superinfections, most commonly Pseudomonas aeruginosa , secondary to RSV infection. RSV is a known facilitator of Pseudomonas aeruginosa infection and proliferation in this population [13, 14]. Finally, patients with severe immunocompromise—either due to transplantation, HIV, DiGeorge syndrome, severe combined immunodeficiency, etc.—have a deficient T cell lymphocyte response, which inhibits viral clearance causing greater virulence and persistently higher viral loads [15, 16, 17].

In general, clinical findings of RVI in the nursery setting have significant overlap between pathogens (Table 1). Signs include upper respiratory (rhinorrhea, cough, stridor) and lower respiratory (tachypnea, desaturations, crackles, wheezing, retractions) findings [23]. For preterm infants, respiratory deterioration or apnea is common. Nonspecific findings (e.g., feeding intolerance, temperature instability) are also seen. New or evolving radiographic changes are sensitive for lower respiratory tract involvement, but in preterm infants, it is difficult to differentiate viral from bacterial pneumonia in the absence of testing. As mentioned above, extrapulmonary findings such as hepatitis or myocarditis in the setting of RVI are particularly concerning for adenoviral infection or severe RSV disease.
Table 1

The diagnosis of RVI in the NICU occurs in two distinct phases: the clinical diagnosis and the etiological diagnosis [1]. The clinical diagnosis should be derived from physical examination and the medical history. Infants with RVI who present with nonspecific findings such as temperature instability, apnea, or respiratory deterioration may be difficult to differentiate from infants with late-onset sepsis (see chapter “Late-Onset Sepsis”). Viral testing can differentiate RVI from bacterial infection. When RVI is suspected, determining the etiology is still useful as it may assist antimicrobial stewardship efforts, identify ongoing horizontal transmission within the unit, and identify infants who could benefit from antiviral therapy (i.e., those with influenza).

Serologic testing or viral culture is rarely used any longer to diagnose RVI. Instead, the nasopharynx or, rarely, bronchoscopy fluid can be directly tested for viral material:

Rapid antigen detection tests collected by nasal lavage or swab offer results in ≤60 min with 80–90% sensitivity, though false negatives have been reported in children aged less than 3 months.

Polymerase chain reaction is the gold standard test for respiratory viruses, offering 93–100% sensitivity and 64–100% specificity [1]. The BioFire® FilmArray respiratory panel (Salt Lake City, Utah, USA) currently allows for testing of up to 17 respiratory viruses and 3 bacteria from a single sample. Rogers et al. [24] found that implementation of rapid respiratory panel testing significantly reduced the duration of antibiotic use, the length of inpatient stay, and the patient’s time in isolation. These findings support the use of PCR testing when indicated and where available.

With the exception of oseltamivir for influenza infection, there are no specific antiviral therapies available for treatment of RVI in infants. Treatment is instead limited to supportive care with supplemental oxygen and intravenous hydration [1, 6]. Nebulized 3% hypertonic saline has also shown to be a safe and effective respiratory support. There is insufficient evidence for the efficacy of bronchodilators, steroids, antibiotics, or respiratory physical therapy in the treatment of bronchiolitis, and international guidelines for bronchiolitis treatment remain limited to supplemental oxygen and intravenous fluids [1].

For influenza, dosing recommendations are available for term and preterm infants. However, safety data is limited for infants younger than 3 months, so treatment should be reserved for high-risk cases such as infants with acute respiratory decompensation or extreme prematurity [25].

Prevention is the best medicine for RVI in preterm infants. In the absence of antiviral therapies or vaccines against most RVIs, environmental prophylaxis is most effective means of prevention. Compliance with hand hygiene protocols and the decontamination of objects and surfaces in the NICU have been shown to be effective in reducing preterm infants’ exposure to RVI [26].) For especially devastating infections such as RSV , additional preventative measures include active surveillance with testing, cohorting infected infants away from those testing negative, use of pathogen-specific precautions (see chapter “Principles of Infection Prevention in the Nursery”), and limiting patient contact with visitors [27, 28, 29, 30]. For eligible patients, palivizumab is a safe and effective means of pharmacological prophylaxis against RSV [31]. In 2014, the American Academy of Pediatrics’ Committee on Infectious Diseases and Bronchiolitis Guidelines Committee issued new recommendations for infants eligible to receive palivizumab prophylaxis (see chapter “Immunizations in the Nursery”).

Finally, recent research has focused on the effects of restrictions on sibling visits to patients in the NICU for the prevention of RVIs. Peluso et al. [32] demonstrated a significant reduction in RSV infections after implementing restrictions on all visitors under the age of 13 years. Similarly, Caserta et al. [33] found that visitor restrictions on children less than 14 years in combination with other hand hygiene protocols were associated with a significantly lower rate of infection than in term infants living in the community and in preterm infants once discharged from the hospital. These findings highlight the need for additional research to develop improved protocols for the prevention of RVI in the NICU.