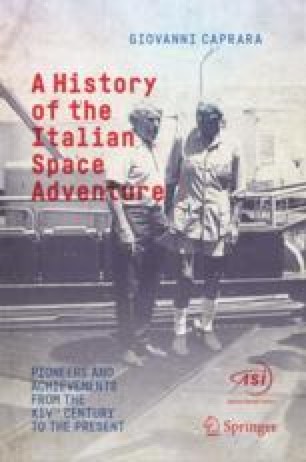 In the early twentieth century, the interest in rockets and space flight emerged above all from science fiction, which had begun to tell fascinating stories. Particularly relevant in contributing to stimulating the imagination was the discovery of the Martian canals by Giovanni Virginio Schiaparelli of the Brera Observatory in Milan. The canals had been interpreted as the work of intelligent beings, particularly by the rich American, Percival Lowell, who had supported and disseminated this thesis through continuous telescopic surveys carried out by an observatory in Arizona, specially financed using his personal resources. However, although illustrious astronomers were called here, only Lowell remained convinced in the existence of Martians, along with an increasing number of people who believed him.

Cite this chapter as:
Caprara G. (2020) Early Twentieth Century Pioneers and Visionaries. In: A History of the Italian Space Adventure. Springer, Cham