Medical Paratexts from Medieval to Modern 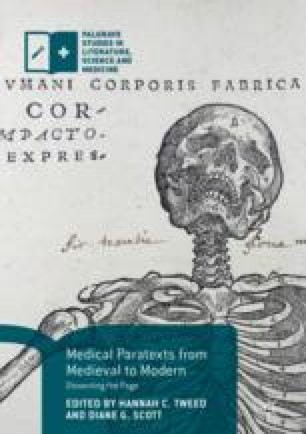 Medical Paratexts from Medieval to Modern pp 43-56 | Cite as

This chapter examines the textual and visual representation of twins in two seventeenth-century midwifery manuals, Jacques Guillemeau’s Child-birth or, the Happie Deliuerie of Women (1612), and Thomas Chamberlayne’s The Compleat Midwife’s Practice (1656). It highlights how the twins of the texts are never shown to engage in physical contact with one another, but those of the medical paratexts are continually portrayed as touching. Through its discussion of this discrepancy, this chapter reveals that there was a seventeenth-century uncertainty as to when the relationship between two people who were born at the same time actually began, and how it would be affected by a parting which was deemed necessary for their survival. It also argues that when an equal weighting is attributed to text and paratext, a richer and more comprehensive reading emerges than when one of them is privileged over the other.