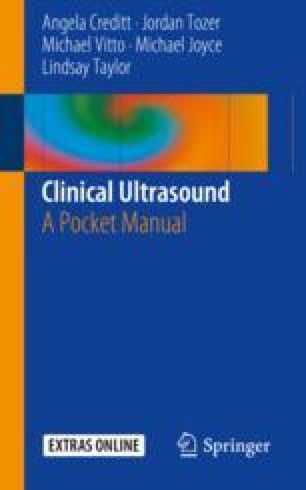 Learning ultrasound can be overwhelming and confusing, especially for those who are becoming familiar with equipment and images for the first time. This chapter will provide an overview of basic point-of-care ultrasound physics and procedure. It will explain ultrasound-specific terminology for image optimization, transducer types including clinical application and positioning, and different scanning modes such as brightness mode, motion mode, and Doppler. Lastly, common ultrasound artifacts, their characteristics, and how to recognize them will be described.

B-mode imaging: Brightness mode (B-mode) imaging is the standard modality of obtaining ultrasound images. It is represented by the conversion of ultrasound waves into grayscale imaging. In this image, the heart is visualized by obtaining a parasternal long view (MP4 2386 kb)

Power Doppler: Power Doppler has a higher sensitivity than color Doppler for detecting flow. Under power Doppler, a color signal will be displayed if there is any motion detected. In this image, the testicle is being examined using power Doppler (MP4 2011 kb)

Gallstone shadowing: Gallstones will exhibit posterior acoustic shadowing artifact which also helps identify and confirm the structure images as a stone rather than a gallbladder polyp, for example (MP4 2135 kb)

Gallbladder with PAE: Posterior acoustic enhancement occurs when sound passes through a fluid-filled structure, such as a gallbladder (imaged here), resulting in structures more posterior to become brighter or more echogenic (MP4 1872 kb)

Liver with mirror artifact: When ultrasound waves hit a highly reflective structure, such as the diaphragm, the machine will interpret the images as coming back twice resulting in mirror artifact (MP4 1594 kb)