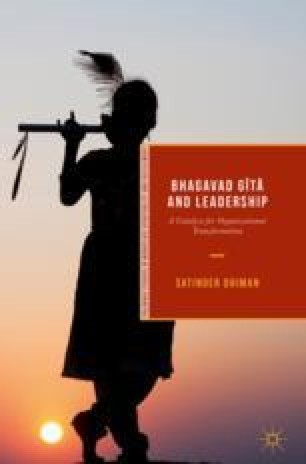 Be the Change: The Making of a Servant Leader

This chapter focuses on the core message of the Gı̄tā, as interpreted by Gandhi and the practical lessons in life and leadership that Gandhi drew from his lifelong study of this timeless spiritual classic. It traces the influence of the Gı̄tā in the fashioning of Gandhi as a servant leader. It demonstrates why the Gı̄tā exercised such a singular hold on Gandhi’s mind and heart. The Gı̄tā was a spiritual reference book for Gandhi. He studied it all his life; he lived, worked, and died according to the spirit of the Gı̄tā. It is well known that Gandhi modeled his life upon the teachings of the Gı̄tā and “constantly referred to it as his ‘spiritual dictionary,’ ‘the mother who never let him down,’ or his ‘kāmdhenū,’ ‘the cow that grants all wishes’.” The Gı̄tā played a pivotal role in guiding, shaping, and solidifying his beliefs and actions.

Gandhi’s firm and sustained belief in spiritual freedom (mokṣa) and self-realization was almost entirely shaped by the teachings of the Gı̄tā. As Gandhi himself tells us in his autobiography and other writings, the Gı̄tā’s emphasis on self-realization and selfless service were the primary sources of inspiration for his life and leadership. This chapter will also examine the question of whether the Gı̄tā advocates war, especially in the light of Gandhi’s interpretation of the Gı̄tā and the epic of the Mahābhārata.

Cite this chapter as:
Dhiman S. (2019) Be the Change: The Making of a Servant Leader. In: Bhagavad Gītā and Leadership. Palgrave Studies in Workplace Spirituality and Fulfillment. Palgrave Macmillan, Cham