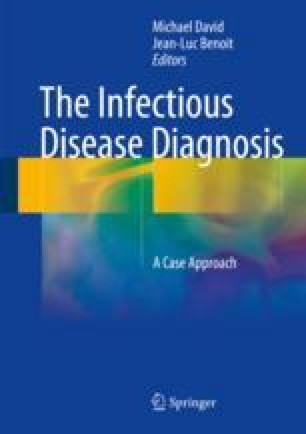 A Young Adult with Cough and Wheezing Since Infancy

A 20-year-old man presented for outpatient evaluation of treatment options for recurrent respiratory papillomas. He was born with vocal cord paralysis. At 4 weeks of life, he underwent tracheostomy. In childhood his tracheostomy was closed, and he was found to have occasional, small papillomas in the trachea. During puberty, he experienced a dramatic increase in the number and size of the papillomas.

A 20-year-old male presented to the Infectious Diseases clinic for evaluation of treatment options for recurrent respiratory papillomas. The patient was born with vocal cord paralysis and underwent tracheostomy at 4 weeks of life. At age 2 months, he was found to have a papilloma in his trachea, which was treated with intralesional steroids and laser excision. During his childhood years, his tracheostomy was closed, and he was found to have occasional, small papillomas in the trachea on airway inspection. However, when he reached puberty, the number and size of the papillomas increased dramatically. He required laryngoscopies for excision of the papillomas and intralesional cidofovir injections approximately every 3 months. Shortness of breath and hoarseness would develop periodically, indicating the need for a laryngoscopy in the near future.

At age 13 years, the patient was found on chest imaging to have pulmonary lesions, which was concerning for lower respiratory tract spread of the papillomas. He was begun on weekly α-interferon injections, which he continued for approximately 1 year. Unfortunately, the size and number of his papillomas did not improve, nor did the frequency of his laryngoscopies. He was given a guarded prognosis, which prompted a second opinion at a tertiary medical center.

At age 16 years, the patient was admitted to our pediatric hospital for bronchoscopy and laryngoscopy. He was found to have diffuse circular papillomas throughout the trachea. A large sessile lesion was found almost completely occluding the entrance to the right upper lobe. The Pediatric Infectious Diseases service was consulted, who recommended addition of inhaled cidofovir therapy and sulindac, which is a nonsteroidal anti-inflammatory drug that had been shown in in vitro studies to induce apoptosis of human papillomavirus (HPV)-associated cervical carcinoma cells.

The patient continued with laryngoscopies approximately every 3 months for excision of papillomas. At age 20 years, he presented to the emergency department with hemoptysis. Repeat chest computed tomography (CT) scan demonstrated complete obstruction of the right upper lobe bronchus with a large endobronchial mass, which was presumably a papilloma (Fig. 13.1). The patient was also noted to have a postobstructive pneumonia and interval worsening of severe mediastinal lymphadenopathy. Bronchoscopy and endobronchial ultrasound and biopsy of the mass were performed. Pathology revealed squamous papilloma with focal, severe dysplasia. The patient completed a course of antibiotic therapy for pneumonia and was scheduled with the adult Infectious Diseases clinic for consideration of additional treatment options.
The patient was restarted on α-interferon. Tissue from a recent papilloma excision was sent for HPV genotyping, which was consistent with either HPV 6 or 11. Figure 13.2a shows positive nuclear staining for low-risk HPV DNA (serotypes 6 and 11) within a benign intra-airway papilloma using in situ hybridization. With the knowledge that his HPV type was included as a component of the commercially used recombinant HPV vaccine, the decision was made to administer the vaccine series in an effort to stimulate an HPV-directed immune response. Additionally, topical imiquimod was applied to the vaccine injection site, which is currently being evaluated in clinical trials as a way to augment the HPV vaccine-associated immune response.
Unfortunately, the patient continued to have hemoptysis, and repeated laryngoscopies showed no regression of his papillomas. Intravenous cidofovir therapy was initiated, but shortly thereafter he required another admission for refractory hemoptysis, which was found to be stemming from the large, right-sided endobronchial lesion. After multiple failed bronchial artery embolizations, the patient underwent right pneumonectomy. He initially did well after surgery and was discharged to home on oxygen administered by nasal cannula. However, he presented approximately 1 week later with shortness of breath. He was found to have hypercarbic respiratory failure, which progressed to acute respiratory distress syndrome (ARDS), and this was the cause of his death at age 20 years. Of note, pathology from his pneumonectomy revealed squamous cell cancer with positive mediastinal lymph nodes. Figure 13.3 shows a cut section of the lung with multiple areas of squamous cell carcinoma invading the adjacent lung parenchyma. Figure 13.4 shows photomicrographs of four pathologic specimens obtained at the time of pneumonectomy.

HPV is a DNA virus that causes common warts, anogenital warts, and a number of cancers in immunocompetent and immunocompromised hosts. It has more than 100 types. Several of the manifestations of HPV infection and their associated HPV types are presented in Table 13.1. Cutaneous warts include deep plantar warts, common warts, and plane or flat warts. Anogenital HPV infections, including condyloma acuminata, are the most commonly acquired viral sexually transmitted infections. Notably, there is a strong association between HPV and development of malignancy, including cancer of the cervix, vulva, vagina, penis, anus, and oropharynx, among other locations. Gardisil (Merck, West Point, PA) and Cervarix (GlaxoSmithKline, London, UK) are two recombinant HPV vaccines that have been developed to prevent HPV-associated anogenital warts, dysplasia, and cancers in males and females via the production of neutralizing antibodies. Gardisil is indicated for males and females between the ages of 9 and 26 years. Initially, Garidisil was a quadrivalent vaccine, protecting against HPV serotypes 6, 11, 16, and 18. More recently, five additional serotypes have been added to the recombinant vaccine. Three randomized, double-blind, placebo-controlled clinical trials examined the efficacy of quadrivalent Gardisil for prevention of HPV-associated disease in females aged 16–26 years. Per-protocol data from these trials showed an efficacy against HPV 6-, 11-, 16- and 18-related cervical intraepithelial neoplasia 2 of 98.2% and vulvar intraepithelial neoplasia 2/3 of 100%. Efficacy against HPV 6- and 11-associated genital warts was 98.9%. Of note, in the trials assessing females with HPV vaccine type detected at study enrollment, there was no change in progression to disease with administration of the vaccine. In males aged 16–26 years, quadrivalent Gardisil was shown in one trial to have a per-protocol efficacy against HPV 6-, 11-, 16-, and 18-related genital warts of 89.4%.
Table 13.1

Respiratory papillomas are the most common benign laryngeal tumor in children. Juvenile recurrent respiratory papillomatosis (RRP) is typically identified between the ages of 2 and 3 years and is related to acquisition of HPV during passage through the birth canal of an infected mother. Risk factors for development of RRP include being a firstborn child, which often implies longer labor, having a teenage mother with genital condylomata, and having a mother with a lower socioeconomic status. RRP is caused most commonly by HPV types 6 and 11 and less commonly by type 16. The estimated incidence of juvenile RRP is 4.3 per 100,000 children. RRP can cause obstruction of the larynx, which can lead to hoarseness and respiratory difficulty. Laryngoscopy will often reveal multiple verrucous growths along the true vocal cords, along the false vocal cords, in the subglottic region, and in the trachea.

Many children with RRP will require multiple procedures to excise the papillomas. Often, the lesions will diminish around puberty. Rarely, the papillomas can spread into the lower respiratory tract and undergo malignant transformation. Multiple therapies have been attempted for RRP, including interferon, photodynamic therapy, ribavirin, acyclovir, intralesional and intravenous cidofovir, intralesional mumps vaccine, bevacizumab, and others. Systemic therapy should be considered when the patient requires more than four surgical interventions per year, when there is evidence of spread to the lungs, when the papillomas are noted to regrow rapidly after excision, and when there is airway obstruction. Approximately 10% of patients with RRP will require systemic therapy. α-interferon is the most common systemic therapy utilized in patients with RRP. It is believed to trigger a host immune response that inhibits viral protein synthesis. However, responses have been mixed in the literature and there are tolerability concerns. Some experts recommend a trial of α-interferon for 6 months followed by an assessment of disease response before deciding to continue.