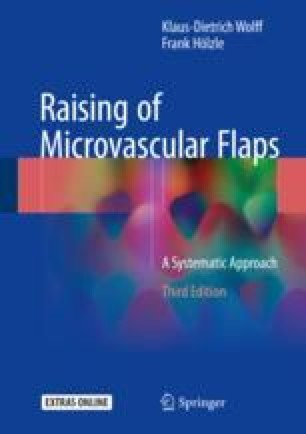 As the first myocutaneous flap, the latissimus dorsi flap was described already in 1896 by Tansini [523] and used for defect coverage following radical mastectomy by D’Este in 1912 [110]. Despite its excellent suitability for chest wall reconstruction, the flap did not become popular until the 1970s, when a number of publications appeared, in which the previously described advantages were confirmed and further indications for defect coverage in the area of the shoulder and arm were proposed [56, 57, 340, 349, 358, 378, 400, 491]. The first application of a pedicled latissimus dorsi flap for reconstruction in the head and neck area was described by Quillen in 1978 [415], whereas the microvascular transfer of this flap was performed by Watson in 1979 [569]. In further publications, the reliability and safety of this flap, especially its usefulness for reconstructions in the head and neck area, was demonstrated [200, 343, 344, 426, 429, 487, 569]. In all these reports, a great variety of application possibilities was described. This broad indicational spectrum was possible because of the large amount of tissue available, offering various possibilities for changing the flap design, and the long and high-caliber vascular pedicle, making microvascular anastomoses technically easy [380, 426, 429, 433]. A particular indication of the latissimus dorsi flap is the covering of large perforating defects of the oral cavity, using two skin paddles, which can be outlined along the transverse and vertical branch of the thoracodorsal artery [29, 208, 333, 380]. The inclusion of a rib allows for an osteomyocutaneous transfer and was proposed for the reconstruction of the mandible or other parts of the facial skeleton [220, 325, 334]. Another indication of this broad and flat muscle is reconstruction of the scalp, especially when used as a muscle-only flap, which is covered by a skin graft [173, 380, 433, 508], or as a myofascial flap to cover defects at the skull base [428]. Motor reinnervation of the muscle flap has been described by Harii, who connected the thoracodorsal nerve to the facial nerve for rehabilitation of the paralyzed face [198]. For tongue reconstruction, an anastomosis to the hypoglossal nerve was performed [226, 429]. After de-epithelization, musculo-subcutaneous flaps are obtained, which were used for contour augmentations in the head and neck area [130, 380, 429]. Apart from applications in the head and neck area, a lot of other useful indications exist for this very popular free flap, such as reconstructions of the female breast [56, 99, 278], chest wall and axilla [18, 340, 349], shoulder and upper extremity [305, 320], closure of hernias of the diaphragm [38], or other intrathoracic defects [90, 94, 486]. Moreover, defect coverages at the lower extremities [56, 111], the sacrum [453], and treatments of chronic osteomyelitis have been performed using this flap [14, 218].