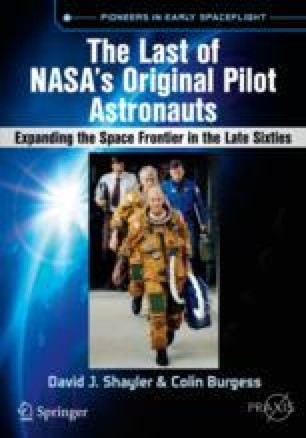 One by one, the members of the 1966 and 1969 selections retired from the active flight list. While some moved into management roles, a few returned to their parent service, moved into the aerospace industry, or assumed consulting roles. Each of them has since had a varied and interesting life outside of the military and NASA, as briefly summarized here.

“I thoroughly enjoyed my 25 years at Johnson Space Center and the great experience of working on the programs from Apollo through Space Shuttle.”

Vance Brand, upon his departure from the Astronaut Office, NASA News Release, March 12, 1992.

“Jim Irwin was not just a Group 5 NASA astronaut, he was also my office mate and my very good personal friend,” recalled Apollo 15 CM Pilot Al Worden in 2017. “He was a quiet and thoughtful guy, who never raised his voice and always fell in line with the current thinking of our commander. I used to tell Jim that he should be more assertive about the things he believed in, including procedures to be used on Apollo 15. Jim was a follower, and that was the right thing for him as he was the Lunar Module Pilot of 15, which meant he was the systems engineer for both the Command Module on the way to and from the Moon, and as co-pilot to Dave Scott in the Lunar Module on it’s way to the lunar surface at Hadley Rille. Jim was a flawless complement to Dave and did his job superbly. I had known Jim since we were selected for the space program, and I got to know him like a brother. He was always easy to work with because he did his job in a very quiet and professional way.

“Jim and I shared an office for many years while training for our flight, although I did not see him a lot because he worked with the Lunar Module people at Grumman in New York and I worked with the Command Module manufacturer in California. But we did hours of geology training together and traveled extensively to study geology at various sites around the world. He became the consummate geologist along with Dave Scott, our Commander. In fact, it was Jim who found the Genesis rock while exploring the surface around Hadley Rille on the Moon.

“After he left the program and formed his Christian Fellowship organization called ‘High Flight’, he traveled around the world giving testimony with the help of his pastor from the Baptist Church in Houston, and he became an ordained minister during that time. “Jim was such an outstanding and sociable person that all who knew him loved him. He led a very active and meaningful life both during the space program and during his time with ‘High Flight’.”