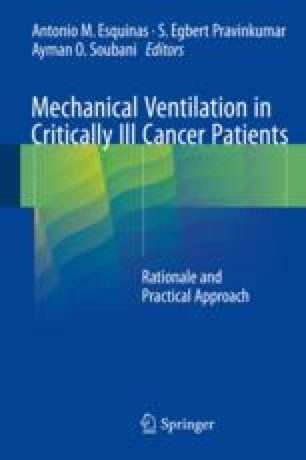 No financial or other potential conflicts of interest exist for the authors.

The incidence of all types of cancer is predicted to rise from 12.7 million new cases in 2008 to 22.2 million by 2030 [1]. Concomitantly, the last two decades have witnessed notable advances in the diagnosis and management of cancer patients including the use of high-dose chemotherapy, stem cell transplantation, targeted therapies, and immunotherapy. Although these strategies have significantly improved the overall and disease-free survival rates of patients with cancer, they have also resulted in increasing numbers of patients being admitted to the intensive care unit (ICU) for life-threatening toxic and infectious complications which are either cancer related or treatment associated.

Acute respiratory failure (ARF) is the leading cause for ICU admission in cancer patients and usually associated with high mortality rates especially in those requiring mechanical ventilation [2, 3, 4]. The incidence of ARF is about 5% in patients with solid tumors and up to 50% in those with hematological malignancies. Among hematopoietic stem cell transplant (HSCT) recipients requiring MV and ICU admission, the incidence of ARF ranges from 42 to 88% with an overall survival rate of approximately only 15% in those receiving MV [5].

Pulmonary infections are the leading cause of ARF, and the spectrum of possible responsible organisms depends on the underlying comorbidities (such as chronic lung disease, smoking history, cardiac failure, prolonged corticosteroid therapy), type of underlying malignancy, type of antineoplastic therapy, presence of neutropenia or defects in both cell-mediated and humoral immunity, frequent antibiotic exposure, and prophylactic treatments (Table 3.1).
Table 3.1

Causative organisms depending upon the underlying immune deficiency

Cancer patients with bacterial pneumonia tend to have atypical clinical features where fever is common but cough and sputum production are not. The chest radiograph may be normal or demonstrate diffuse interstitial infiltrates; the classic lobar consolidation however is usually absent. Aspiration pneumonia is common in patients who have head and neck or esophageal cancers, poor cough and difficulty clearing secretions, upper airway dysfunction due to laryngeal nerve involvement, and cancer patients who require a tracheostomy. Cancer patients who are debilitated and received enteral feedings in the supine position, those who received high-dose narcotics, and those who have central nervous system metastases are also high risk for aspiration.

Various chemotherapeutic agents can cause pulmonary toxicity resulting in ARF in cancer patients. A myriad of clinical syndromes may be associated with antineoplastic-induced lung injury including interstitial pneumonitis/fibrosis, ARDS, capillary leak syndrome, hypersensitivity pneumonitis, diffuse alveolar hemorrhage (DAH), organizing pneumonia, and bronchospasm. Diagnosis should be considered in any patient who develops cough, exertional dyspnea, and low-grade fever during or several months after chemotherapy. Pulmonary function tests usually reveal a restrictive defect with reduced diffusing capacity. Chest imaging shows patchy or diffuse ground-glass opacities or consolidations. Radiation recall pneumonitis can occur in patients with history of prior radiation to the chest. Chest imaging reveals pulmonary infiltrates in the same field as in the previous radiation therapy. Drugs commonly associated with radiation recall pneumonitis include doxorubicin, etoposide, paclitaxel, gemcitabine, and trastuzumab [6]. Diagnostic procedures are performed to exclude other likely etiologies especially infections or recurrence or progression of tumor. Definitive diagnosis usually requires transbronchial or open lung biopsy in conjunction with appropriate history. Management includes cessation of the implicated chemotherapeutic drug and use of systemic corticosteroids.

Radiation-induced lung injury can occur in patients who receive chest radiotherapy for intrathoracic or chest wall malignancies. Factors influencing the severity of injury include the volume of lung irradiated, the total dose, dose per fraction used, concomitant chemotherapy, and steroid withdrawal. Pathogenesis involves production of local inflammatory and fibrotic cytokines and activation of cell adhesion molecules. The lung injury can manifest either as early acute phase (radiation pneumonitis) or a late phase (pulmonary fibrosis). Radiation pneumonitis occurs 1–3 months after radiotherapy and commonly presents with insidious onset of dyspnea, cough, and fever. Interstitial or alveolar infiltrates within the irradiated field are found on chest radiograph. It is mostly self-limiting, but severe respiratory failure requiring systemic corticosteroids can also occur. Radiation fibrosis occurs 6–12 months after irradiation and is irreversible, and use of corticosteroids is not recommended.

Cancer patients who require frequent transfusions of blood and its products (including granulocyte transfusion in neutropenic patients) are most susceptible to TRALI. This syndrome presents as ARF in association with fever, hypotension, and non-cardiogenic pulmonary edema with bilateral infiltrates on chest x-ray. Pathogenesis is multifactorial and includes the passive transfer of donor antibodies directed against histocompatibility antigens or granulocyte-specific antigens in the recipient resulting in complement activation, blood products from alloimmunized female donors, and transfusion of donor serum with normal serum IgA concentrations to a recipient with anti-IgA antibodies. Diagnosis is supported by the presence of granulocyte, leukoagglutinating, or lymphocytotoxic antibodies from either donor or recipient serum. Treatment is mainly supportive and most cases resolve within a few days.

DAH is a life-threatening cause of respiratory failure in patients with thrombocytopenia, patients with hematologic malignancies, and those undergoing hematopoietic stem cell transplantation (HSCT). Common risk factors for HSCT recipients include pretransplant intensive chemotherapy, total body irradiation, thoracic irradiation, and old age. Signs and symptoms include dyspnea, cough, fever, and hemoptysis (present in one-third of cases). Chest radiograph shows diffuse interstitial and alveolar infiltrates, predominantly in the middle and lower lung zones. The diagnosis is confirmed by demonstration of progressively bloodier BAL fluid and the presence of greater than 20% hemosiderin-laden macrophages in BAL fluid. Management includes supportive measures with corticosteroids, platelet transfusions, epsilon-aminocaproic acid or recombinant factor VIIa (rFVIIa), and mechanical ventilatory support. Prognosis is usually guarded with mortality exceeding 50% in most studies.

Pulmonary leukostasis is an uncommon cause of severe hypoxemic respiratory failure in patients with acute leukemia who present with extremely high leukocyte or blast counts (>100,000/μL) and is associated with high mortality rates. In this syndrome, the leukocytes aggregate and form thrombi in the pulmonary vasculature. Another syndrome, leukemic cell lysis pneumopathy, can present within 48 hours of initiating chemotherapy. It manifests with severe hypoxemia and diffuse infiltrates secondary to leukostasis in the pulmonary vasculature and is associated with perivascular hemorrhage and interstitial edema. Management includes leukapheresis, hydroxyurea, adequate hydration, supplemental oxygen, and ventilator support in severe cases.

Anticoagulation and thrombolytic therapy are more challenging in cancer patients, because they have a higher risk of recurrent VTE than noncancer patients on one hand and a larger risk for bleeding complication on the other, especially in those with brain tumors or metastatic disease. Thus, treatment has to be individualized and based on overall goals of care. Low-molecular-weight heparins are preferred over unfractionated heparin for treating cancer patients with PE. Inferior vena cava filters are recommended to prevent or treat PE in high-risk patients with contraindications or failure of anticoagulation therapy.

The incidence of postoperative respiratory complications resulting in ARF in cancer patients can range from 6 to 76%, depending upon the type of surgery and underlying comorbidities. It is most commonly seen after thoracic and upper abdominal surgeries such as intrapericardial or extrapleural pneumonectomy and esophagectomy. Common etiologies include atelectasis, pneumonia, pulmonary edema, and bronchopleural fistula, and mortality rates are generally high.

This is a rare syndrome strongly associated with small cell lung cancer that presents with slowly progressive muscle weakness and late respiratory failure due to impaired neuromuscular junction transmission from decreased acetylcholine release. Confirmatory tests include the presence of antibodies directed against voltage-gated calcium channels and EMG showing increase in muscle action potential amplitude of at least 100% compared with pre-exercise baseline value. Therapeutic options include treatment of the underlying malignancy, drugs to increase the available acetylcholine at the postsynaptic membrane, cholinesterase inhibitors, plasma exchange, IVIg, corticosteroids, and immunosuppressive therapy.

This syndrome is a form of acute sensorimotor neuropathy that is associated with malignancies like Hodgkin’s lymphoma and chemotherapeutic agents such as vincristine, oxaliplatin, and sunitinib. Lumbar puncture reveals albuminocytologic dissociation. Management involves plasma exchange and IVIg. ARF results from progressive upper airway and respiratory muscle weakness. Close monitoring of vital capacity and inspiratory/expiratory pressures is required to prevent emergency intubation and cardiopulmonary arrest.

Upper airway obstruction can result from tumors of hypopharynx, larynx, thyroid, esophagus, and lung causing ARF. Signs and symptoms include dyspnea, wheezing, hoarseness, and stridor. These patients usually require emergent airway management including cricothyroidotomy or tracheostomy. Central airway obstruction can be endoluminal, extraluminal, or a combination of both. Endoluminal lesions can be treated with laser, electrocautery, or brachytherapy, whereas extraluminal compression requires airway stent placement.

3.6 Diagnostic Strategy and Management of ARF in Cancer Patients

A detailed clinical history and thorough physical examination are the first step to identify the cause of ARF in cancer patients. Azoulay and colleagues suggested six criteria to help identify the etiology of ARF which can be listed using the mnemonic DIRECT: delay since malignancy onset or BMT, pattern of immune deficiency, radiographic appearance, clinical experience and knowledge of the literature, clinical picture, and findings by HRCT. This strategy provides guidance for selecting empirical antimicrobial drugs and life-supporting interventions as well as other treatments and diagnostic investigations [7]. Rapid investigations and early identification of the cause of ARF have been shown to improve patient survival.

Fiber-optic bronchoscopy with bronchoalveolar lavage (FB-BAL) is the diagnostic strategy of choice for cancer patients whose respiratory symptoms are not severe enough to warrant ICU admission. However, the procedure can be associated with many complications with decline in respiratory status requiring mechanical ventilation being the most dreaded. Moreover, the diagnostic yield with FB-BAL is only about 50% prompting interest in noninvasive strategies for identifying the cause of ARF [8]. The recent expansion of new noninvasive diagnostic tools as listed in Table 3.2 requires reconsideration of the role of semi-invasive or invasive tests such as FB-BAL and lung biopsy.
Table 3.2

Finally, the diagnosis of noninfectious causes of ARF also requires a careful approach as most of these patients require a significant change in their management, such as initiation of corticosteroid therapy, addition or change in chemotherapy, or discontinuation of a seemingly toxic chemotherapeutic agent. Noninfectious causes of ARF mostly fall into one of the following three categories: (a) acute or subacute nonspecific pulmonary infiltrates with severe hypoxemia in the initial phase of malignancies, especially hematological. Chest CT and other noninvasive tests can be helpful, but management entails rapid initiation of chemotherapy and broad-spectrum antibiotics against community-acquired organisms. FB-BAL is necessary only if initial treatment fails. (b) Progressive, subacute, lung infiltrates in patients with recurrence of underlying cancer. Radiographic findings can reveal peribronchial and perivascular nodules suggestive of specific lesions or interlobular septal thickening resulting in prominent secondary pulmonary lobules manifesting as tessellating polygons suggestive of carcinomatosis. Transbronchial biopsy is really helpful in this situation. (c) Acute respiratory failure in patients receiving consolidation therapy for hematological malignancies. Chest imaging reveals diffuse interstitial infiltrates characterized by a diffuse ground-glass appearance. FB-BAL is essential to rule out opportunistic infections before chemotherapy-associated lung toxicity is considered. Lung biopsy has a role to play in this group of patients.

ARF in cancer patients portends dismal outcomes despite aggressive management. Various studies report survival rates close to 50% for cancer patients admitted to the ICU with ARF, which further declines to about 20% for those requiring MV. Factors associated with higher mortality include, but not limited to, documented invasive aspergillosis, lack of definitive diagnosis, use of vasopressors, first-line conventional MV, conventional MV after NIPPV failure, and late NIPPV.

Physicians should assist all cancer patients and their families to make informed decisions regarding the use of MV and other life-sustaining treatments in the ICU and to complete advance directives. End-of-life discussions have been shown to be associated with increased family satisfaction, less aggressive medical care near death, and earlier hospice referrals. In contrast, aggressive care is associated with worse patient quality of life and worse bereavement adjustment. Ethics and palliative care consultations also greatly benefit end-of-life discussions with family members of cancer patients dying in the ICU [10].