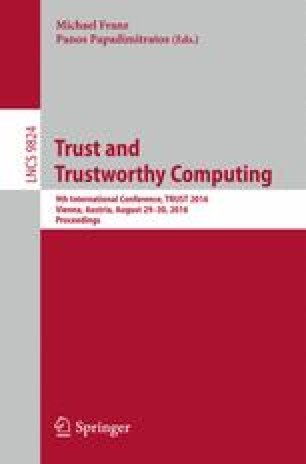 Systems designed with measurement and attestation in mind are often layered, with the lower layers measuring the layers above them. Attestations of such systems, which we call layered attestations, must bundle together the results of a diverse set of application-specific measurements of various parts of the system. Some methods of layered attestation are more trustworthy than others especially in the presence of an adversary that can dynamically corrupt system components. It is therefore important for system designers to understand the trust consequences of different designs. This paper presents a formal framework for reasoning about layered attestations. We identify inference principles based on the causal effects of dynamic corruption, and we propose a method for bundling evidence that is robust to such corruptions.

Dynamic Corruption Platform Conﬁguration Registers (PCRs) Trusted Platform Module (TPM) Quota Effects Physical TPM
These keywords were added by machine and not by the authors. This process is experimental and the keywords may be updated as the learning algorithm improves.
This is a preview of subscription content, log in to check access.

I would like to thank Pete Loscocco for suggesting and guiding the direction of this research. Many thanks also to Perry Alexander and Joshua Guttman for their valuable feedback on earlier versions of this work. Thanks also to Sarah Helble and Aaron Pendergrass for lively discussions about measurement and attestation systems. Finally, thank you to the anonymous reviewers for helpful comments in improving the paper.

A Proof of Lemmas

The following is a proof of Lemma 3

The following is a proof of Lemma 4

Definition 7 requires v to be derivable from the public terms \(\mathcal {P}\) and the output of previous messages. Call those outputs \(\mathcal {O}\).

We conclude with the complete proof of Theorem 2.

By Lemma 6, E contains a substructure \(X_\mathcal {Q}\) of extend events that extends bottom-up. Thus by Theorem 1, Conditions 2a and 2b are possibilities. So suppose instead that E satisfies Condition 1 of Theorem 1. We must show that \(E\in \mathcal {E}(S')\). In particular, we construct \(\alpha :S'\rightarrow E\) and show that it is label- and order-preserving.