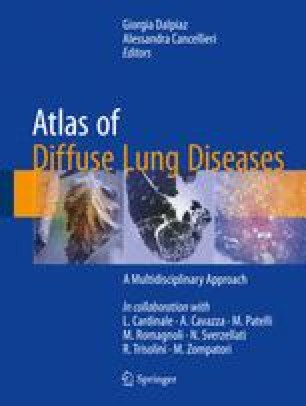 An alveolar pattern is defined by the existence of more or less broad portions of the lung more opaque than normal due to partial or complete alveolar filling. With a few exceptions, the pulmonary architecture is overall preserved, and, if signs of interstitial involvement are present, they are not prevalent. On HRCT the different opacity of the alveolar pattern reminds the variable density of the clouds.

An alveolar pattern is defined by the existence of more or less broad portions of the lung more opaque than normal due to partial or complete alveolar filling. With a few exceptions, the pulmonary architecture is overall preserved, and, if signs of interstitial involvement are present, they are not prevalent. On HRCT the different opacity of the alveolar pattern reminds the variable density of the clouds.

Why are some clouds white and others gray? The color depends on a physical characteristic called reflectance, which indicates the percentage of light that is reflected from the cloud. In general, denser clouds have a reflectance of 90 % and are thus light in color.

In alveolar diseases, this pattern is predominant; however, there are other diseases in which alveolar opacities may be found, albeit less important or sporadic. They are therefore described in the relevant chapters.

The prevalent distribution of the signs, together with the presence of non-parenchymal signs, may be helpful for the diagnosis of a specific disease (please see the tables at the end of this chapter).

On CT scans, ground-glass opacity (GGO) appears as hazy increased opacity of the lung, with preservation of bronchial and vascular margins. Ground-glass opacity is less opaque than consolidation, in which bronchovascular details are obscured. The final effect is similar to the ground glass inserted in windows and doors (please see the left image below).

Pathologically, it may be caused by partial filling of air spaces and/or interstitial (mainly, alveolar septal) thickening due to fluid and/or cells. An example, illustrated in the figures below, is mucus in pneumonia-like pattern of mucinous adenocarcinoma. There are both a diffuse partial filling of air spaces due to mucus () and the lepidic growth of the neoplasm along alveolar septa (⃞). In the close-up, note the comparison between the different thickening of the normal alveolar septa (►) and the pathological ones (➨). Please also refer to the chapter entitled “Thinking Through Pathology”.

GGO may also be due to partial collapse of alveoli, increased capillary blood volume, or a combination of these, the common factor being the partial displacement of air.

GGO may also be due to interstitial fibrosis. It is variously associated with traction bronchiectases and bronchiolectases, fibrotic reticular abnormalities, and volume loss (please also refer to chapter “ Fibrosing Pattern”).

GGO can be seen in all patients with an underlying alveolar lung disease, so its diagnostic value in isolation is limited; however, the clinical context (acute or chronic), together with the distribution and in combination with associated signs, may be helpful (please see the tables at the end of this chapter).

Engeler CE (1993) Ground-glass opacity of the lung parenchyma: a guide to analysis with high-resolution CT. AJR Am J Roentgenol 160(2):249

Consolidation appears as a homogeneous increase in pulmonary parenchymal attenuation that obscures the margins of vessels and airway walls. An air bronchogram may be present ( Open image in new window

Pathologically, consolidation is due to a complete filling of alveoli by any material (exudate, cells, or other disease product can cause a similar radiological aspect) – the common factor being the full displacement of air from alveoli. An example, illustrated in the figure below, is pulmonary alveolar proteinosis (PAP). Note the abrupt transition between the area in which alveoli are filled by proteinaceous material and the normal lung (). Please also refer to the chapter entitled “Thinking Through Pathology >Pattern >Alveolar Filling.”

Consolidation can be seen in all patients with an underlying alveolar lung disease, so its diagnostic value by itself is limited; however, the clinical context (acute or chronic) and the distribution may be helpful together with the associated signs (please see the tables at the end of this chapter).

Using mediastinal window, an attenuation of consolidation is defined hypodense when it is lower than the muscle. It may be visible on CT after intravenous contrast material administration (please see CT image below). Sometimes the hypodense consolidation may be visible on unenhanced CT (HRCT) due to very low-density material (e.g., fat ► in lipoid pneumonia). Hypodense consolidations can result from ischemia (lung infarction) or from the presence in the air space of mucinous neoplasms (primary or metastatic mucinous adenocarcinoma), mucus (obstructive pneumonia with abundant accumulation of secretions), necrosis (necrotizing pneumonia), or fat (lipoid pneumonia, see the images below). With the exception of infarct, on enhanced CT you can also find the so-called angiogram sign, i.e., the visualization of pulmonary vessels within an airless, low-attenuation consolidation (please see CT image below). Please also refer to angiogram sign in “Case-Based Glossary with Tips and Tricks”.

Hypodense consolidation is recognizable only with CT mediastinal window, and it is more visible on contrast enhancement CT (see the figure above).

MRI with “water-sensitive” sequences is useful in the diagnosis of patients with pulmonary consolidations suspected to be mucinous adenocarcinoma.

Attenuation higher than the muscle seen as dense/calcified diffuse or focal pulmonary opacities can result from a variety of different conditions. They can be due to deposition of calcium or, less commonly, other high-attenuation material such as talc, amiodarone, iron, mercury, iodinated substances, and barium sulfate.

Small and focal, hyperdense opacities inside a consolidation can be secondary to dystrophic calcifications in previously damaged lung parenchyma or, most commonly, as a result of infection diseases (►).

Cysts (black holes) inside the consolidations and the GGO may be large or small, rounded, oval or serpentine, and sometimes confluent.

and histologic images below), pseudo-cavitation (bubble-like lucencies following bronchiolar obstruction due to a check-valve mechanism), and air bronchiologram (serpentine or linear in shape due to ectatic phenomena)

“Cystic lucencies” can be found in patients with BPCO. This pattern is caused by the coexistence of consolidations and underlying severe centrilobular/paraseptal emphysema.

Crazy paving appears as ground-glass attenuation with superimposed interlobular septal thickening and intralobular lines. The crazy-paving pattern is often sharply demarcated from normal lung and may have a geographic outline, often with lobular or geographic sparing. The term crazy paving refers to the resemblance of this sign to paths made with broken pieces of stone or concrete.

In the crazy-paving sign, ground-glass opacity reflects the presence of air space or interstitial abnormalities; the lines of reticular opacities may represent interlobular septal thickening, thickening of the intralobular interstitium, irregular areas of fibrosis, or a preponderance of an air-space-filling process at the periphery of lobules or acini.

Please also refer to crazy paving in “Case-Based Glossary with Tips and Tricks”.

A crazy-paving sign can be seen as the dominant pattern only in some of the diseases listed above (e.g., PAP and lipoid pneumonia). It often represents an ancillary or uncommon finding.

On HRCT scan, head-cheese pattern is characterized by a combination of patchy lobular areas of normal parenchyma, ground-glass opacity, and mosaic oligemia with lobular air trapping (►). This definition is due to its resemblance to the variegated appearance of a sausage made of parts of the head of a hog.

Pathologically head-cheese sign is indicative of a mixed infiltrative and obstructive process. The ground-glass opacity (GGO) component represents the infiltrative portion of the underlying disease ( Open image in new window

) and vasoconstriction from localized hypoxia.

Please also refer to head-cheese sign in “Case-Based Glossary with Tips and Tricks”.

Integrating clinical and laboratory findings may indicate the most likely diagnosis in the setting of the head-cheese sign.

Reversed halo sign (RHS) is a rare sign. On HRCT images, it appears as a focal rounded area of ground-glass opacity ( Open image in new window

) surrounded by a more or less complete ring of consolidation (►). In organizing pneumonia (OP), the central ground-glass opacity corresponds histopathologically to an area of alveolar septal inflammation and cellular debris ( Open image in new window

), while the ring-shaped or crescentic, peripheral, air-space consolidation corresponds to the area of organizing pneumonia (►).

Sarcoidosis and tuberculosis may present the so-called “nodular” reversed halo sign. The nodular aspect of the RHS usually corresponds to the presence of granulomatous inflammation and most likely represents active pulmonary sarcoidosis or the granulomatous infiltrate of tuberculosis. Please refer to chapter “ Nodular Pattern.”

Despite being no longer considered specific, the presence of RHS, in association with ancillary CT findings and an appropriate clinical history, can be useful in narrowing the differential diagnosis.

COP is the most common condition described in immunocompetent patients.

Invasive fungal pneumonia should be considered until differently proven in severely immunocompromised host.

The term is most frequently used in the context of diseases (e.g., perilobular organizing pneumonia – OP, images below) which are distributed mainly around the inner contour of the secondary pulmonary lobule (►). This may result in an indistinct thickening of the interlobular septa appearing as curvilinear opacities with an arcade-like or polygonal appearances similar to the snow along a wire net (➨). Perilobular pattern is thicker and, mostly, less sharply defined than those encountered in thickened interlobular septa (please compare to septal thickening visible in chapter “ Septal Pattern”).

The term is most frequently used in the context of diseases (e.g., perilobular organizing pneumonia – OP, see images above) which are distributed mainly around the inner surface of the secondary pulmonary lobule.

Some lung diseases result in consolidation or ground-glass opacity (GGO) that involve individual lobules or groups of lobules as a whole, while adjacent lobules appear normal, giving the lung a patchwork appearance; sometimes, there may be a partial involvement of the lobule (sublobular opacities); please see Figure A.

At times, lobular/sublobular consolidations and GGO may be associated with smooth septal thickening, reminiscent of a ginkgo biloba leaf. We defined this feature “ginkgo biloba sign” (Figure B). Note that the GGO sublobular areas present a gravitational-dependent distribution inside the lobules.

Many other alveolar acute and chronic diseases may present with lobular/sublobular consolidations and GGO but not as the prevalent feature.

In some patients with lobular ground-glass opacity visible on thin-section CT scans, superimposition of a reticular pattern results in the crazy-paving appearance (please see this sign in this chapter but also in “Case-Based Glossary with Tips and Tricks”).

The tree-in-bud (TIB) pattern results in a V- or Y-shaped branching pattern together with centrilobular nodularity. This pattern also resembles the small objects used in the childhood game of jacks (see the image below).

The nodules and connecting branches are peripheral but spare the subpleural lung. In acute disease, TIB may present ill-defined margins ( Open image in new window

The bronchiolar tree-in-bud sign reflects a spectrum of endo- and peribronchiolar disorders, including mucoid impaction or inflammation of the wall (➨).

Post-processing techniques such as maximum-intensity projections (MIP) facilitate the recognition of the tree-in-bud pattern (please compare the two coronal images above).

Rarely, neoplastic conditions such as pulmonary arterial metastases of adenocarcinoma may result in a “vascular” tree-in-bud sign (please also refer to vascular tree-in-bud in “Case-Based Glossary with Tips and Tricks”).

Evaluation of the clinical onset of the symptoms for each patient is the suggested way to duly frame subsets of disorders. In particular, one should know if the onset of respiratory symptoms dates back from days to a few weeks (subset acute) or instead from months to years from the time of diagnosis (subset chronic).

The acute alveolar pattern usually presents with bilateral and often extensive consolidations and ground glass which may change in appearance, location, and size within hours or days.

The chronic form usually presents with consolidations often localized and patchy which progress slowly, even over weeks or months. GGO often coexists. There may be architectural distortion in long-time disease.

Other signs may be variously associated.