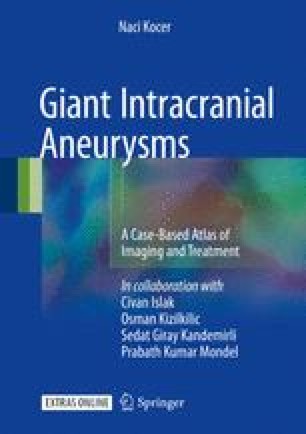 A 32-year-old man presented with headache and diaphoresis. (a) NECT reveals a hyperdense mass in the right ambient cistern (arrow). In 2007, cerebral DSA shows a right PCA (P2 and P3 segments) dolichoectatic fusiform enlargement. (b) After a period of 6 years, the patient presented with worsening symptoms; a repeat MRI on 2013 reveals a heterogeneous predominantly hypointense mass with peri-lesional vasogenic edema in the right deep temporal region adjacent to the mesencephalon probably along the choroidal fissure. Postcontrast MRI images show serpentine enhancing vessels within the heterogeneous mass. (c) On March 2013, cerebral DSA shows a giant serpentine aneurysm of the right P2 and P3 segments. The serpentine aneurysm has evolved from the previously seen dolichoectatic fusiform enlargement of the same segment. There is normal caliber and perfusion of the distal PCA territory with prolonged circulation time. (d) On March 2013, the patient was treated by parent vessel occlusion of the PCA with detachable coils. The coiling involved occlusion of proximal segment of the serpentine fusiform enlargement. The distal PCA branches were opacified by pial-pial collaterals through MCA. (e) At a 1-year follow-up, cerebral DSA shows exclusion of the aneurysm from the circulation with stable collateral flow and perfusion into the distal PCA territory. (f) Follow-up cranial MRI 2 years after treatment reveals decreased mass effect on brain stem and adjacent brain parenchyma. Around the residual thrombosed mass, no edema was detected. There is no patent serpentine lumen within the mass (axial T2W, non-contrast T1W, postcontrast T1W, coronal postcontrast T1W)

Vasogenic Edema Parent Vessel Detachable Coil Normal Caliber Ambient Cistern
These keywords were added by machine and not by the authors. This process is experimental and the keywords may be updated as the learning algorithm improves.