Mathematical and Statistical Modeling for Emerging and Re-emerging Infectious Diseases 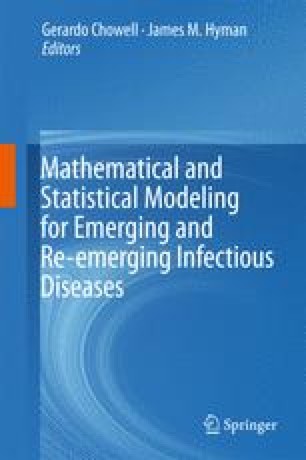 Modeling the Case of Early Detection of Ebola Virus Disease

The most recent Ebola outbreak in West Africa highlighted critical weaknesses in the medical infrastructure of the affected countries, including effective diagnostics tools, sufficient isolation wards, and enough medical personnel. Here, we develop and analyze a mathematical model to assess the impact of early diagnosis of pre-symptomatic individuals on the transmission dynamics of Ebola virus disease in West Africa. Our findings highlight the importance of implementing integrated control measures of early diagnosis and isolation. The mathematical analysis shows a threshold where early diagnosis of pre-symptomatic individuals, combined with a sufficient level of effective isolation, can lead to an epidemic control of Ebola virus disease.

The Ebola viral strains are re-emerging zoonotic pathogens and members of the Filoviridae family consisting of five distinct species: Bundibugyo, Cotes d’Ivoire, Reston, Sudan, and Zaire with a high case-fatality rate in humans [1]. Filoviruses are long filamentous enveloped, non-segmented, single-stranded viruses, consisting of a negative-sense RNA genome [2]. Each Ebola species genome encodes seven linearly arranged genes: nucleoprotein (NP), polymerase cofactor (VP35), matrix protein (VP40), glycoprotein (GP), replication-transcription protein (VP30), matrix protein (VP24), and RNA-dependent RNA prolymerase (L) [2]. While there are no proven effective vaccines or effective antiviral drugs for Ebola, containing an outbreak relies on contact tracing and on early detection of infected individuals for isolation and care in treatment centers [2]. The most recent Ebola outbreak in West Africa, which began in December 2013, due to the Zaire strain, demonstrated several weaknesses in the medical infrastructure of the affected countries, including the urgent need of effective diagnostics, which have a fundamental role in both disease control and case management.

The Ebola virus is transmitted as a result of direct contact with bodily fluids containing the virus [3]. The virus enters via small skin lesions and mucus membranes where it is able to infect macrophages and other phagocytic innate immune cells leading to the production of a large number of viral particles [2]. The macrophages, monocytes, and dendritic cells infected in the early stage of the disease serve to spread the virus throughout the organs, particularly in the spleen, liver, and lymph nodes [2]. Consequently, critically ill patients display intensive viremia [4]. Recognizing signs of Ebola viral disease is challenging because it causes common non-specific symptoms such as fever, weakness, diarrhea, and vomiting, and the incubation period typically lasts 5–7 days [3]. Therefore, functioning laboratories and effective point-of-care diagnostic tests are critically needed in order to minimize transmission, allow better allocation of scarce healthcare resources, and increase the likelihood of success of antiviral treatments as they are developed [5].

There is an ongoing effort in place to improve Ebola diagnostics, primarily to detect the disease early. Currently, the cost and difficulty of testing limit diagnostic facilities to small mobile laboratories or centralized facilities with turnaround times measured in days rather than in a few hours, meaning that diagnosis is largely used to confirm disease. Ebola diagnosis can be achieved in two different ways: measuring the host-specific immune response to infection (e.g. IgM and IgG antibodies) and detection of viral particles (e.g. ReEBOV Antigen Rapid Test Kit for VP40), or particle components in infected individuals (e.g. RT-PCR or PCR). The most general assay used for IgM and IgG antibody detection are direct ELISA assays. Considering the physiological kinetics of the humoral immune system as well as impaired antigen-presenting cell function as a result of viral hemorrhagic fever, antibody titers are low in the early stages and often undetectable in severe patients prior to death [6]. This leaves polymerase chain reaction (PCR) for antigen detection as a viable option for early diagnostic assays. PCR is a chemical reaction that amplifies pieces of a virus’s genes floating in the blood by more than a millionfold, which makes detection of pre-symptomatic individuals likely identifiable. Indeed, a research article published in 2000, illustrates the power of this technology to detect Ebola virus in humans in the pre-symptomatic stage [7]. In this study, 24 asymptomatic individuals who had been exposed to symptomatic Ebola patients were tested using PCR. Eleven of the exposed patients eventually developed the infection. Seven of the 11 tested positive for the PCR assay. And none of the other 13 did.

In this chapter, we extend the work presented in [8]. Here, we have developed and analyzed a mathematical model to evaluate the impact of early diagnosis of pre-symptomatic individuals on the transmission dynamics of Ebola virus disease in West Africa, under the assumption that the disease is maintained possibly at very low levels due to the deficiencies in health systems and our incomplete understanding of Ebola infection as illustrated by the case of Pauline Cafferkey. Therefore, eliminating Ebola may require a more sustained and long-term control effort.
Table 1

The total population is assumed to be classified into six mutually independent subgroups: susceptible S(t), non-detectable latent \(E_1(t)\), detectable latent \(E_2(t)\), infectious I(t), isolated J(t), and recovered R(t) individuals. Table 1 shows the state variables and their physical meaning. The transition between all these states is shown in Fig. 1. And model parameters and their description are presented in Table 2. Parameter values have been obtained from previous studies [9, 10].

Since model (2) imitates the dynamics of human populations, all variables and parameters should be non-negative. Thus, following the approach shown in appendix A of [12], we show the following result.

The variables of model (2) are non-negative for all time.

The local stability of the Ebola-free equilibrium, \(E_0\), for values of \(\mathscr {R}_c < 1\) is established based on a direct use of Theorem 2 in [15]. We summarize our result in the following lemma.

This percent impact of the parameters on \(\mathscr {R}_c\) remains so as long as isolation is highly effective. However, if the effectiveness of isolation is low, in the sense that all parameter values are kept the same except the value of the parameter r, which is reduced to 0.35, then we get the results presented in Table 3. In this case, both the relative transmissibility \(\ell \) and the removal rate of isolated individuals, \(\gamma _r\), are the second most sensitive parameters, after \(\beta \) which is the most impactful one. Also, \(\ell \) became more sensitive than r. The implication is that, when isolation is less effective, there exists the possibility for isolated people to make successful contacts with susceptible individuals and therefore the possibility of causing new infections increases. This causes an increase in the reproduction number. Also, it is noted that the effect of \(f_T\) and \(\alpha \) is reduced, which means that diagnosing and isolating infected individuals becomes a weak strategy if the effectiveness of isolation is low.

On repeating the previous analyses, but this time for a higher value of \(f_T\) (\(f_T = 0.75\)), we obtain the results shown in Table 3. In comparison to the scenario when \(f_T = 0.25\), the simulations show that increasing the fraction of pre-symptomatic individuals who are diagnosed and isolated, \(f_T\), increases the percent impact of the parameters \(r, \ell , \gamma _r,\) and \(f_T\), and decreases the percent impact of the parameters \(\gamma \) and \(\alpha \), on the value of the control reproduction number \(\mathscr {R}_c\).

3.4 Impact of Early Detection and Isolation on the Value of \(\mathscr {R}_c\)

The Ebola epidemic has shown us major weaknesses not only in health systems in West Africa, but also in our global capacity to respond early to an outbreak with effective diagnostic capacities. After multiple outbreaks of infectious diseases, from severe acute respiratory syndrome (SARS) to Middle East respiratory syndrome coronavirus (MERS-CoV), we still do not have effective diagnostic tools to rapidly respond to a number of potential epidemics. The main reason why we lack of such diagnostic preparedness against infectious diseases is because of the lack of a financed global strategy that can be implemented ahead, rather than during an epidemic. This strategy must primarily focus on two critical aspects: First, a continuous interaction between the field to detect small outbreaks and collect samples, and reference laboratories with advanced sequencing tools to identify the pathogen. Second, the need of assay development for early diagnosis, their regulatory approval, and a plan of implementation in anticipation of an outbreak.

Here, motivated by some studies showing that PCR assay can detect Ebola virus in both humans and non-human primates during the pre-symptomatic stage [7, 11], we have developed and analyzed a mathematical model calibrated to the transmission dynamics of Ebola virus disease in West Africa to evaluate the impact of early diagnosis of pre-symptomatic infections . In the absence of effective treatments and vaccines, our results show the importance of implementing integrated control measures of early diagnosis and isolation. Importantly, our analysis identifies a threshold where early diagnosis of pre-symptomatic individuals, combined with a sufficient level of effective isolation, can lead to an epidemic control of Ebola virus disease. Furthermore, the need to incorporate vital dynamics is justified by our still limited understanding of Ebola infection including whether or not Ebola virus may persist among recovered individuals. The use of \(\mathscr {R}_c\) in this context reflect our view that control measures should be sustainable and not just in response to an outbreak.

We thank Benjamin Katchman for the helpful discussions about the different types of molecular diagnostics of Ebola.