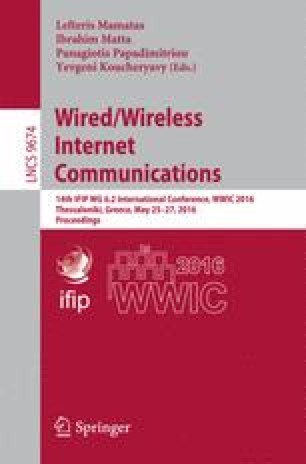 On the Energy Inefficiency of MPTCP for Mobile Computing

Mobile devices have embraced Multi-Path TCP (MPTCP) for leveraging the path diversity. MPTCP is a double-edged sword since mobile phones are suffering excessively from short battery life span. In order to find energy efficiency of MPTCP, the signal quality and the transferred file size have been taken into account. We formulate the above problem as a Markovian Decision Process (MDP) for symmetric and asymmetric network traffic. Numerical and simulation results surprisingly show that MPTCP is not efficient in any selected scenarios and the proposed scheme can save 56 % of energy compared to the conventional MPTCP.

Wide coverage oriented cellular base stations and WiFi hot-spots coverage go hand in hand with arming mobile phones by different transmission interfaces such as cellular and WiFi, enhance the users’ ubiquitous connectivity. Due to the error-prone nature of wireless channels, poor wireless signal quality is frequently experienced spatially and temporally by end users. It has been shown that the signal quality in WiFi or cellular-based networks dips in most cases. For instance, 43 % and 21 % of mobile phone data traffic is transmitted during low cellular and WiFi signal strength, respectively [2]. In addition, low signal strength could drain the mobile device battery. Due to the limited nature of mobile phone batteries, meeting high quality of service (QoS), while maintaining reasonable level of energy consumption, is of great importance for end-users. It is noteworthy that reaching high QoS and energy efficiency is not possible, in many cases, due to their conflicting requirements. Thus, designing a proper scheme to obtain reasonable levels of QoS and energy efficiency is critical.

Recently, MPTCP is introduced to enhance TCP performance by exploiting the path diversity [3, 12]. However, base MPTCP suffers from energy inefficiency in mobile phones. For instance, when a mobile phone experiences poor signal quality, not only is an adverse effect on energy consumption inevitable, but also QoS degradation is unavoidable. In [11] we show that the available bandwidth could be estimated by getting the signal quality as an observation and applying hidden Markov model; however, throughput is a more trustworthy metric to understand the different platforms energy consumption. In order to estimate the throughput accurately it is also important to consider the transferred file size. We explore how file size affects the throughput and how to estimate the file size by queue dynamics. The objective of this paper is to investigate whether MPTCP is more energy efficient than WiFi and LTE in real scenarios by leveraging simultaneous uploads and downloads in symmetric and asymmetric traffic pattern. Therefore, we proposed Signal Aware MPTCP (SA-MPTCP) to enhance MPTCP energy efficiency. The contribution of this paper is threefold as follows:

The paper is organized as follows. Section 2 introduces the energy model, and shed light on the effect of file size on MPTCP throughput. Section 3 describes the problem formulation. Section 4 outlines the simulation results, and Sect. 5 reviews the related works. Finally, we conclude in Sect. 6.

The proposed model aims to optimize the transmission energy consumption as a utility function based on signal strength and transferring file size. In the following, we describe the underlying network model and assumptions for the problem at hand.

2.2 Effect of File Size on Throughput

Estimating the available bandwidth by knowing the signal quality is possible. For instance, Fig. 1 shows the uplink and downlink throughput as a function of received signal strength indicator (RSSI), where data is extracted from [2, 5, 9]. However, the amount of transfer size has a significant effect on MPTCP throughput. In Figs. 2 and 3 throughputs for MPTCP, WiFi and LTE have been plotted based on the transferred file size if the WiFi and LTE RSSI are (−76,−90) and (−106,−135), respectively. As it can be seen as the file size increases, the throughput reaches to the maximum capacity, which is the available bandwidth. Based on the available signal quality state and file size, the uplink and downlink throughputs could be estimated by a regression model. We have calculated the uplink and downlink coefficient for the noted RSSI states in Tables 2 and 3. The uplink throughput for interface i is defined as
$$\begin{aligned} \begin{aligned} Th_{u,i}=\kappa ^{u}_{i}*(L^u)^{\eta ^u_i}+ \iota _i^u, \end{aligned} \end{aligned}$$
(5)
where \( \kappa ^{u}_{i} \) and \(\eta ^u_i \) are uplink coefficients for interface i. Downlink throughput is equal to
$$\begin{aligned} \begin{aligned} Th_{d,i}=\kappa ^{d}_{i}*(L^d)^{\eta ^d_i}+ \iota _i^d, \end{aligned} \end{aligned}$$
(6)
where \( \kappa ^{d}_{i} \) and \(\eta ^d_i \) are defined as downlink coefficients for interface i . It is noteworthy that the number of selected states uplink and downlink tables should be calculated prior to the simulation.
Table 2.

Before discussing decision rules and policies, we have to shed light on cost calculation. In order to get the benefit of high accuracy of throughput estimation we need to have information about file size. Therefore, we use the backlog queue to have a better understanding of transferring file size.

In order to appraise the proposed algorithm, we have performed the simulations by ns-3 (https://www.nsnam.org). The simulation parameters are included in Table 4. We have considered three LTE and three WiFi signal quality states. Based on the selected states, we found nine spots on the simulation field as it noted in Fig. 4. We calculated nine upload and download tables as in Tables 2 and 3. Before the simulation the best policy in each state for different arrival rates have been calculated. After that the traffic has been generated between two nodes, and the mobile node (UE-1) moves from one spot to another by using the most efficient policy in each state.

In order to compare the proposed scheme to other platforms, we have simulated the same scenario using MPTCP, WiFi, and LTE in all spots. Also to have a practical perspective and general view of how the system works, two different file sizes have been selected for uploading and downloading in symmetric and asymmetric traffic scenarios.
Table 4.

From Figs. 5, 6, 7 and 8, the optimal policies have been marked by a red arrow. Taking the advantage of the packet capture feature of NS3, we have plotted the energy consumption behavior of other policies in each state. SA-MPTCP optimal decision was completely compatible with real simulation and surprisingly MPTCP has not been chosen in any scenario. In fact, this is the first time that uploading and downloading have been considered together, and the results contrast prior research such as [4, 6]. Most of the time either WiFi or LTE are the best policy and even according to Fig. 6 WiFi is the best option for uploading small file size and downloading large file size. SA-MPTCP energy consumption outperforms other platforms.

MPTCP has been investigated widely from different perspective; nonetheless, energy efficiency attracts the growing interest of researchers. Comparison of TCP over LTE and WiFi with MPTCP in terms of energy efficiency have been discussed in [6] by modeling, measuring and simulating. The authors proposed eMPTCP, which manages subflows expected energy efficiency based on available throughput. In fact eMPTCP is the most similar work to us, but the difference is eMPTCP only considered the downloading case and doesn’t take the uploading energy into account. In addition, to estimate the available throughput eMPTCP sampled downloaded bytes, which introduces the overhead to a network.

GreenBag [1] was proposed as a bandwidth aggregate middleware on wireless links. It estimates the available bandwidth on wireless links and specifies the amount of traffic allocation while taking QoS into account. GreenBag reduces energy consumption between 14 % to 25 %; however, it needs major applications modification which is not feasible. Peng et al. [6] designed a MPTCP algorithm, decreasing energy consumption up to 22 % by intelligently compromising between throughput and energy. However, they only considered bulk data applications such as video streaming and file transfer, and they did not consider the effect of signal strength on throughput.

Markov decision process has been applied by [7] to utilize the optimal interface for different applications. Nevertheless, authors only considered throughput and stationary applications which is infeasible in dynamic environment. For instance, each application has different traffic patterns, and modeling all applications traffic is not practical. Furthermore, the optimal throughput performance is only achieved by one path, and more importantly the system performance would dwindle immensely when the optimal path is the most congested one. Energy aware MPTCP is proposed in [8] to balance the increasing throughput with the energy consumption. Unfortunately, data has been offloaded simply to WiFi whenever possible since they assumed WiFi consumes less energy than LTE. That assumption may not be true in many scenarios. In fact, when a mobile device experiences a weak WiFi signal, not only a huge amount of packet loss and delay would be irrefutable [5], but also as we showed, energy cost would increase sharply.

Lim et al. [5] proposed an inspiring algorithm, MPTCP-MA, which manages the path establishment by taking cross layer information, such as Mac layer behavior. They endeavored to increase the WiFi throughput efficiency up to 70 %; nonetheless, energy efficiency hasn’t been taken into account, and they haven’t addressed cellular networks behavior. In contrast to most studies, Tailless MPTCP (TMPTCP) [10] showed that MPTCP energy efficiency could be enhanced by the tail energy minimization. Since the tail energy has a enormous impression on the energy contribution, TMPTCP optimizes jointly energy and delay. However, TMPTCP deals with static bandwidth and the offline experiment demands more investigation.

In this paper, we studied the problem of energy efficiency in the context of multi-path TCP. We proposed a control mechanism based on Markov Decision Process to distribute traffic over diverse paths while optimizing energy. Performance of the proposed control mechanism was evaluated and compared with the different platforms. The results indicate that the proposed control mechanism significantly outperforms other schemes in all considered scenarios and MPTCP is not energy efficient in any selected cases. Even though we have applied our approach to LTE, the model could simply extend to 3G networks. The effect of delay would be investigated in future work.