A History of Disease in Ancient Times 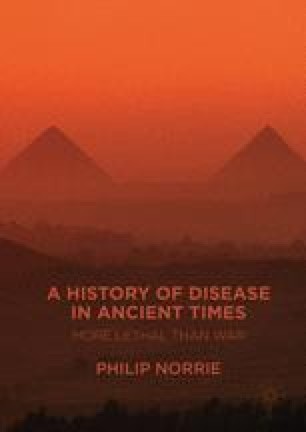 This book has discussed the history of disease in ancient times. The purpose of this book was to show that disease was a significant contributing causal factor in history; especially in ancient times and reflects the fact that history is not just made up of dates of battles and the list of monarchs and when they reigned. Second it looked at the possible diseases may of the era and third it questioned the status quo such as whether the 1322 bce Hittite epidemic ended the Hittite Empire.

Natural Catastrophe Ancient Time Mass Migration H1N1 Swine Bubonic Plague
These keywords were added by machine and not by the authors. This process is experimental and the keywords may be updated as the learning algorithm improves.
Download chapter PDF

This book has discussed the history of disease in ancient times. The purpose of this book was to show that disease was a significant contributing causal factor in history; especially in ancient times and reflects the fact that history is not just made up of dates of battles and the list of monarchs and when they reigned. Second it looked at what the possible diseases may have been and third it questioned the status quo such as whether the 1322 bce Hittite epidemic ended the Hittite Empire.

This book has shown that disease can have a significant impact on major historic events, that is, events that are significant enough to change the course of history, such as the end of the Bronze Age and the Hittite Empire. It has shown that disease, in the form of several infectious disease epidemics, fits the medical model to explain three factors about the end of the Bronze Age, namely the short time frame of the Catastrophe, the mass migrations of not only the general population but also the “Sea Peoples” and the abandonment of cities during the Catastrophe.

The importance of the impact of disease on history has been championed by a few sociologists and historians. Warren Robertson from Drew University, New Jersey, USA stated in his book Drought, Famine, Plague and Pestilence Ancient Israel’s Understandings of and Responses to Natural Catastrophes that disease and other natural catastrophes such as earthquakes and droughts “are external agents of change that shape history and culture”.1 While Prof. Pitirim Sorokin, the foundation Professor of Sociology at Harvard University in Boston, USA said in his book Man and Society in Calamity that “for good or ill, calamities are unquestionably the supreme disrupters and transformers of social organization and institutions”.2 Finally Dr. William H. McNeill, Professor of History at the University of Chicago thinks that infectious diseases are “one of the fundamental parameters and determinants of human society”.3

This book has also argued that if the end of the Hittite Empire was due to civil war or invasion by neighbors then why was the capital Hattusa abandoned over a short period of time and not destroyed or occupied by the new victors, as the archaeological evidence has shown.

This book has shown that the 1322 bce Hittite epidemic was not the fatal blow that ended the Hittite Empire as portrayed by Prof. Wynn, Prof. Hare and Dr. Cooray and that it was not caused by smallpox, as suggested by them, but by bubonic plague. It has also listed ten possible diseases that could be implicated in the end of the Hittite Empire 120 years later, along with the end of the Bronze Age. Of those ten diseases, five are so lethal that they are still used as germ warfare agents. But, bubonic plague, tularemia and smallpox remain the main possible diseases implicated as the causes.

This book has presented a comprehensive list of sixteen possible causes for the end of the Bronze Age and shown that a multifactorial scenario ending with an increased risk of infectious disease was the most likely outcome and that how much weight is given to other cofactors depends on the country or region involved, for example, an increased risk of earthquake in Greece. The only other things that could have been ubiquitous across the whole region would have been post- volcanic or post-comet climate change, leading to drought then famine and finally infectious diseases. These diseases know no boundaries; hence they spread across the whole region.

This book has asked many questions: If wasn’t for the 1322 bce Hittite epidemic could the Hittite Empire have won the battle of Kadesh and subsequently invaded Egypt? What caused the mass migrations of the general population if not disease? What caused the mass migrations of the “Sea Peoples” if not disease? Why were cities abandoned if not for disease? and finally why are historians not focusing on disease as a possible cofactor in history, often a very significant cofactor as shown by this book? This book has also shown that infectious disease epidemics contributed to the fall of ancient Carthage and played a significant role for change in the history of the Mediterranean.

So what have we learnt from history over the millennia? We have learnt that nothing has changed when it comes to infectious disease. New plagues such as HIV/Aids, Ebola and SARS are treated in the same way as the original plagues, namely with isolation and quarantine. That new emerging and re-emerging infectious diseases such as antibiotic resistant tuberculosis are now appearing and show us how impotent we are when it comes to controlling infectious diseases. We have learned that new strains of super viruses made from the combination of human, pig and bird viruses, such as H1N1 Swine Flu will become more common in the future and have the capacity to become drug resistant, hence severely threatening mankind yet again; as did the infectious diseases that ended the Bronze Age and Hittite Empire, thousands of years ago.

We have also learnt that further investigation is needed, looking for more evidence of infectious diseases in ancient times. Archaeological digs should engage a paleoentomologist to look for the remains of bubonic plague rats and fleas for example, as bubonic plague was one of the main scourges of the ancient world. Paleoparasitologists should also be used to determine what parasites may have infected the skeleton. Paleoparasitologists could sample the soil around where the abdomen would have been, looking for the eggs of any parasites. Then all skeletons found should have DNA testing, if possible, to identify any infectious diseases in the body that may have contributed to its death, along with examination by a properly trained forensic paleoanthropologist.

Finally this book has shown that in history, the medical aspects such as infectious diseases, should be taken into consideration every time and given more weight as causal factors of events than is currently the case.

Cite this chapter as:
Norrie P. (2016) Conclusion. In: A History of Disease in Ancient Times. Palgrave Macmillan, Cham