The Recurrent and Superior Laryngeal Nerves 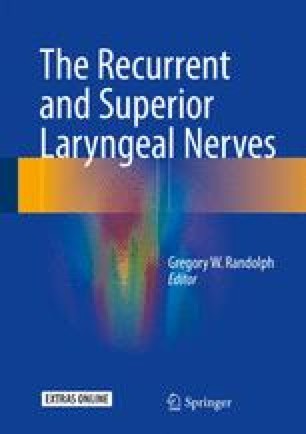 The Recurrent and Superior Laryngeal Nerves pp 169-183 | Cite as

Continuous intraoperative nerve monitoring (CIONM) is an advanced tool to improve risk management of the recurrent laryngeal nerve (RLN) by ongoing determination of vagus amplitude and latency during thyroid surgery. The advantage of CIONM compared to intermittent nerve stimulation (IIONM) becomes apparent in technically demanding operations because CIONM provides instant alerts as soon as a surgical procedure impinges on the RLN. This is why CIONM is set to overcome the principal methodological limitation of IIONM, which is identification of RLN malfunction only after the damage has taken place.

Animal and human studies have consistently confirmed the feasibility, safety, and reliability of CIONM. By implication, accurate prediction of impending RLN injury hinges on the evaluation of wave changes which indicate nerve dysfunction that ultimately may result in complete loss of electromyographical (EMG) signal (LOS). “Combined events,” defined as concordant EMG changes in both amplitude (decreases to less than 50 % of initial baseline) and latency (increase to more than 110 % of initial baseline), typically precede postoperative vocal fold palsy and are reversible in 80 % of cases upon release of the nerve. CIONM also helps identifying functional nerve recovery with restitution of the amplitude to ≥50 % of its baseline so that surgical plans can be adjusted accordingly.

CIONM can prompt corrective actions before LOS occurs. Recent evidence suggests that CIONM may afford better nerve protection than IIONM, which resulted in permanent RLN palsy rates of 0 % with CIONM vs. 0.4 % with IIONM (P = 0.019).