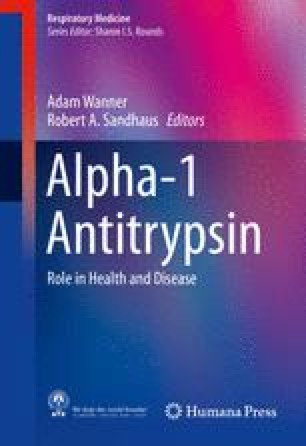 Alpha-1 antitrypsin is a positive acute phase reactant whose serum level rises in response to inflammatory stress, presumably to balance pro-inflammatory processes. In addition to its serine protease inhibitory action, alpha-1 antitrypsin exhibits broader anti-inflammatory and immunomodulatory activity, and increasing its serum concentration by the administration of exogenous alpha-1 antitrypsin to above-normal levels potentially could be therapeutic in conditions other than alpha-1 antitrypsin deficiency. In vitro observations, studies in animal models and in some instances early human trials suggest that intravenous or inhaled alpha-1 antitrypsin has beneficial effects in type 1 diabetes, viral infections, graft-versus-host disease, cystic fibrosis, and alpha-1 antitrypsin-replete chronic obstructive pulmonary disease among others. While the results of pivotal clinical trials have not been reported to date, new indications for alpha-1 antitrypsin therapy are likely to emerge in the future based on currently available scientific data.

Given alpha-1 antitrypsin’s diverse modes of action, it is not surprising that interest arose in using this protein to treat conditions such as inflammatory bowel disease [15], arthritis [16, 17, 18], ischemic heart disease [19], organ and cell transplant rejection, graft-versus-host disease, alpha-1 antitrypsin-replete chronic obstructive lung diseases, type 1 diabetes mellitus, and viral infection. The latter application is based on the role of serine proteases involved in viral entry into cells.

Most information has been obtained in type 1 diabetes mellitus, graft-versus-host disease, viral infection, and alpha-1 antitrypsin-replete lung disease, notably COPD and cystic fibrosis (Table 8.1). Furthermore, some of the related studies have not been limited to in vitro or animal observations but have also involved experiments in humans. In this chapter, we therefore will focus the discussion on the latter conditions.
Table 8.1

Finally, new formulations and applications of alpha-1 antitrypsin will require regulatory approval. For product licensing, low or lack of immunogenicity, efficacy, and safety will have to be demonstrated in the new target populations, and the trials will have to involve clinically meaningful, not just surrogate endpoints [28]. Meeting these requirements will have a major role in bringing the new alpha-1 antitrypsin products to the market and obtaining regulatory approval for them.

Other mechanisms implicated in limited graft survival also have been examined including deficient graft vascularization. For example, alpha-1 antitrypsin has been reported to stimulate vascular endothelial growth factor expression and release and to promote revascularization of islet cell allografts in an explantable compartment of the mouse pancreas [42]. Graft survival also could be limited due to graft injury by pancreatic proteases as pancreatic acinar cells have been shown to contaminate islet cell preparations and be co-transplanted with them. Acinar cell protease activity could then injure islet cells and shorten their survival. Supporting this possibility, it has been shown that the more impure the islet preparations, the greater their proteolytic activity, islet cell loss, and insulin depletion [43]. Incubation with alpha-1 antitrypsin protected the preparation from these changes, presumably by its protease inhibitory action.

The effect of alpha-1 antitrypsin on islet graft survival and function has also been investigated in a nonhuman primate, bringing the observation closer to the human condition. In subtotally pancreatectomized, streptozotocin-treated monkeys with autologous islet cell transplantation, treatment with alpha-1 antitrypsin during the peri-transplant period leads to functional islet mass expansion and improved graft function [44].

These in vitro observations have been substantiated by an in vivo study involving human subjects. A 10-day infusion of the virus inhibitory peptide in treatment-naïve patients with HIV infection reduced the viral load by a factor of 12 [32] (Fig. 8.3). Conversely, an association has been reported to exist between HIV infection and reduced serum alpha-1 antitrypsin levels [50, 51]. Taken together, the currently available information provides a basis for future clinical investigations into the therapeutic potential of alpha-1 antitrypsin in HIV-1 infection. In contrast to influenza, HIV infection is of a chronic nature and as such provides a better target for interventional studies with alpha-1 antitrypsin.

Allogenic hematopoietic stem cell or bone marrow transplantation, while in clinical use for the treatment of leukemia, can lead to graft-versus-host disease [52]. Standard immunosuppressive therapy administered to attenuate the immunologically mediated attack of the graft against the host increases the risk of opportunistic infections and impairs the graft’s antileukemia effect (graft-versus-leukemia response).

The lung disease of CF involves neutrophil elastase and its effects on mucus secretion, proteolytic destruction of airway and lung tissue, and facilitation of bacterial infection, notably by Pseudomonas aeruginosa [58, 59]. Neutrophils are recruited to lung tissue primarily by interleukin 8 (IL-8). Neutrophil elastase is released from neutrophils during migration, upon immune complex stimulation, and when they undergo necrosis or apoptosis [60]. In addition, IL-8 and tumor necrosis factor alpha promote neutrophil elastase release from neutrophils [63]. Alpha-1 antitrypsin is the most potent known inhibitor of neutrophil elastase, has other antiprotease activity relevant to CF, and is anti-apoptotic [8, 59]. However, its concentration in airway and lung tissue, even if above normal due to a presumably increased secretion by the liver, may not be sufficient to counteract the markedly augmented neutrophil elastase activity in the CF lung [56]. Given the importance of proteolytic activity in the inflammatory process associated with CF-related lung disease, it is not surprising that alpha-1 antitrypsin has been thought of as a therapeutic for this disease. Over 20 years ago, McElvaney et al. [58] administered aerosolized human plasma-derived alpha-1 antitrypsin to 12 patients with CF for 1 week. The authors showed that the treatment reduced neutrophil elastase activity in epithelial surface liquid (bronchoalveolar lavage fluid) with a critical alpha-1 antitrypsin concentration of 8 μM; treatment also stimulated Pseudomonas aeruginosa killing by bronchoalveolar lavage fluid in vitro. Since then, major advances have been made in aerosol delivery technology with devices that can now deliver up to 70 % of the filling dose to the lungs [26, 27, 62]. In addition, high-purity liquid alpha-1 antitrypsin formulations are now available, and so far short-term aerosol alpha-1 antitrypsin treatment for up to 28 days has been found to be safe [26, 27, 50, 62].

These investigations have established the biochemical efficacy of inhaled alpha-1 antitrypsin in CF but thus far have not shown any clinical benefits. However, they provide a solid basis for phase 3 trials of longer treatment duration which will be needed to detect changes in clinical outcomes.

The data reviewed in this chapter lead to several conclusions about the prospect of administering alpha-1 antitrypsin to persons suffering from conditions not caused by alpha-1 antitrypsin deficiency. Promising are the results of investigations using animal models of human diseases such as type 1 diabetes, viral infection, graft-versus-host disease, cystic fibrosis, and alpha-1 antitrypsin-replete COPD. While other conditions including ischemic heart disease, inflammatory bowel disease, and arthritis have also been considered for alpha-1 antitrypsin therapy, the research addressing them may not have reached the same level of maturity.

Early human studies have been conducted in type 1 diabetes, HIV infection, graft-versus-host disease, and cystic fibrosis. Although these investigations have established the feasibility, safety, and in some instances biological effectiveness of alpha-1 antitrypsin treatment, further trials are clearly needed to demonstrate its clinical utility.