Information Security Education Across the Curriculum 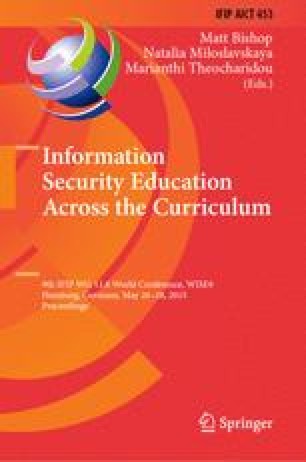 WISE 2015: Information Security Education Across the Curriculum pp 125-134 | Cite as

Honours programs in South African universities must include a research project module. There are external pressures from professional bodies and government that influences the nature of the project module. This paper presents a reflection on the process of managing the project module at a South African university taking into account internal and external demands. The focus for this paper is on the ethical content of the projects. Examples of projects are presented after which the ethical awareness of the students is discussed. Not all projects have ethical, legal or social issues, however ethical aspects need to be reflected upon and awareness of these issues is essential during the planning of the project. The awareness that students have on ethical, social and legal issues is investigated in this paper.

For many years the honours program in IT, that follows after a three-year bachelor’s degree in IT, included coursework as well as a practical project. Currently the honours program in IT at the North-West University consists of coursework (8 semester modules) and a project module. A few years ago government prescription demanded changes to the project module. These changes included a higher number of credits as well as changing the nature of the project to have research oriented content [1]. Currently the number of credits is 32, which implies roughly 320 h of work for a student during an academic year [2].

Recently our institution started a process to get accreditation for the IT program from a professional computer society. In order to align with their requirements another set of demands also surfaced for the project module. One of the main requirements is that the project module must also produce an artefact during the process and not only be a research project. Another demand is the inclusion of legal, social, ethical and professional issues (LSEPI) into the program [3]. With the increased emphasis on ethical issues within organisations as well as government and academic environments this paper explores the topic of ethics and how it is handled in the IT honours project module. The research question for this study of the project module content was: “How aware are students of ethical and related issues when doing their project?”

When reviewing current literature on this topic a leading local university’s project module documents were analysed. They indicate a twofold process to obtain permission for a project to progress. A form is completed by the student to get permission to use other students as sources of information (access to students for the purpose of research). The supervisors’ details as well as the research proposal are included in this form. This form goes to the director of student affairs. Another form that is needed is the ethical clearance which is submitted to the faculty’s ethics committee [4]. Aspects that are covered include:

Feedback on this process is usually given within a short time in order for the student to make amendments and continue with the project.

From the previous discussion it can be seen that students from this university are guided through the process to reflect on ethical issues and to obtain ethical clearance for their projects.

This paper will focus on the university where the project module has recently been changed and will demonstrate how ethics and related topics such as professionalism and social issues are handled within the project module. The layout of this paper is as follows. The research method will be discussed in Sect. 2. Section 3 presents a discussion of how this project module was managed and executed over the past number of years. Example projects will be discussed in Sect. 4. Thereafter it will be shown how the LSEP issues are incorporated into the module by doing a narrative analysis of each project. The focus in Sect. 5 is on the ethical issues that the students have to identify and reflect on. Section 6 concludes this paper with a summary and possible future work.

The main approach to make sense of the project module was to analyse each project in terms of certain factors such as key words used, having a definite Information security content or not, ethical dilemmas identified and reflection of the student and supervisor on the product and process. This paper, however, only focuses on the ethical content to align with the aims and scope of WISE.

The main source of data was the project documentation of the students, e.g. project proposals and projects reports. The proposals and reports were qualitative in nature. Therefore an approach of analysis of data was required to explore the content of the relevant parts, presenting the findings and interpreting it in a way that makes sense of the results. An in depth analysis of what was said and communicated by the students was necessary; therefore narrative analysis was the appropriate approach. Narrative analysis refers to a wide variety of approaches within many disciplines and sub disciplines where interviews and qualitative data are concerned. According to Wood and Kroger [5] the aim is to get a deeper understanding of the phenomenon under investigation. However, there is more than one way of doing this. Each project has its own questions and aims and therefore the researcher has multiple ways to do narrative analysis and interpretation [6]. In this context the reports of the students are the vessels in which content is held [7]. Different topics were examined, retrieved and categorized in order to get a deeper understanding of the ethical issues involved in these honours projects. The yes/no answers in the questionnaires were counted and are shown and discussed in Sect. 5. The students were required to elaborate on these answers and these qualitative data in the reports were analysed using a narrative approach. Short interviews with the lecturers who acted as project supervisors were also conducted and their input to the students on ethical issues will also be presented in Sect. 5 along with the students’ reflections on these matters.

The following section presents the management of the project module including some of the internal and external requirements.

The number of students in the IT honours program is between 30 and 40. Around 9 lecturers have to supervise these projects. Normally the lecturers propose project topics, however sometimes students also suggest topics that have to be in line with the necessary requirements. Previously the honours projects that were done by students differed in content and nature. Some students developed a practical system while other projects had a bigger research component. Since 2011 the government prescription that the project must be a research project changed the way in which students and lecturers approached the project [8]. Until 2013 the project module was not fixed in nature and it was difficult to get uniformity with the evaluation of the projects.

In 2014 the nature of the project was changed yet again due to the prescription of being a research project as well as producing an artefact [3]. The process of managing and supervising the project can be summarized as follows [2, 8]:

As can be seen in the above list ample help was provided to the students regarding time and process management. Regarding ethical issues an effort was made to inform students about ethical and related issues though lectures, references and examples.

The following section describes a few of the projects that were completed during the previous year(s) indicating the variety of project topics.

Students can choose from a range of topics for possible projects offered to them at the beginning of the year. These proposals come from the lecturers that have to take on honours projects. These topics originate from their own fields of interest or expertise or research areas. The students select 5 topics in order of their preferences. A committee allocates a topic to each student in such a manner as to assign them, as far as possible, one of their top 3 choices in order for them to be positive towards their topic from the start of their project.

Examples of project topics, with aims or descriptions as well as an indication of possible ethical issues, are [8]:

These examples indicate the variety of topics and different fields of interest of supervisors and students. Some project topics have obvious ethical issues while with others such issues only become apparent at later stages.

The next section presents the analysis of the contents of the projects regarding the ethical questionnaire that the students have to complete as part of their project planning as well as their own reflections of these issues.

Each student has to complete a questionnaire on ethical issues pertaining to their project topic. This questionnaire was developed from example documents, guidelines from the university and prescriptions from external bodies. 33 project reports were used as data and analysed. The questions that were asked in the questionnaire, which they had to reflect upon and get more information on, are listed in Table 1.
Table 1.

Responses of students to ethical questionnaire

Figure 1 presents the seven questions and the responses of the students in a bar graph. It can be seen that the last 3 questions have the most “NO” answers. This may indicate that the ethical concerns relating to people, the environment and the university is minimal. It is not zero, therefore, these issues must definitely be reflected upon and ethical awareness of students is thus necessary.
The students had to expand on the ethical and legal issues that applied to their projects. The following indicates some of these reflections:

The above points demonstrate that students did indeed reflect on social, legal and ethical issues. Table 1 and Fig. 1 indicate in how many of the projects these aspects are present.

After interviewing the supervisors and moderators the following aspects came forth:

After the analysis of the interviews with supervisors as well as the students’ project documentation a concern that emerged was that the supervisors did not reflect deeply on the ethical aspects and they were easily satisfied that the students did it adequately. Another concern was that not all questions were answered. This should not be allowed.

Legal, social, ethical and professional aspects within IT are important and students must be equipped to identify these issues and reflect on how to handle this. The way the ethical questionnaires were filled in and discussed indicates that more guidance is necessary from the supervisors.

The research question that was posed in Sect. 1 was investigated by analysing the narrative content of the students’ project documentation. From this analysis it is seen that the students have an adequate sense of ethical and related issues and can approach their work in an ethically responsible manner. However continuous exposure to the importance of LSEP issues remains a challenge in the IT curriculum.

The following section concludes this paper with a summary and some final thoughts.

This paper presented a reflection of the handling of the project module for the IT honours program. The manner in which the project module is currently being managed under internal academic demands, external demands from government as well as accreditation requirements was discussed.

Examples of projects were presented (some with specific Information Security content) indicating the increasing importance of the topic of security awareness and expertise of students completing their studies in IT. It is shown how ethical, legal and social issues are included in the project. Lessons learnt from the process are shared in this paper.

Key aspects that came forth from this study include:

For future work reflection of the project process and product is needed and external bodies’ input must be evaluated and incorporated into the management of the project module. IT students’ awareness, expertise and knowledge regarding ethical issues need to be relevant and processes followed must be adaptable for current and future demands of the industry and related professional IT bodies.