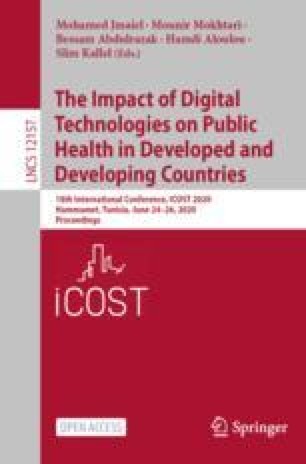 ICOST 2020: The Impact of Digital Technologies on Public Health in Developed and Developing Countries pp 79-88 | Cite as

Ballistocardiogram signals describe the mechanical activity of the heart. It can be measured by an intelligent mattress in a totally unobtrusive way during periods of rest in bed or sitting on a chair. The BCG signals are highly vulnerable to artefacts such as noise and movement making useful information like respiratory activities difficult to extract. The purpose of this study is to investigate a classification method to distinguish between seven types of respiratory activities such as normal breathing, cough and hold breath. We propose a feature selection method based on a spectral analysis namely spectral flatness measure (SFM) and spectral centroid (SC). The classification is carried out using the nearest neighbor classifier. The proposed method is able to discriminate between the seven classes with the accuracy of 94% which shows its usefulness in context of Telemedicine.

The development of connected object for personalized services, especially for monitoring purposes, have significantly increased worldwide over the last few years [1]. More specifically those that deals with the monitoring of respiratory and cardiac diseases. Indeed these diseases are among the leading cause of death and disability in the world. One of these respiratory diseases is the Chronic Obstructive Pulmonary Disease COPD [2] a progressive life threatening lung disease. According to the World Health Organization [3], COPD affects more than 250 million cases globally, a staggering 3.17 million deaths per year and is associated with a huge economic burden. In fact, numbers published by the Global initiative for Chronic Obstructive Lung Disease [4] shows that the direct costs of respiratory disease in the European Union are estimated to be about \(6\%\) of the total annual healthcare budget with COPD accounting for \(56\%\) (38.6 billion Euros) of the cost of respiratory disease. These numbers are further amplified by the ever-growing healthcare costs, the aging of the population and the widespread of such diseases. The monitoring of respiratory activities plays an important role in the current management of patients with acute respiratory failure [5]. As a consequence, it is recommended to have continuous monitoring of the vital signs to ensure an optimal diagnosis of a patient’s state [6]. Moreover, monitoring of respiratory activity is useful for detecting respiratory disorders, such as the sleep apnea, cessation of breathing in infants, shortness of breath in patients with heart failure, and so on. Hence, it is important to monitor respiratory activities such as normal breathing, cough, hold breath expiration.

A new generation of sensor-based mattress is able to unobtrusively monitor vital signs such as the Heart rate Beat Rate (HBR) and the Respiratory Rate (RR). Indeed, this study considered an Optical Fiber based Sensor (FOS) [7] for the unobstructed monitoring of the Ballistocardiogram (BCG) signal. Due to the ejection of the blood during the systole, the body’s mechanical reaction is measured hence the BCG signal. Our aim is to investigate a classification method to distinguish between several types of respiratory activities such as normal breathing, cough and hold breath using the BCG signal.

This paper is organized as follows. Section 2 is dedicated to describe the material and method. It describes the data collection, BCG signal analysis and feature extraction and classification. Section 3 provides information about the experimental results mainly feature illustration and classifier evaluation. Finally, Sect. 4 concludes the study and gives perspectives.

The system used for collecting data includes a small FOS mattress and a module to gather optical data coming from the mattress [8, 9]. The FOS mattress was fixed on the back of a regular office chair. The raw data is sampled at 50 Hz by the module.

The BCG signals were acquired on 6 healthy participants: 3 male and 3 female aged between 21 and 32 years. The participants were asked to perform a certain experimental protocol. A part of normal breathing, other human body activities that commonly occur are introduced in this protocol. It is composed of the following steps by following activities: normal breathing (C1), cough (C2), Normal breathing after cough (C3), hold breath (C4), expiration (C5), movement (C6). We also consider a class other to regroup all other activities (C7). Figure 1 illustrates an example of the BCG signal. The different human body activities are plotted in different colors. The objective is to highlight the differences in the BCG signal according to the activity.

In this subsection we inspect the effect of different activities in the BCG signal. Figure 2 illustrates five different activities. In the plot illustrating Normal respiration (C1), we can easily extract both the HBR and RR, the big period corresponds to the movements of the thoracic cage. By extracting the distance between two consecutive peaks of this waveform, we can extract the RR. The small period appearing in the BCG signal represents the heart beats. The extraction of these little fluctuations results in the extraction of the HBR.

The signals corresponding to the cough (C2) and movement (C6) are very similar. Both signals attain the upper limit of the acquisition equipment which is explained by the broad peaks in the BCG signals. We believe however that these broad peaks have different explanations. The peaks in the movement signal comes from the acceleration of the subject’s body and the peaks during the cough comes from the reaction of the body after coughing.

The post-cough normal breathing is corrupted and we can hardly find the peaks of the respiratory activity. The peaks are broader and that results in a lack of precision of HBR and RR.

The holding breath BCG contains only cardiac information. The periodicity is clearly noticed which was not obvious in other activities.

This analysis of the BCG signal’s content motivates the use of an approach based on the characterization of the useful frames. This particular problem is complex and thus is demanding when it comes to the choice of the features with physical significance. In the next subsections, we will define the features and try to highlight the intuition behind each one of them.

A periodic signal can be represented as a sum of sine waves and thus the Fourier transformation of this particular signal will be spiky. This statement motivated the idea of using the following two features: Spectral Flatness Measure (SFM) and Spectral Centroid (SC).

Let x(n) be a BCG signal. The later is decomposed into frames of short duration. These frames should be long enough to carry information about the activity but not too long to avoid an overlap of two or more different activities. In the frequency domain, the short-term Fourier transform is calculated and its amplitude is extracted. It is denoted |X(m, k)|, where m is the frame index and k is the discrete frequency.

BCG Feature Engineering: The SFM and SC measures have been evaluated on each frame of the BCG signal. However, in order to avoid complexity that comes with it (overlap noise propagation, presence of different labels in the same frame, frames too small to be representative...), we propose to create a time-series out of the SFM and SC values in each frame.

The \(sfm_{signal}\) and \(sc_{signal}\) are then used for the purpose of classification.

Respiratory activities classification has been performed using a K-nearest neighbors classifier. It is a non-parametric classification method which classifies a sample based on a plurality vote of its neighbors. The sample is assigned to the class most common among its K nearest neighbors (K is a positive integer) in terms of minimal distance. The algorithm adopted is Fine KNN which is the finest variation of KNN since it labels the new input with the same label as only one of its nearest neighbour \(K=1\). The evaluation of the algorithm as well as the classification results were conducted using k-fold cross validation with \(k=5\).

The classification performance is evaluated in terms of true positive rate and positive predicted value.

This section illustrates the feature analysis and interpretation by providing the means of the SFM and SC for each activity.

The BCG signal we are working with is the same displayed on Fig. 1. The mean values are given in Table 1. We note that the normal breathing mean value of the SFM is the lowest which confirms the periodicity hypothesis. The values of SFM and SC taken during the coughing portion (C2) as well as the movement portion (C6) are relatively high which further confirms the non-periodicity in the corresponding portions.

For the post-cough breathing, we notice that, unlike the portion of normal breathing, the values of the descriptors are high and close to those during the movement and coughing activities which supports our choice to isolate these portions.

The closest values of the descriptors to the ideal ones (those of the normal breathing) are the values recorded during the holding breath, this is due to the fact that the portions of holding breath are periodic and carry only the heart rhythm information.
Table 1.

Mean value of SFM and SC during each activity.

Figure 3 show the \(sfm_{signal}\) of some activities. In the top right, the normal respiration phase is considered. The values of SFM are low as expected to be. This fact is due to the clear periodicity in that activity. The SFM of holding breath (down left plot) is pretty low and that is as well an expected result since there’s the cardiac information in the holding breath activity. Both cough and movement activities (right plots) manifest big fluctuations in their respective \(sfm_{signal}\), this is due to the absence of periodicity in these signals.

Using the \(sfm_{signal}\) and \(sc_{signal}\) we obtained a classification rate of 94%. Figure 4 shows the TPR confusion matrix. We can observe that our model performs very well overall. The TPR value appears in the diagonal of the confusion matrix. Most of the errors are detected in the class C4, where \(31\%\) of the latter (corresponds to the class: holding breath) is predicted as normal respiration. This result is expected since the periodicity in the holding breath portions is present due to the cardiac activity. We observe as well a high confusion between the class cough (C2) and the class movement (C6). This is due to the fact that our predictors are well equipped to detect the existence of the periodicity in the portions.
Figure 5 shows the PPV confusion matrix. We can observe the confusion between the classes C1 and C4 (\(7\%\)) in terms of PPV this corresponds to a high false-alert rate (the majority of false alerts in the class: Normal respiration are recorded as Holding breath) which further confirms the similar periodicity hypothesis mentioned in the previous paragraph we can also pinpoint an alarming \(13\%\) with the class C5 which is due to the lack of the adopted features when it comes to differentiating between the highly non-periodic portions.

In this study we investigated the respiratory activity classification based on the BCG signal. We used a reconstructed time-series signal from the spectral flatness measure (SFM) and spectral centroid (SC) of the raw data. We obtained a classification rate of 94% which show the effectiveness of the proposed method. The supervised classification process, however, is demanding when it comes to data and computation. Treating the feature extraction process by generating a time series is a novelty which motivates the use of more sophisticated deep-learning algorithms such as the Long Short Term Memory LSTM as one of the most used Recurrent Neural Network RNN architectures in time series related problems.