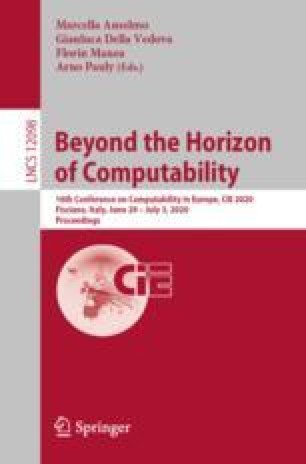 Theoretical and Implementational Aspects of the Formal Language Server (LaSer)

LaSer, the formal language server, allows a user to enter a question about an independent language and provides an answer either in real time or by generating a program that can be executed at the user’s site. Typical examples of independent languages are codes in the classic sense, such as prefix codes and error-detecting languages, or DNA-computing related codes. Typical questions about independent languages are the satisfaction, maximality and construction questions. We present some theoretical and implementational aspects of LaSer, as well as some ongoing progress and research plans.

We present some theoretical and implementational aspects of LaSer, as well as some ongoing progress and research plans.

LaSer’s backend is based on the Python package FAdo [8], which implements automata, transducers, and independences described by transducer objects in the module codes.py [17]. The choice to use FAdo is based on the facts that its installation is very simple, it contains a rich set of easy to use methods, and is written in Python which in turn provides a rich availability of high level methods.

Three examples of independences that are not of the form \(\mathcal {P} _{\varvec{t}}\) are the following.

We now discuss possible approaches of representing non-transducer independences as finite objects in a way that these objects can be manipulated by algorithms which can answer questions about the independences being represented. Some approaches are discussed in [15, 19]. It is important to note that there is a distinction between the terms “property” and “independence”. A (language) property is simply a class (set) of languages. A (language) independence is a property \(\mathcal {P}\) for which the concept of maximality is defined, that is, \(\mathcal {P} \) must satisfy

We propose to investigate further the rational language equations defined here as well as in [15]. Topics of interest are maximality, embedding and expressibility6 as well as enhancement and implementation of algorithms involved. Some of these topics could be complex. For example, the maximality question for transducer independences can be answered by a simple algorithm, but the question is PSPACE hard. The embedding question is to construct a maximal independent language containing the given independent language \(\mathtt {L} (\varvec{a})\). For transducer independences described by Eq. (4), the embedding question is addressed in [16]. The maximality and embedding questions for non-transducer independences appear to be far more complex. For the satisfaction question of independences described by rational language equations, a useful question is to define and implement witnesses of non-satisfaction. For example, a witness of non-satisfaction for equation (2) would be a word triple (x, y, z) such that \(x,y,z\in L\) and \(xy=uzv\) for some nonempty words u and v.

We thank the anonymous referees for constructive comments.