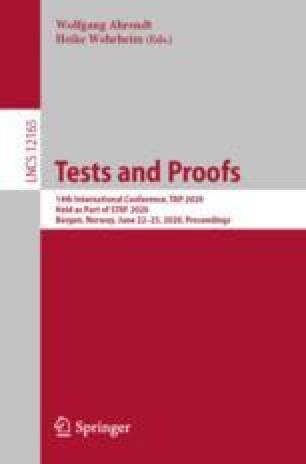 International Conference on Tests and Proofs

We present ScAmPER, a tool that generates test suites that maximise coverage for a class of interactive fiction computer games from the early 1980s. These games customise a base game engine with scripts written in a simple language. The tool uses a heuristic-guided search to evaluate whether these lines of code can in fact be executed during gameplay and, if so, outputs a sequence of game inputs that achieves this. Equivalently, the tool can be seen as attempting to generate a set of test cases that maximises coverage of the scripted code. The tool also generates a visualisation of the search process. 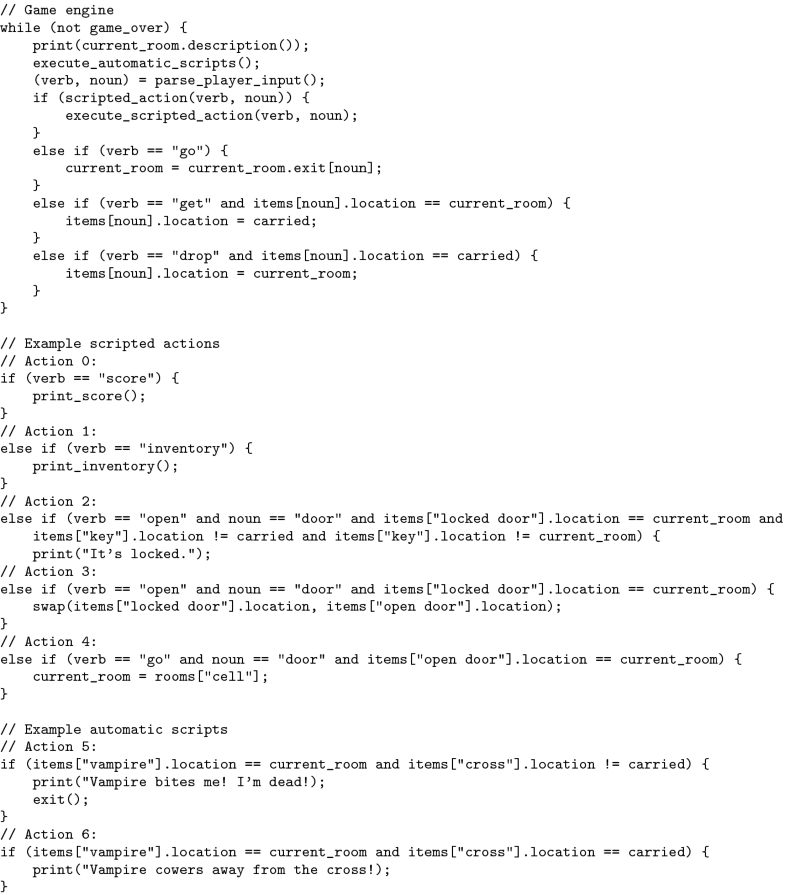 In an interactive fiction game, the computer displays a textual description of the player’s location. The player types a command, such as “GO NORTH”, “GET KEY” or “OPEN DOOR”. The computer parses the command, evaluates its effect on the game world, and displays a textual description of any outcomes. The process repeats until the player wins (for example, by defeating a monster or finding a treasure) or loses (often by dying).

The most popular of the generic interactive fiction interpreters was Infocom’s Z-Machine. However, its flexibility, which allows games to include their own customised command parsers, makes it a difficult target for automated analysis. Instead, we decided to tackle an earlier and simpler format, namely Scott Adams Grand Adventures (SAGA) and the corresponding open-source interpreter ScottFree [2]. This format supports only very limited scripting, which makes the behaviour of the games far less dynamic.

Games consist of a fixed number of rooms and objects (usually 20–40 each). Commands consist of one or two words (a verb and a noun), which are taken from a fixed list. The player can move between rooms and pick up and drop objects; this is hard-coded into the engine. A limited scripting system allows the behaviour of each game to be customised. Scripts allow the player to trigger special events by entering certain rooms or typing certain commands, provided a guard consisting of a conjunction (AND) of conditions is satisfied. Examples of conditions that can be checked include the location of a certain object or the value of a finite number of flags and bounded counters. Examples of events include moving objects, moving the player, displaying messages and adjusting the values of flags and counters (Fig. 5).
Figure 6 shows pseudocode illustrating the structure of the game engine and some possible scripted events. Despite the relatively simple structure of the engine, the open source implementation ScottFree is around 1,500 lines of C, of which around 600 implement an interpreter for the scripting language. Scripts can check around 20 different kinds of condition and trigger around 40 different kinds of event. The state space of a game is finite but too large to enumerate. Its size is dominated by the potential for any movable object to be in any room, ranging from roughly \(2^{40}\) combinations in adventure 11 to \(2^{114}\) in adventure 9.