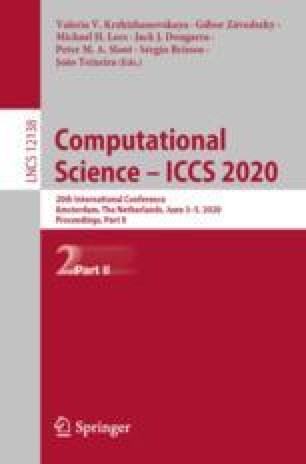 We investigate a residual minimization (RM) based stabilized isogeometric finite element method (IGA) for the Stokes problem. Starting from an inf-sup stable discontinuous Galerkin (DG) formulation, the method seeks for an approximation in a highly continuous trial space that minimizes the residual measured in a dual norm of the discontinuous test space. We consider two-dimensional Stokes problems with manufactured solutions and the cavity flow problem. We explore the results obtained by considering highly continuous isogeometric trial spaces, and discontinuous test spaces. We compare by the Pareto front the resulting numerical accuracy and the computational cost, expressed by the number of floating-point operations performed by the direct solver algorithm.

The stability of a numerical method based on Petrov-Galerkin discretizations of a general weak form relies on the famous discrete inf-sup condition (see, e.g., [13]): “Babuška-Brezzi condition” (BBC) developed in years 1971–1974 at the same time by Ivo Babuśka, and Franco Brezzi [14, 15, 16].

There are many methods constructing test functions providing better stability of the method for a given class of problems [17, 18, 19, 20]. In 2010 the Discontinuous Petrov-Galerkin (DPG) method was proposed, with the modern summary of the method described in [21, 22]. The key idea of the DPG method is to construct the optimal test functions “on the fly”, element by element. The DPG automatically guarantee the numerical stability of difficult computational problems, thanks to the automatic selection of the optimal basis functions. The DPG method is equivalent to the residual minimization method [21]. The DPG is a practical way to implement the residual minimization method when the computational cost of the global solution is expensive (non-linear).

There is consistent literature on residual minimization methods, especially for convection-diffusion problem [23, 24, 25], where it is well known that the lack of stability is the main issue to overcome. In particular, the class of DPG methods [26, 27] aim to obtain a practical approach to solve the mixed system by breaking the test spaces (at the expense of introducing a hybrid formulation).

Recently, in [28] a new stabilized finite element method based on residual minimization was introduced. The method consider first an adequate discontinuous Galerkin formulation. Then, the wanted solution is obtained by solving a residual minimization problem in terms of a dual discontinuous Galerkin norm. As in DPG methods, the method delivers a stable approximation and an error estimator to guide the adaptivity. However, its main attractive relies in that it allows to obtain a solution in a conforming sub space with the same quality of those ones obtained with the discontinuous Galerkin formulations. Last is evidenced by the authors considering standard Lagrange FEM polynomials.

In this paper, we explore the extension of [28] to IGA. We investigate the possibility of considering highly-continuous B-splines spaces as trial and broken B-spline spaces as test. We focus on the stationary Stokes problem, that requires special stabilization effort (see [29, 30, 31, 32, 33]). Due to the large range of subspaces that can be considered as trial spaces, we perform experimentations considering different setups of conforming trial spaces contained in a given broken B-spline space of degree 4. We solve the global system calling the MUMPS solver [34, 35, 36], and we compare the obtained results in terms of computational cost and accuracy of the obtained solution.

In this section we briefly discuss, in an abstract setting, the main idea behind the discontinuous Galerking based residual minimization method introduced in [28] in the isogeometric context.

Following Remark 6.14 from [37], in practice we can ignore the zero mean-value constrain (13) in the spaces for the pressure, and call MUMPS with pivoting. Then, a zero mean-value solution can be recovered by post-processing the solution as \(p = p-\frac{1}{|\varOmega |} \int _{\varOmega }p\).

We notice that couple of spaces a), b) and c) are stable in the classical isogeometric case (see [39]), while the couple d) is not.

(23)
In Tables 1, 2, 3 and 4 we show the \(L^2\)-error in the approximation of the functions \(\mathbf {u}\), p and \(\mathrm {div}\, \mathbf {u}\), obtained by considering a fixed mesh of size \(20\times 20\), and the extreme allowed continuities for the Taylor-Hood type, Raviart-Thomas type, second order Nédélec type, and equal-order type trial spaces respectively. We also show the number of flops required for the resolution of the corresponding saddle-point problem (see Equation (11)). As expected, all the selected trial spaces deliver good approximations for the measured quantities. Moreover, there is no a significative difference in the approximation when considering a highly-continuous trial space, while the total number of flops is reduced in almost two orders of magnitude, when compared with its \(C^0\)-trial equivalent, and the highly-continuous equal order type trial is the one that delivers a better balance between accuracy and computational cost. Last can be also appreciated in Fig. 1, where we plot the Pareto front for the previous results (see [41]), considering the the number of floating-point operations (as performed by the MUMPS direct solver) as the vertical axis, and the numerical error measured in the \(|||(\cdot , \cdot )|||\)-norm, defined in Equation (22), as the horizontal axis.
Table 1.

Velocity \((u_1,u_2)\) and pressure p on a series of uniformly adapted meshes. With the spirit of exploring the behavior of the method when the solution is non-smooth, as second example we consider the well-known lid-cavity flow problem (see eg. [42]).

The problem models a plane flow of an isothermal fluid in a square lid-driven cavity of size \((0,1)^{2}\) (cf. [43]). The pressure solution in the problem exhibits two singularities at the corners, as presented on right panel in Fig. 3. For the numerical simulation, we enforce the Dirichlet boundary conditions for the velocity field in terms of a small parameter \(\varepsilon >0\), to obtain a solution with Dirichlet trace belonging to \(H^{1/2}\) (see left panel in Fig. 3). For the pressure, we fix its value at one point, which is numerically equivalent to setting the condition (13). We set a homogeneous force \( f = 0\). We consider the spaces \(W_h = S^{4,4}_{-1,-1} \times S^{4,4}_{-1,-1}\) and \(Q_h = S^{4,4}_{-1,-1}\) for as test for the velocity and pressure respectively, and the spaces \(V_h = S^{4,4}_{3,3} \times S^{4,4}_{3,3}\), \(P_h = S^{4,4}_{3,3}\) as trials for the velocity and pressure respectively, that we recall it is not stable in the classical isogeometric sense (cf. [39]). In Table 5, we plot the components of the discrete velocity field, and the discrete pressure field obtained considering several uniform meshes. As can be appreciated from the figures, also in this scenario the method delivers stable and accurate approximations, even if a highly-continuous space is chosen as trial, evidencing the performance of the method.

We investigated a Discontinuous Galerkin (DG) based residual minimization (RM) stabilization for isogeometric analysis (IGA) simulations of the stationary Stokes problem. We explore the results obtained when considering a fixed DG-type test space and several types of conforming trial spaces. The higher continuity spaces result in a lower computational effort of the solver due to the reduction of the number of degrees of freedom, without affecting significantly the approximation. Moreover, the upper error bound constant is reduced when the continuity is increased, leading to a sharper estimation of the error in terms of the analytical solution. The method is also able to capture singularities even is considering a highly-continuous trial space, as evidenced with the well-known lid-cavity flow problem in the numerical section.

As future work, we plan to extend the analysis to other kind of mixed formulations, such as the Ossen and Maxwell equations [44, 45, 46], as well as exploring parallelization techniques for the resolution of the saddle-point problem [47], and localized adaptive mesh refinement techniques based on the residual estimator (10). The future work will also involve incorporating of the DG method mixed with residual minimization formulation within adaptive finite element code [42, 48].