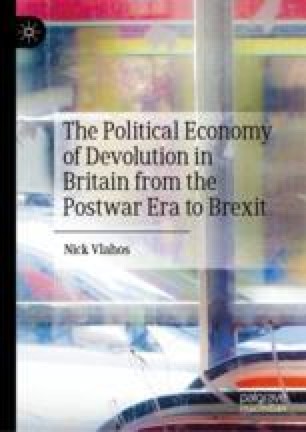 The Struggles over Scale Commitments from 1970 to 1997

This chapter examines decentralized institutional changes to the national, regional and local levels from 1970 to 1997. The time frame is important because of the paradigm shift from Keynesianism to neoliberalism in Britain, and across Western democracies more broadly. The previous chapter argued that partisan struggle was apparent throughout the ‘consensus’ years and noted how tumultuous industrial relations became the norm by the late 1960s. This atmosphere carried forward to the point of instability in the 1970s and influenced an attempt to politically restructure the British state at the end of the 1970s. At the national level, ideological factions pushed to the forefront of party caucuses, causing rifts and new strategic policy directions. Meanwhile, subnational actors constantly mobilized against the Conservative and Labour parties. Where reform was sought, political economy was relevant to how, if any, restructuring was taking place. Overall, the national level was preserved but the divisiveness of central-subnational relations led to constitutional changes in the 1990s.

Cite this chapter as:
Vlahos N. (2020) The Struggles over Scale Commitments from 1970 to 1997. In: The Political Economy of Devolution in Britain from the Postwar Era to Brexit. Palgrave Macmillan, Cham